Contributing evo photographer Dominic Fraser has been spending his lockdown recreating iconic rally scenes from his kitchen table, and is winning instagram 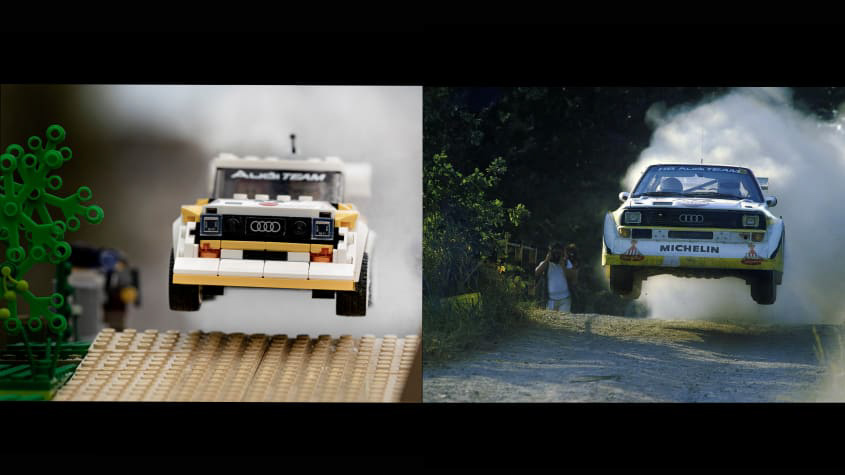 If you are one to lurk on Instagram you might have liked a post or two from evo photographer Dominic Fraser (_fraser73) featuring Audi’s legendary Quattro rally car and some Lego. You see, in a bid to not allow the current Covid-19 situation to stifle his creativity, he’s rounded up his kid’s Lego and unpacked his pro camera kit to brilliant effect.

But why the Quattro? And why Lego?

‘“Why the Quattro” is simple: it’s my favourite rally car of all time and no one has done it better before or since,’ says Fraser. ‘I grew up with that car and for me that Audi is world rallying.’

‘There are so many iconic photographs of it in action that I’ve admired for decades, and still do, that I tried to think of a way to create a homage to them. I thought about using a die-cast model, but Lego was such an obvious choice because you could recreate the whole picture with buildings and people to scale. With maybe only a bit of artistic licence…’

The project is simple. Fraser finds an old picture featuring the legendary Audi in action and sets about using his kid’s Lego to recreate the scene, including spectators, while ‘his’ Lego Audi Quattro is centre stage. ‘I sometimes print out the background of the original photo to add some depth, but the rest is all Lego. And some flour.’ The flour is to recreate snow, with various other kitchen ingredients used for mud and dust.

‘The other reason for doing it was to avoid joining the lookback lockdown hashtag! I also have all my camera equipment sitting around that I would normally use for automotive press work or magazine tests, so rather than it gathering dust it’s being put to use.’

And some use, too. Because while the statics are worth a like and a share, Dom’s next challenge is to build a tracking rig so he can film his Quattro in action. And once he’s exhausted the Audi’s WRC successes? ‘My next model is to recreate some of the most iconic photographs from the 1964 and 1967 WRC season using an original Mini Cooper. After that? Hopefully everything will be back to normal before that time comes!’