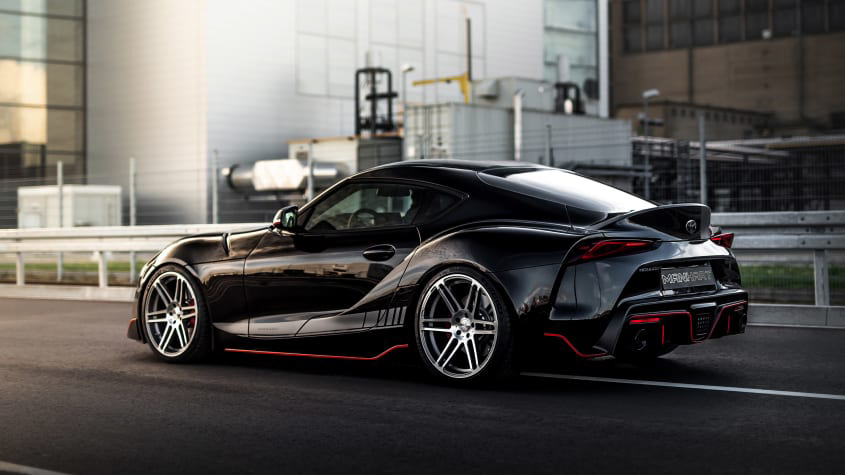 The A90 Supra certainly doesn’t lack straight-line performance, but as you’d expect, plenty of tuners have already extracted plenty more power from its six-pot power plant. Wuppertal-based Manhart has added a substantial chunk of power, with handling and aesthetic tweaks coming alongside.

Should you follow the world of tuned cars, you’d know that Manhart primarily works with BMWs, but thanks to Toyota’s collaboration with the Munich marque, it has applied its expertise to the new Supra. Boasting the same B58 power plant you’ll find in the Z4 M40i (and any other 40i product for that matter), the tuner’s €2000 (approx. $2180) ‘MHtronik powerbox’ lifts numbers to levels that might concern even full-fat M-cars.

Some 444bhp and 479lb ft of torque are the headline figures, up a healthy 108bhp and 111lb ft over standard. No new performance numbers have been provided, but it’s safe to say you’ll see an improvement over the factory 4.3sec 0-100kph sprint.

Aside from the additional power, Manhart is offering suspension upgrades to improve handling. Lowering springs can be had for €333 (approx. $360). However, just shy of €3000 (approx. $3250) will afford you a new KW suspension set-up for the ultimate transformation.

Of course, no tuned car would be complete without a new exhaust system, and so a range of exhaust modifications are on offer. Ranging from a simple OPF-delete for the standard system, to the removal of the catalytic converter for ‘export and motorsport use only’ (of course), Manhart has you covered.

New 20-inch wheels in either black or silver finishes are priced at €2800 (approx. $3,000), with a ‘decorative vinyl’ set also on offer to help set your tuned Supra apart from the rest.