Porsche’s all-electric Mission E has officially been named ahead of production: Taycan. The long-awaited Tesla Model S rival was first introduced as a concept at the 2015 Frankfurt motor show and has since been confirmed for production. Porsche has also confired it plans to introduce a range of fully electric performance cars and SUVs alongside its conventional models, as well offering some of its sports cars with EV powertrains, including the next generation 911.

The confirmation of the Taycan name comes ahead of the car’s 2019 launch and was announced by Porsche’s CEO Oliver Blume at an event to mark the company’s 70th anniversary. Earlier this year Porsche revealed its second electric vehicle at the Geneva Motor Show: the Cross Turismo Concept. This smaller, Macan sized concept is expected to go on sale in 2020 and will rival Jaguar’s recently launched I Pace electric SUV.

Porsche has been coy on specifics of the production car, but the later concept car mentioned above does share interesting details with pre-production test mules, namely production-ready mirrors, headlights and door handles. These details are often tell-tale signs of a concept car being close to production. As a result, we suspect that the numbers quoted for the Mission E Cross Turismo might be more relevant than the ones associated with a normal concept car.

Inside, the Cross Turismo is also full of near-production elements, such as an airbag-fitted steering wheel and familiar switchgear to that seen in those test cars. Although this is all speculative at the moment, the parallels between the concept and test mules are hard to overlook, pointing towards the Cross Turismo being our best look yet at Porsche’s most interesting new model.

Built on a bespoke all-new electric platform, the Taycan will not be based on any current Porsche, or indeed VW Group model. Acting as an electric-propulsion halo model across all of the Volkswagen Group brands, the Taycan is expected to introduce a suite of new technology and user interface tech. Similar to the Tesla Model S, the Taycan sits on a ‘skateboard’-style chassis, with its batteries organised into a thin slab underneath the main body.

On each axle will sit an electric motor, generating a combined 592bhp power output. Porsche claims that the Mission E Cross Turismo concept is able to reach 100kph in under 3.5sec and reach a 250kph limited top speed. We have plenty of reason to believe that these are the benchmarks Porsche has set for the production Taycan, too, although again, this has not been confirmed by Stuttgart.

Like its American rival, the skateboard platform gives the Taycan an incredibly low centre of gravity, which should help the electric saloon handle as well as we expect a Porsche to. A trade-off is a high weight figure, a consistent problem with all electric cars that incorporate enough batteries to ensure a high range figure. Speaking of which, Porsche has quoted a range of around 483 kilometres for the Mission E Cross Turismo concept, a figure we expect to be achievable by the time the production Taycan reaches showrooms.

Part of the original Mission E Concept’s positive response came directly from a new aesthetic taking advantage of the new packaging set. Accentuating the fact the Mission E Concept does without a traditional internal combustion engine, Porsche’s designers lowered the front bonnet as much as possible, creating a thin body-side, exaggerated by the massive concept car wheels.

The Mission E Cross Turismo clearly follows this theme, but does so in a new estate-like body, much like the Panamera Sport Turismo. Pointing towards a possible future production variant, the Cross Turismo differs from the original concept by adopting normal door openings, rather than the suicide doors of the 2015 concept.

Looking at the test mules, it’s obvious the wild proportions of the concept have been dialled down, but in typical Porsche style hold on to the same basic look. With Porsche’s habit of glacial design evolution, the Mission E should encourage similar design cues in other models in the range. 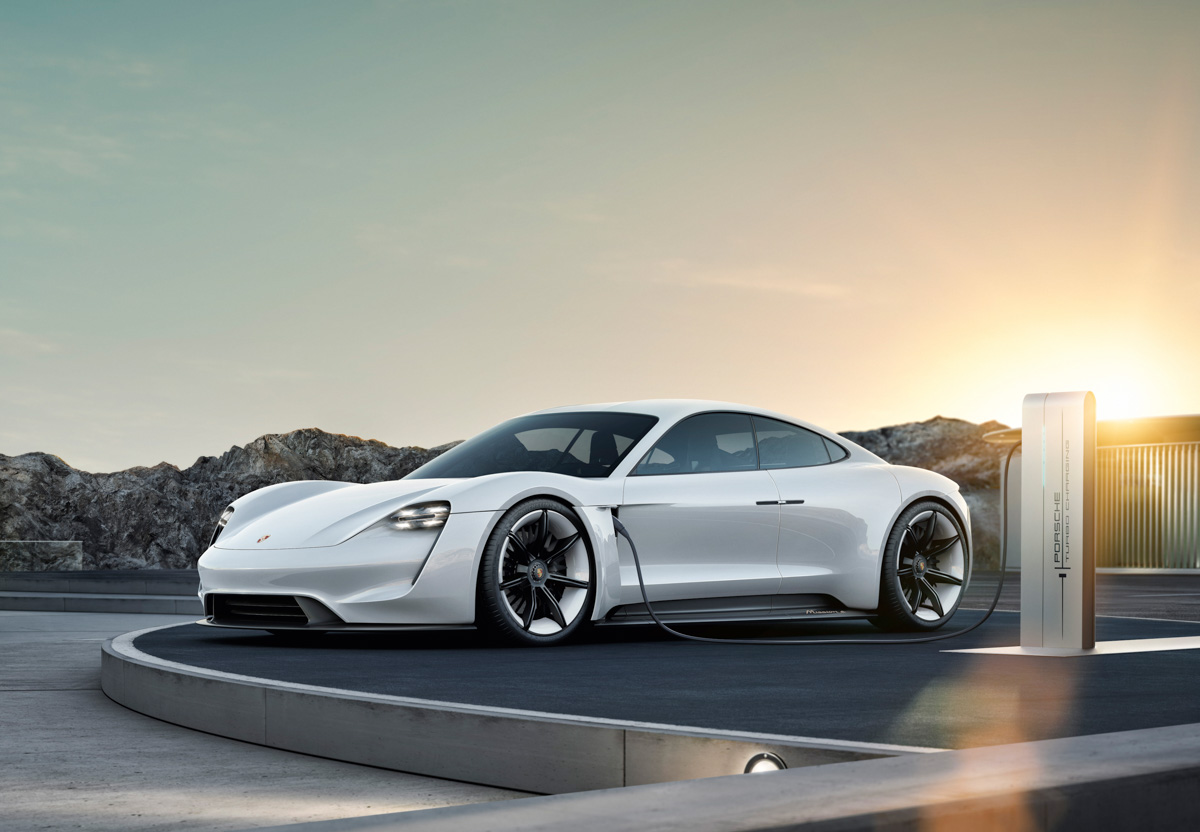 Power for the Mission E Concept car is quoted at 592bhp courtesy of two electric motors, with a technical make-up similar to those utilised in the 919 Hybrid LMP1car. 0-100kph is dealt with in 3.5sec, and 0-200kph is dispatched in ‘under 12 seconds’.

The electric platform is supposedly capable of propelling the Porsche round the Nürburgring in less than eight minutes. Incidentally, the electric range is rated at 500 kilometres, putting it on a par with Tesla’s Model S P90D. Equipped with an 800V charger unit, 80 per cent of the full range can be replenished in 15 minutes. The car also has the provision for wireless charging.

Starting with the first Cayenne hybrid in 2010, Porsche has embarked on an electrification strategy in preparation for governmental regulations and consumer demands, which has since birthed the 918 Spyder and electrified Panamera and Cayenne models, as well as the 919 Hybrid racer. 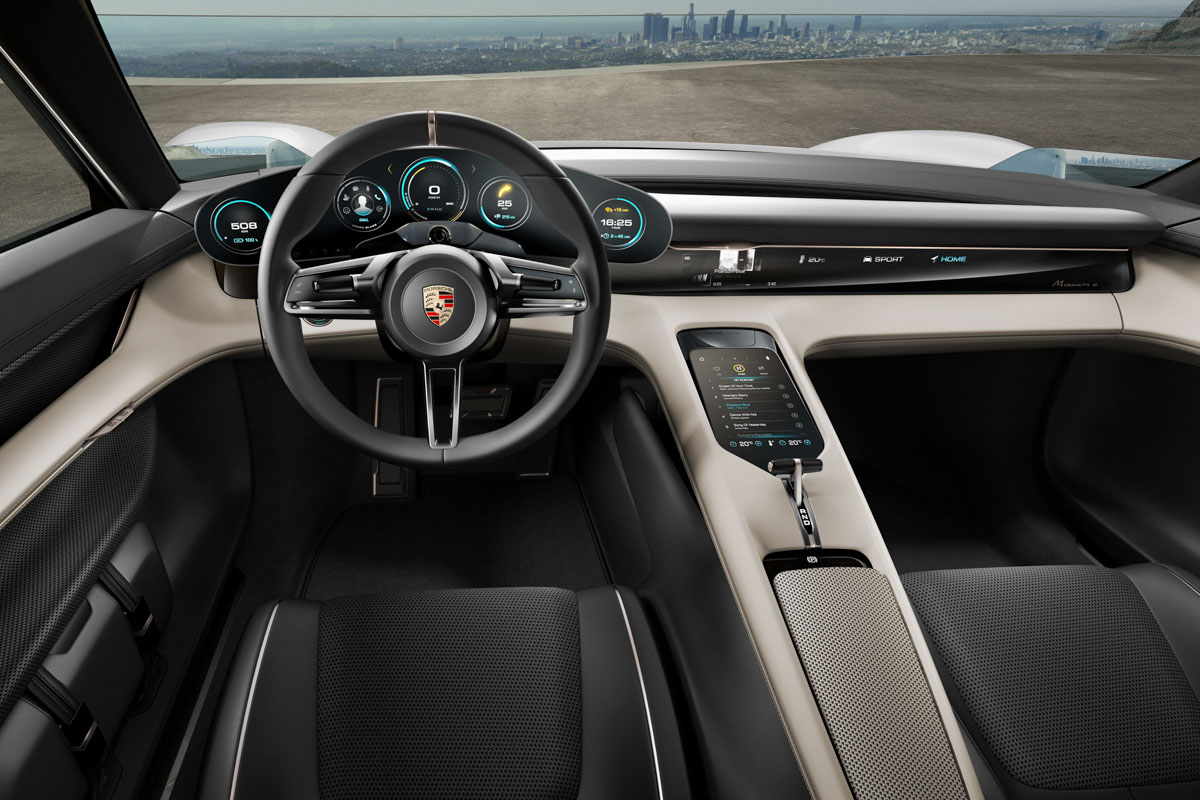 By putting the Taycan project into production, the German sports car maker is making a significant commitment to the technology – as well as investing $825m at Stuttgart-Zuffenhausen, and creating more than a thousand new jobs. Work on Porsche’s manufacturing facility will create a new paint shop, a new assembly plant, and changes to the engine factory to accommodate electric propulsion production.

It would be remiss not to note that Porsche’s announcement comes not long after parent company Volkswagen’s scandal over diesel emissions.

With VW already promising renewed focus on cleaner methods of propulsion, it seems logical that Porsche would follow suit – though media attention on American firm Tesla has also prompted several manufacturers to take a closer look at electric performance cars.

Importantly, though, Porsche seems determined not to lose its roots in the move toward electric power. ‘We are resolutely taking on the challenge of electric mobility,’ said Oliver Blume, chairman of the Porsche executive board. ‘Even with solely battery-powered sports cars, Porsche is remaining true to its philosophy and offering our customers the sportiest and technologically most sophisticated model in this market segment.’ Watch out, Tesla.
This article originally appeared at evo.co.uk
Copyright © evo UK, Dennis Publishing