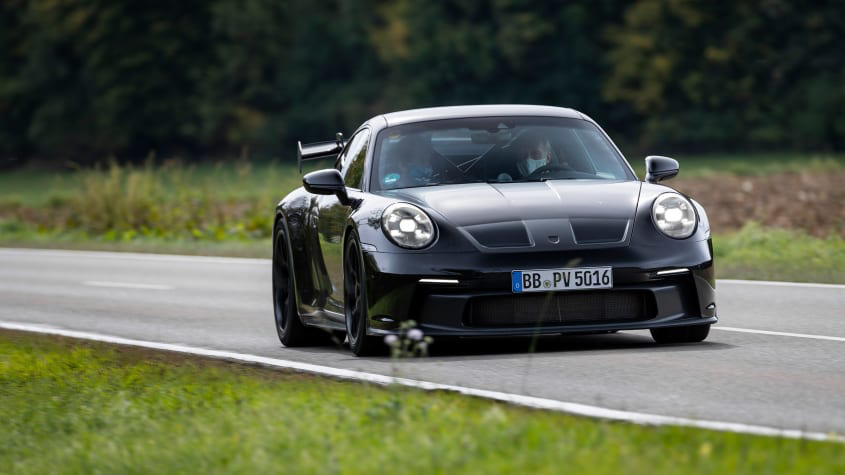 Porsche has revealed key tech details on the 992-generation 911 GT3, including official images of a close pre-production model with Porsche development legend Andreas Preuninger at the wheel.

While we’ll have to wait until early next year for a full rundown of the new GT3’s technical package, we now know about key elements, including the engine bolted to the other side of the rear axle and the use of the same 4-litre naturally aspirated flat-six derived from the unit found in the 911 Speedster.

In the Speedster, peak power was rated at 503bhp, 10bhp more than the 991.2 GT3, and although the exact figure for the 992 is yet to be confirmed, we suspect it should remain around that level. As in its Speedster derivative, the new GT3 will also have to make use of petrol particulate filters in the exhaust system, but it clearly won’t affect the engine’s top-end, with a 9000rpm redline visible on the prototype’s analogue rev-counter.

The other big news is that both manual and PDK transmissions will be offered, both featuring one-fewer ratios than in the equivalent Carrera S, with the manual being a six-speed unit, and the PDK models using the seven-speed ‘box from the previous generation 991. While the prototype in these images looks to feature the manual transmission, look closely and you’ll spot two paddles and only two pedals. This is explained by the fact that the GT3 PDK models retain a joystick-gear selector in place of the standard 911’s rocker switch – due in large part to Preuninger’s fondness of being able to use the shifter, as well as the paddles. The new GT3’s overall weight is said to be mostly unchanged from the 991.2 version, the car weighing in at just over 1400kg with the driver and a full tank of fuel on board.

Going deeper into the chassis hardware, Porsche has also confirmed that the new GT3 will be the first road-going 911 ever to be fitted with double-wishbone suspension, something that has allowed Porsche’s engineers to further fine-tune the geometry of the front wheels. Porsche has typically utilised more space-efficient MacPherson struts, but engineers have cleverly packaged the new upper wishbones in such a way as to not affect front luggage space. The brakes are also bigger than before, with the previous 380mm front steel discs swapped for 408mm units, while carbon ceramics remain an option. Wheels and tyres are a staggered 20- and 21-inch set as in the previous GT3 RS and current Carrera S.

The GT3’s aero has also been given a big upgrade with a new vented carbonfibre bonnet now standard fit, and a stacked rear wing with motorsport-derived swan-neck hinges, which keep the underside of the wing clean of supports, therefore increasing downforce without increasing drag. This is also the first time a ‘standard’ GT3 has been fitted with a multi-piece wing like that seen on the GT3 RS – all previous standard GT3’s have so far been differentiated by their composite one-piece wings.

Specific performance figures are still to be confirmed, but Preuninger insists that the new GT3 is substantially quicker around the Nordschleife, yet he’s also adamant that feel and driver confidence has remained the top priority in the new GT3’s development. With the Porsche GT division’s track record, it’s a claim that comes with plenty of evidence to back it up – and one we’ll be able to judge for certain when the new GT3 arrives next year.

Previous ArticleWhat’s the future of the performance car?
Next Article History of the Porsche 911 GT3 – driving the original 20 years on