Peugeot marks the Indy 500 this weekend by celebrating a centenary of its involvement in the race in the form of a new concept car – the Peugeot L500 R Hybrid.

This weekend sees the 100th running of the great race at Indianapolis Motor Speedway. A century ago, Dario Resta won the 1916 race in a Peugeot L45, one of three Peugeot wins between 1913 and 1919, and the L500 R Hybrid pays tribute to that with what Peugeot calls ‘a futuristic interpretation of the Indy spirit’.

With a wide track, a height of just one metre and a weight of just 1000kg, the L500 R Hybrid will hit 100kph in just 2.5 seconds thanks to a combination of electric motors and petrol engine. The latter pushes out 27bhp while an electric motor at each end helps deliver an overall output above 500bhp, with peak torque of 538lb ft.

The cockpit is designed to amplify driving sensations, with a small steering wheel and two holograms that show information in dual disc displays. Reference to the original two-seater L45 comes through a virtual co-pilot, experienced through a virtual reality headset for reasons we don’t quite understand. It’s also the same blue-black combination of colours as the 1916 winner. Sadly, it probably won’t pass modern Indycar homologation regulations.

*If you’re interested in seeing some more barely tenable racing concepts, you might want to check out THIS Gran Turismo Vision collection and these IndyCar concepts from Matus Prochaczka 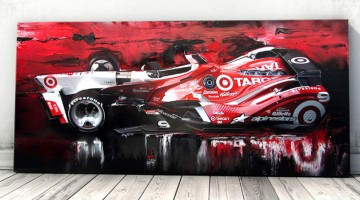