Stylish, content heavy and good enough to drive, the 308 is more interesting than a rival Golf, but then it’ll cost you Remember the medium-sized family hatchback? Once a centrepoint of the mainstream market, crossovers and the public’s general disinterest have left this once critical segment in a no man’s land between value-driven and premium. Some brands have doubled down, offering low-cost motoring for the masses that’s friendly but frill-free, while others have looked upwards in the creation of a premium product, even if the badge doesn’t suggest it. Peugeot is one such brand, positioning its new 308 as a premium product in the segment, something defined by design, technology and its price point.

One look at the new 308 in traffic and its first impressions are good, as atop a relatively mundane set of proportions is a highly detailed, ornate and yes, quite premium-looking hatchback – whatever that means. Designed under the supervision of former Peugeot designer Gilles Vidal, the 308’s detailing is an exercise in more is more, with fine brightwork, daytime running lighting structures and some very complex-looking lamp internals that make a Golf look like it’s undergone a German austerity programme. The effect is certainly arresting, and even if you can’t get over the new branding, there’s no doubt Peugeot is working hard on making the new 308 as desirable as a medium-sized family hatchback gets.

The same mentality has been applied inside the cabin, too, as while it’s not quite as dramatic as in the latest 208, it’s technology – rather than design – that defines the experience. As with all modern Peugeots, the driving position is defined by the small octagonal steering wheel that sits low with a digital driver’s display sitting higher beyond it. Many do find this a compromise, with the wheel often obscuring the display, but for this driver it’s just about fine. What’s less good is the dashboard itself, as the screen’s integration into the dash makes the rest of it sit quite high, looking almost like a cliff face of varying plastic textures that can make the cabin feel a little claustrophobic.

The central dash is dominated by two more digital displays, both touchscreen and both with their own advantages and disadvantages. The larger display is clear, high resolution and relatively simple to navigate, but suffers from a latency that makes it difficult to use effectively while driving. The smaller, narrow screen below (standard on most models) acts only as a shortcut tool for some of the car’s functions, and when fitted on high-spec models is a useful tool for accessing various features. There is one thing that’s clear with the 308’s cabin, though, and that is its material use, build quality and relative attention to detail make most, if not all rivals, feel totally outclassed. By comparison, the Golf once again feels cheap and from a UI perspective is a bit of a mess. Looking at premium rivals, an Audi A3 feels cheap and basic, the Mercedes A-class chintzy; only the BMW 1-series is a step up on the Peugeot.

However, Peugeot’s so far successful ambitions of being ‘premium’ start to lose their lustre when you actually start to drive the thing. The engine range is varied, made up of a 130bhp 1.2-litre turbocharged petrol, 129bhp 1.5-litre diesel and two 1.6-litre petrol plug-in hybrids with 178bhp and 222bhp. The turbo petrol is very refined, and despite having a tiny power output, the 308’s impressively lithe 1288kg kerb weight and a decent chunk of low-down torque make it just about keep up with traffic. All 308s, regardless of powertrain, feature an eight-speed torque-converter automatic, and while just about fine when mooching around at low speeds, can feel clunky and unresponsive unless you take control via the steering wheel-mounted paddles.

The hybrid is a complicated case. Under the bonnet is a larger 1.6-litre turbocharged four-cylinder engine producing either 148bhp or 177bhp, combined with an 81kW (109bhp) electric motor powered from a 12.4kWh battery pack. Total peak figures for each variant are 178bhp and 222bhp, the latter being the most potent of all 308s, reaching 100kph from rest in 7.5sec. Being a proper plug-in hybrid, rather than a parallel hybrid in the mould of the Corolla hybrid, Peugeot quotes an all-electric range of 60 kilometers when the batteries are fully topped up, although we saw a maximum of 45 kilometers in ideal weather conditions.

Where it’s becoming commonplace for manufacturers to be offering plug-in hybrid powertrains, the ability to make them drive naturally is the challenge, and it’s one that Peugeot hasn’t quite nailed with the 308. In all-electric mode the 308 is typically smooth and very refined, and when the petrol motor is called on there’s very little aurally to communicate that to you, but in terms of response from the throttle pedal, things start to go a little all over the place.

The drivetrain’s latency that’s present in all models is not hidden away within the hybrid’s complex arrangement, making the process of accelerating a jerky affair. You can’t really hear this indecision in the transmission, engine and electric motor, but you can certainly feel it, the engine often pulling all sorts of weird rev movements that appear to have nothing to do with your right foot. The process wouldn’t be so distracting if the car accelerated in a linear fashion, but it doesn’t, often giving you more or less performance than required, and often changing its mind in the process.

The brakes have a similar problem, as the calibration of the regenerative and friction braking is very poor, with the initial tip-in point of the brake pedal never being where you left it. It makes the car jump on the brakes with too much vigour, or more worryingly, without enough bite every time you hit the pedal. Even with one consistent pedal application from high speeds, the braking force changes constantly, and sometimes requires you to chase the pedal as you’re coming to a complete stop. It’s not reassuring at low speeds, and feels quite problematic when driving faster.

It’s also worth noting that while the base cars are impressively light, hybrids pack on an extra 300kg, making any semblance of agility disappear. When driving at speed, the chassis is merely fine. The steering is fast in ratio, but light in feel and can sometimes feel a little difficult to read when at high speeds, while the chassis has a safe understeer-led balance – as you would rightly expect. The suspension is certainly on the softer side, and even on the GT’s 18-inch wheels does ride very well, but comes with a compromise to outright body control. A Ford Focus or VW Golf finds a better balance between control and finesse.

But there is a ray of light in the new 308. It’s 20mm lower than the last model, and still has an inherently light chassis, but one that’s stiffer and more dimensionally stable than before. It all adds up to a strong base for what could be a brilliant new GTi. Yes, the plug-in hybrid PSE brand will be the only plausible high-performance 308 in Peugeot’s product plan, but if the previous 308 GTi by Peugeot Sport was anything to go by, a new generation with this car’s inherent chassis improvements paired to its brilliant design and interior could be a winner – if only Peugeot had the inclination to build it.

The final element of the Peugeot 308’s upmarket ambitions come clear when you look at the prices. Low-spec cars with the three-cylinder engines start at a reasonable $27,400, but dig into the hybrid models and you can specify your 308 GT Premium 225 Hybrid to up and over $43,000. Yes, there’s a lot of content involved, but that’s a huge sum to spend on any medium-sized French family hatchback.

Volkswagen’s Golf is priced at around the same points up and down the range, with the GTE equivalent to the top-spec hybrid GT Premium specification. The Golf is marginally less expensive at $41,990 (the GT Premium 225 starts at $42,800), and comes with an extra 20bhp, but it isn’t as well equipped. Ford doesn’t offer a PHEV Focus at this point, but its recent update does make it a strong rival at the lower end of the Peugeot’s range. Plug-in Audi A3s are about the same price model-for-model as the VW, making them cheaper than the Peugeots, and significantly so when purchased on a PCP on account of the Audi’s stronger resale values. 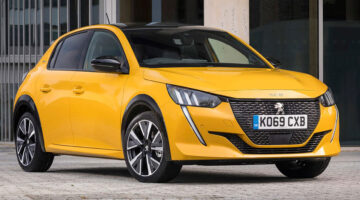