Our Long Drive Home. Ungut in Uzbekistan. UK to Australia

Our intrepid duo – Mike and Jess – are just a stone’s throw from the Kyrgyzstan border, having battled trucks and lorries on unmarked mountain roads, extreme heat, and swarms of travellers filling up in Tashkent. Oh, and severe gut rot in Uzbekistan.

Having made it to Uzbekistan, I woke up one morning at 4am with cold sweats. It felt like I’d been punched in the stomach but whoever had done it was holding on, and twisting. Barely able to breathe I keeled over into the foetal potion and let out a barely audible moan.

The night before I had decided we were in just the right place to make up for Jess’ desert camping and border control birthday, so we went for a nice meal next to the square pond in Bukara: very romantic. We ordered some local food: Pilaf (a nice rice dish), a soup, and a shish kebab, which we shared between us. We walked back to our oasis under the stars surrounded by beautifully lit mosques feeling rather content with ourselves.

At 9am the Finns – Mika, Tommy and Frank whom we’d met at the Uzbekistan border– and Jess were ready to hit Tashkent via the historical town of Samarkand. I, on the other hand, was fighting stomach cramps and a headache, caused no doubt from severe dehydration. That said, I was much more stable so with the help of Jess I packed my things into our bags and loaded the car.

Jess took the wheel for the entire journey to Samarkand (all four and a half hours) in the scorching 43° heat whilst I drank my body weight in water. Bent double as I was in the passenger seat, most of the trip was a blur: all I remember was driving past a little place called Ungut, which was oddly fitting.

Deciding that Tashkent might be a little too ambitious for us today (I was feeling useless and Jess could hardly drive another four hours), we agreed to find a place to stay in Samarkand. Fortunately, near the Amir Temor monument, we found a great little place called Emir’s B&B with a lovely little courtyard and more grapevines, this time hanging overhead (when I buy my own place I’d like it to have a courtyard). Not that I was in any condition to enjoy it, collapsing as I did into bed and falling asleep for what felt like a hundred years. 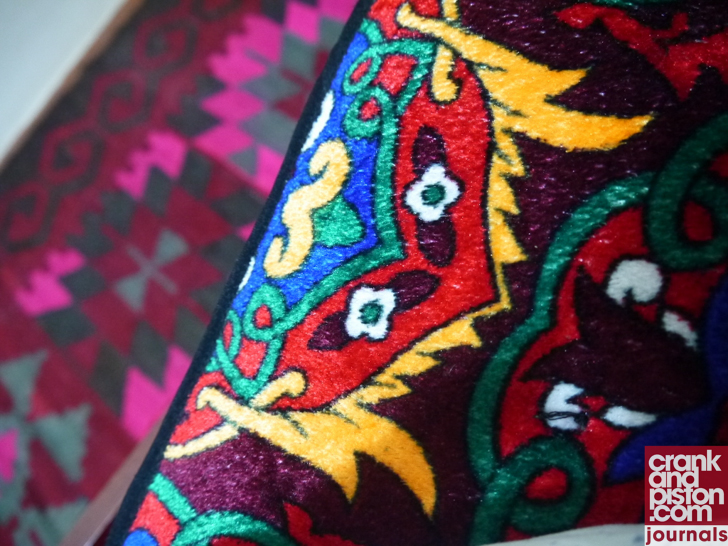 When I finally woke I found Jess had gone to get us some local bread and salty crisps to help increase my gut’s stability (have I mentioned how wonderful this chick is?). Feeling considerably better, we hit the road early wanting to make good time to Tashkent, where we had been told it was the only place we could get petrol easily.

How true that was. It might seem like an odd thing to get excited about, but finding petrol has been one of the biggest problems we’ve faced whilst in Uzbekistan. There are so many empty deserted service stations along the highways, with chains barring access and paint crumbling in the heat. Those that remain in action only provide gas for the local cars, which our British-registered Renault Clio was not. So you can imagine how bizarre it was then that as soon as we drove under the giant Soviet sign signalling entry into Tashkent that every petrol station was full with cars refilling on 95 octane. Talk about playing favourites with one city, but I guess it is the capital.

We filled up our cars and jerry cans and were soon on our merry way towards the Kyrgyzstan border. Rather bizarrely, almost from nowhere, we came across a mountain range, which proved entertaining. As we snaked our way up the hill without road markings, we were soon fighting for space, muscling lorries and trucks(!) out of the way for fear of being pitched off the road altogether. But we still had time to take in the views.

Uzbekistan has been a bit of a rollercoaster adventure, with lots of ups and downs. It has possibly been the most charming country we’ve visited yet, but certainly the toughest. As we settle down for the night in Qo’Qon, I’m ready to move on and see what Kyrgyzstan has in store for us.

Previous Article2013 Formula Drift. Justin Pawlak. Throwing Down in Monroe
Next Article The Weird Side of Motorsport