Can the limited edition Nissan Patrol ‘Desert Edition’ improve on an already stellar off-road platform? crankandpiston.com finds out in Liwa.

To my surprise, upon seeing the new Nissan Patrol ‘Desert Edition’ in the metal for the first time, I see no armour-plated weapon of destruction, but a seemingly standard vehicles parked in the sand with a tent attached to the rear.

This can’t possibly be it, can it? Surely the monster should have huge lift kits, a roll cage or, at the very least, a snorkel and a shovel mounted to the hood?

No. In fact, so subtle are the modifications, you’d be forgiven for not even noticing them. New skid plates are just about visible at the front and rear, a ‘Desert Edition’ badge – along with the signature of 16-time FIA Middle East Rally Champion Mohammed Bin Sulayem – is mounted over the fenders, and there’s customised suspension for higher ground clearance. There’s also a desert flag, a compressor for inflating two tyres simultaneously and a kinetic rope, and – just to add an air of intrigue – the first 50 customers receive a tent that can attach to the rear canopy. I was sold with the tent (forgive me), but possibly the most notable mods are the aggressive Beadlock tyres, which allow the Patrol to ascend high slip angles at low pressure without the tyres slipping off the rims. 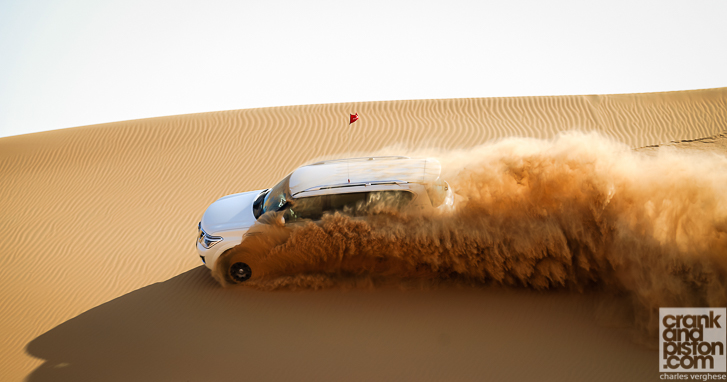 Indeed, the cabin is identical to a standard Patrol’s (barring the beige cloth seats) and it even packs the same 400bhp 5.6-litre supercharged V8. It does make me wonder then if Nissan has gone slightly barmy: how could this ‘modified’ vehicle improve the already stellar performance of one of the Middle East’s most popular and respected off-road vehicles?

Turns out I didn’t have to wait long for my answer. Indeed, we wasted little time diving into some of the hairiest landscape I’ve come across. Impressive enough as the base platform is, approach and departure angles in the Desert Edition top out at 34.1 and 25.9 degrees, respectively, making traversing even the sharpest angles seem like child’s play: well-established low-down torque from that V8, responsive shifts from the seven-speed gearbox, and a four-wheel drive system that arguably still tops the pops mean that running out of steam on the ascent is never an issue. Into the softest sand, those Beadlock wheels and re-tuned suspension – by Bin Sulayem’s team, no less – begin to make their mark. Even when our test route takes us down the wrong turn, and the lean we have on the dune seems impossible to recover from, there’s still not a peep from the mechanics. It’s all business, as is proven moments later when, having freed ourselves from certain death, we take some air over an unsighted hump, the suspension rattled far less than the driver. I’m stunned. Not only does the Patrol perform, but it is flogged and beaten with disregard, the only signs of our run are sand on the kick plates and some green faces in the cabin. 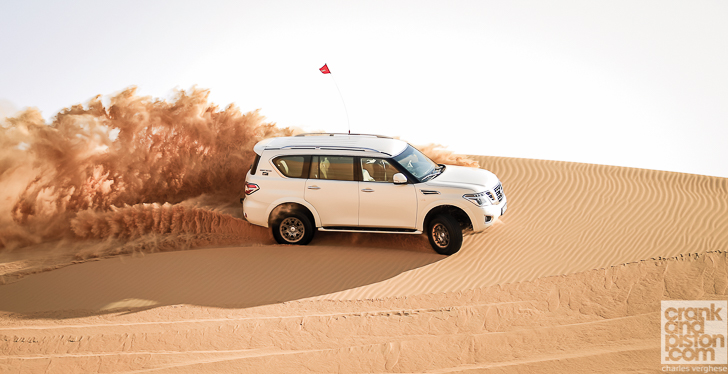 That the ‘Desert Edition’ is impressive then is beyond doubt. Of course the question remains: just how much of an improvement is it over the standard Patrol?

Ah, that’s where things get tricky. Some of the more, ahem, ‘courageous’ members of our group still manage to bury both axles in the softer sand, so the Desert Edition is not impervious to such things. A question mark remains on how civilised the newboy is in the real world, as our test didn’t take us on-road. Plus, a $69,400 asking price compared with the standard Nissan’s $64k is a little on the pricey side given the latter’s already superb off-road prowess. If such trivial matters are of little concern for you, then the Desert Edition must surely be at the top of your bucket list. But if they’re not, you may want to think twice before handing that deposit cheque over.