Last year, Nissan’s performance arm – NISMO – made its official debut in the Middle East. We take one of its regional creations – the 428bhp NISMO Patrol – for a spin.

When it comes to cars in the Middle East, the Nissan Patrol is an undisputed king of both the road and the dusty granular expanse alongside it. Comfortable and accommodating for day-to-day driving, the Patrol is also a beast off-road, unrivalled by anything of its size besides arguably the Toyota Land Cruiser. Subtle rather than radical updates every few years provide slightly more power and improved technology for increased consumer appeal without alienating existing customers. Japanese engineering and purpose-built for the region means the Patrol could also outlast erosion, handy for military and governmental contractors for whom breaking down in the middle of nowhere isn’t an option. With the Patrol alone, Nissan’s regional business has expanded four-fold since 2011 and is expected to grow a further 20 per cent within two years.

So when NISMO was officially launched in the Middle East last September – 31 years to the month NISsan Motorsport was founded, for some reason – that the division’s famous white and red detailing would appear on the Middle East’s prodigal dune basher was just a matter of time (as much was said by Nissan itself during the launch). The NISMO-ed GT-R we got under our belts quickly (you can check out our review HERE) but it’s the Patrol I’ve been keen to get my hands on. Has a renewed ‘commitment to making thrilling driving experiences’ compromised the all-terrain, everyday utility of Nissan’s flagship SUV?

So far so good in terms of looks anyway, one awkwardly mounted number plate on our test model aside. The Patrol’s existing aggression remains intact but is amplified by ‘race-inspired’ cosmetics, like a Zero-Lift bodykit, NISMO red accenting on the front bumper and door mirrors, plus some truly massive 22in RAYS forged alloys. Ironically the revised look inside is more tempered, diamond-stitch leather and polished veneer trim more refined than aggressive. Even the key fob arrives in a carbon fibre effect key holder, which, if I concentrate really hard, can convince myself is not horribly gaudy. 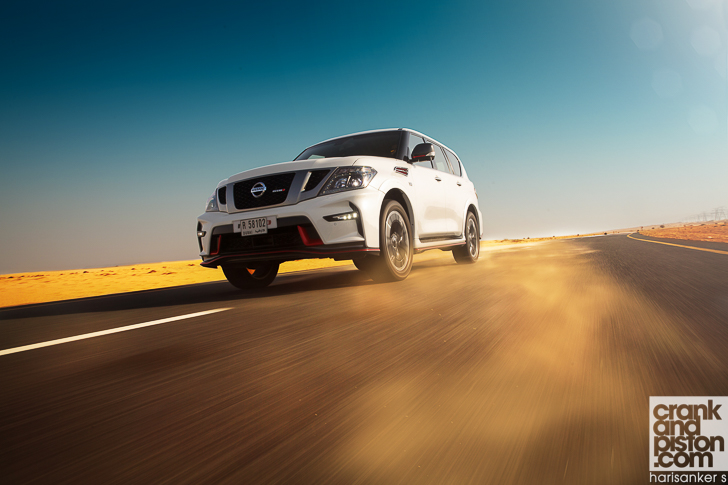 Alongside these cosmetic tweaks, NISMO engineers have included tuned suspension with heavy-duty Bilstein shock absorbers and ‘sport tuned’ power steering. The NISMO retains the outgoing 5.6-litre V8 rather than the downsized 4-litre unit that makes its debut this year. Said lump has still received a dig in the ribs, power jumping from 400bhp to 428bhp and torque receiving ‘an improvement over 70 per cent of the rev range’ (Nissan remains tight-lipped on exact figures though). Press the ‘go’ pedal, wait half-a-beat, and said V8 offers incisive grunt from deep in the low revs, the speed continuing to build progressively with uninterrupted strength thanks to smooth changes through an unmodified seven-speed automatic. There’s little flag in momentum before the V8 finally runs out of breath just above 5500rpm, but there lacks the scintillating burst of energy I’d expected from a NISMO. There may be an extra 28bhp on tap, but the thing still weighs 2750kg. How much difference is that really making?

It’s a similar story with those stiffened suspension arms. Fortunately the plush armchairs up-front mean ride quality is still excellent. When combined with incredible amounts of space front and rear and a beautifully put together cabin design, everyday utility mercifully remains intact. Saying that, the ride, though still pillowy soft, is finitely stiffer than its base model, which would be acceptable if the Patrol’s ‘enhanced handling characteristics’ and ‘unmatched agility’ were tangible behind the wheel. Which, quite honestly, they’re really not.

The steering still lacks any textured feedback to the front wheels despite that sport-tuned power steering (fortunately the weight at the helm is still low enough to comfortably manoeuvre the Patrol in town and traffic). Even customized body reinforcements and additional bracing have been fitted for quicker response, but there’s still considerable body roll under turn-in, despite the admittedly impressive grip from the tyres. There just isn’t the confidence to hustle a NISMO Patrol through the corners. It’s a similar situation with the brakes, which don’t scrub those linear bursts of speed as effectively as I hoped they would: punish the discs too much, and fade – and latterly understeer – is inevitable. Don’t get me wrong, we’d not expected a master class in cornering precision from the near-three-ton behemoth, but the NISMO’s agility versus that of a standard Patrol just isn’t strong enough. Especially when the NISMO’s starting price is some $15K higher than a top-spec $85,700 LE Platinum City Patrol. 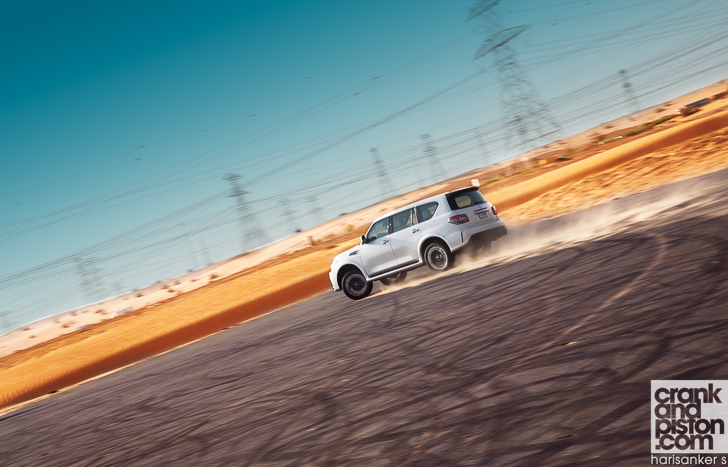 Much as Steve was with the Desert Edition last year, I’m left quite confused by the NISMO Patrol then following my time behind the wheel: aggressive to look at and surprisingly refined to travel in it may be, I’m struggling to understand the dynamic enhancements by NISMO – Nissan’s exclusive performance ROAD car brand – given the sheer mass each of them must work with. Compromise was surely inevitable, though fortunately the Patrol’s chuckable nature off-road has not been dampened, Nissan’s flagship SUV quite happy to plough through the sand like a locomotive thanks to that wide torque band. Again though, more so than a standard Patrol? We’ll need a head-to-head to figure that…

Will all this stop the NISMO Patrol walking out of the showrooms? Unlikely. The Patrol name alone is enough to tempt potential buyers in the Middle East, insight from Nissan’s motorsport arm the icing on an already intriguing cake. Even I have to agree that the NISMO treatment is a courageous attempt to give the legendary name yet more character. Just don’t raise your hopes too much when looking for something more substantial beneath those red and white badges. 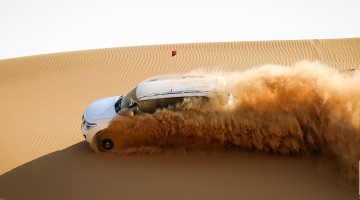