What happens when you can’t acquire an R32 Skyline? Well, you grab a Nissan A31, and build one…

As Jordan is one of those countries that legally doesn’t permit right-to-left hand drive converted cars (for reasons best left to the Jordanian government), it lacks the existence of legendary cars like the older R32 to R34 Nissan Skylines. And for JDM enthusiasts like myself, this is heart-breaking, especially for those of us who one day hope to own such a model. Every so often though – if you look hard enough in Amman – you find a JDM fan who shares the same dream but somehow managed to make it stick. A JDM fan like Mohammad Abu Odeh.

Mohammad owns a Nissan A31, aka the Altima, aka the Cefiro. It’s a rear-wheel drive four-door saloon, widely liked in the Japanese car culture given its similarities to the legendary R32 and the S13 Silvia (well, from a drivetrain and chassis basis at least). Hardly surprising that the A31 gained worldwide popularity, especially on the drifting scene. “Every guy’s dream around here is to have a Skyline,” Mohammad explained when crankandpiston.com caught up with him in the capital. “We can only see them on the internet, so unfortunately it’s not possible to actually own one.” Well, actually…

Having stumbled across a half-cut of an R32 Skyline found in the northern areas of Amman, Mohammed – impressed enough with the exterior – looked into the engine bay to find a bright, heavenly light shining back at him, namely a Nissan RB25DE Neo. Even more amazing was that Mohammad discovered that it fit his A31 perfectly, in addition to the body parts attached on that half cut.

And it was at this point that the decision was made: Mohammed would fulfil a dream and convert his A31 into – essentially – an R32. 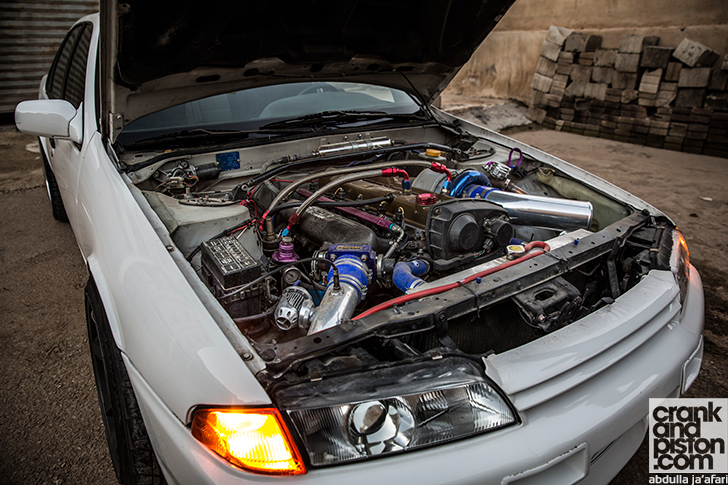 Understandably, a lot of time – and, for that matter, money – has been spent on the conversion. Though the swapped engine remained with stock internals (bolted to the original five-speed RB25 transmission and a Nismo clutch kit), a Holset HX40 turbo was installed with Walbro/Bosch 044 fuel pumps hooked up to a Jasma surge tank. On top of that went a custom intake manifold, a 90mm throttle body, and an AEM water-meth injection system. The ECU was replaced with a VEMS system and optimised by local tuner Abdulla Sukhoi, and after numerous tests at the NMK Dyno Centre, the A31/R32 now produces a very pleasing 400whp, with 487Nm of torque on 95 octane fuel (measured on a Mustang Dynamometer).

Mechanical matters done, the A31 then received some cosmetic surgery. The hood, bumper, and lights were no big issue, only the fenders needing significant work. Painted in solid white, and standing before us just a few weeks later, Mohammed still couldn’t quite believe how well everything had fit together. Indeed, one day he hopes to convert the rear as well, and create his very own R32 saloon.

“I did all I could to achieve my dream. I adore this car now. Even if it’s just a new front end and engine, it still looks much better than a stock Cefiro. You certainly won’t seen many of these driving around.” 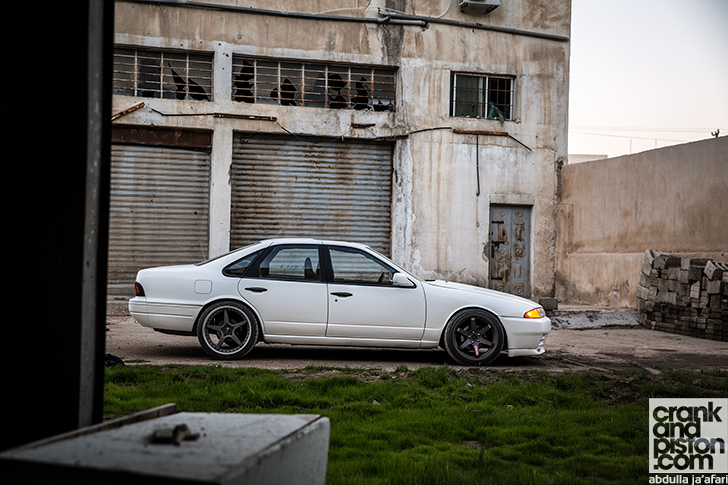 Brakes: The brakes from the R32 skyline