NISMO makes its official Middle East debut with a stunning GT-R tune. crankandpiston.com tries it out in anger on-track

This month Nissan Middle East had two surprises in-store for the region’s automotive media. The first was the official launch of its performance arm Nismo (NISsan MOtorsports) to the Middle East, some 31 years after its foundation in 1984. The second came shortly afterwards when it was announced two models would be arriving to the region soon, the brand new Nismo Patrol and the updated Nismo GT-R. And we were among the first to try the GT-R out, on-track.

The GTR is truly a dream car for me, and being one of those who turn into a kid when they see one, I was keen to see how Godzilla acted after upping the steroids, a model said to be ‘the most potent production vehicle in Nissan’s history’. 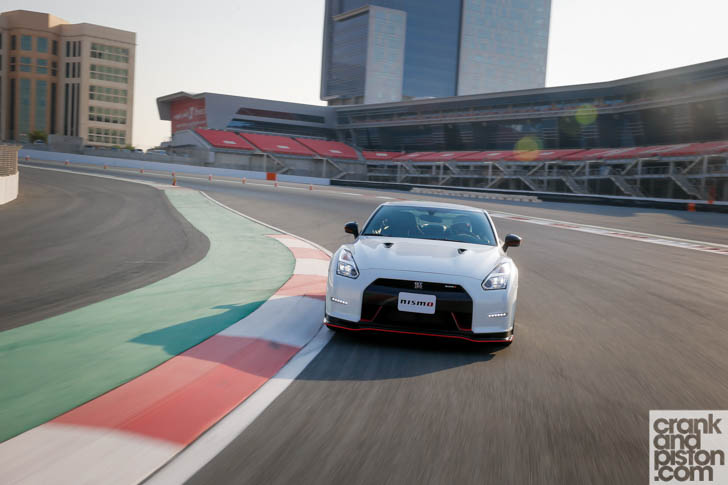 So what’s the difference between the Nismo and standard GT-R?

The fact that this new extreme iteration was inspired by the Nismo GT-R that competed at the 2012 Nürburgring 24 Hours should give you some idea how much motorsport influence has gone into the road-going model. There’s a brand new aerodynamic kit for starters, including carbon fibre bootlid and spoiler, front and rear bumpers, and lower front undercover. It may not look wildly dissimilar to the standard GT-R but the Nismo aerokit both lowers the centre of gravity and significantly increases the car’s downforce: at 298kph, the Nismo GT-R is capable of generating 200 pounds of downforce. And given that, at best, we’ll be touching 190kph on the Dubai Autodrome’s main start-finish straight, that should give you some idea how formidable the handling on this beast will be.

Under the bodywork, Nismo has fitted lighter-weight and extra stiff suspension components to further increase the GT-R’s rigidity. Light aluminium 20in wheels from RAYS help drop the overall kerb weight to 1762kg, the wheels themselves clad with Dunlops developed using Nismo-specific compound rubber for additional grip. The six-spoke design meanwhile is a nod to Nissan’s GT500 currently competing on the Super GT scene in Japan. Couple that with a race-inspired cabin – including Recaro bucket seats and Alcantara steering wheel – and Nissan’s drive to promote the ‘Race’ side of the GT-R is difficult to ignore. 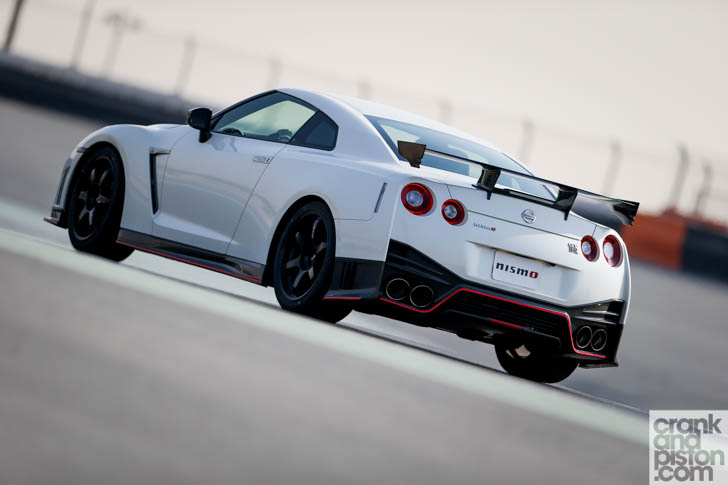 How does the new Nismo GT-R handle the corners?

Regrettably our time with the Nismo GT-R was limited to just two laps of the 2.46km Club Circuit layout of the Dubai Autodrome, so a more in-depth assessment will have to wait for now. Even with our all-too brief test drive though, the Nismo’s performance capabilities are more than clear. Under the bonnet lies essentially the same 3.8-litre V6 as the standard car, albeit with specially tuned high-flow, large diameter turbochargers plucked from Nissan/Nismo’s GT3 race car. Further tweaks, including plasma-sprayed bores for reduced friction and a factory-tuned exhaust system means performance figures jump from 545bhp and 463lb ft of torque to 600bhp and 481lb ft. Put simply, this thing can shift. PROPERLY shift. Sticking with a sequential six-speed automatic for the purposes of a broadened torque curve means fiery acceleration from standstill does not lag at any point before the redline, gear changes suitably aggressive and rapid to keep the V6 pulling hard. Interestingly the Brembo brake kit remains untouched, but given the formidable stopping power in the standard GT-R, it’s of little consequence, feel through the middle pedal and little signs of fade during our hot laps proof enough that the Brembos are still mighty.

The all-wheel drive setup ensures power is spread across the board for solid traction out of the corners, though the system is rear-biased: up to 100 percent of the torque can be thrown at the rear axle should you wish to grow a serious pair and attempt to get the back end out. Such is the power at work that this proves remarkably easy to do and manage, progressive feedback from the steering allowing me to keep the front wheels pinned to the apex. Just make sure you’ve had a decent cup of coffee first.

Perhaps the biggest surprise though are those Dunlop tyres. The GT-R has never been a car lacking grip and poise, but even so, the grip at the front is tenacious. Out of the Autodrome’s hard braking turn one as I feed the power in, there’s no sign of slip or trace of understeer as the GT-R continues to corner flat, that all-wheel drive system firing torque at the wheels under load. Similarly the rigid bodyshell ensures beautiful balance through the turns, and the ability – aided by the support offered from those Recaro seats – to push the Nismo harder through the high speed sweeping turns than a standard GT-R. 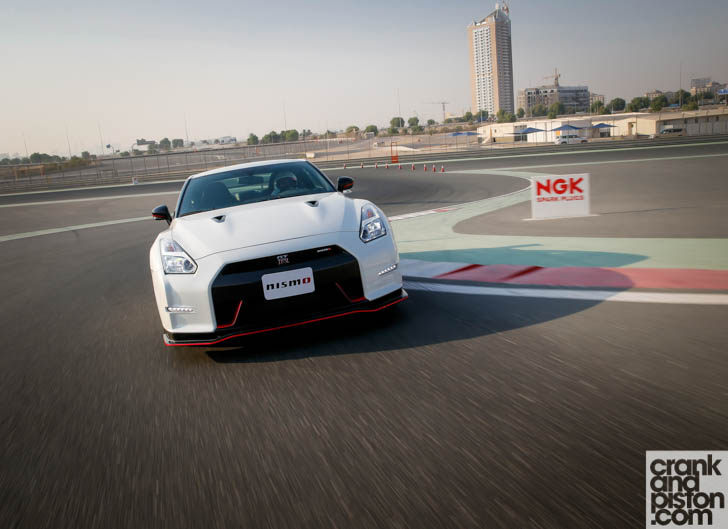 I make no secret that I am a big GT-R fan, and though we still have a while to wait for a slightly more thorough test, the first impressions are off the scale. The power at work is incredible, the grip and balance required to control it amazing, the handling is immense, and the looks are equally badass. You may still be one of countless people across the region keen to oversee your own GT-R tune, and we wish you well with that. But in terms of a factory-tune, we doubt you’ll beat Nismo’s package.