Skoda has released pre-reveal sketches of the new Octavia before its reveal later this year. The new model is a crucial car for the Czech brand, and promises to build on its virtues whilst adding a further layer of polish, sophistication and desirability.

These sketches portray the standard hatchback, although estate and sporty vRS models will follow soon after, the latter borrowing plenty of bits from the incoming next Volkswagen Golf GTI.

This new Octavia, like the next Golf, SEAT Leon and Audi A3, will be based on a heavily updated version of the MQB platform that has proliferated around the entire Volkswagen Group. The updates to the platform will largely be focused on further integration of electrified (but not full electric) powertrains and updates to interior tech.

Judging from these sketches, the new Octavia will lose its controversial split headlights in favour of slim LED units that will join a larger, wider grille. They also sit lower on the nose, highlighting the single-piece clamshell bonnet that is starting to define Skoda’s larger models.

The overall shape is more crisp and rakish than the current model’s, too, with sharper lines, a heavily raked rear screen and sharp lighting units, all core design trends currently being applied throughout Skoda’s expanding range.

Speculation is still swirling in regards to what will be found under the bonnet of the next Octavia vRS, but we expect it will hold on to its current 2-litre turbocharged four-cylinder engine, likely being split once again into two states of tune, this time in the regions of 240 and 270bhp – both being 30bhp gains on the current models’ figures.

Both six-speed manual and dual-clutch transmissions are likely to be offered, the latter controlled via a new push-button gear selector. The interior will likely see the biggest change, with a heavy emphasis on digitisation via larger touchscreen interfaces and a highset but largely minimalist dash layout.

The new Octavia will be officially revealed in the next couple of months, with prices and specifications not expected to deviate far from those of the current version, but we’ll need to wait till later in the year for more details. 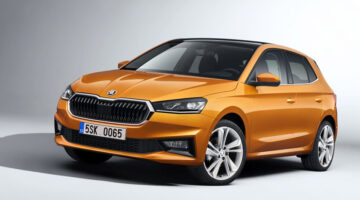