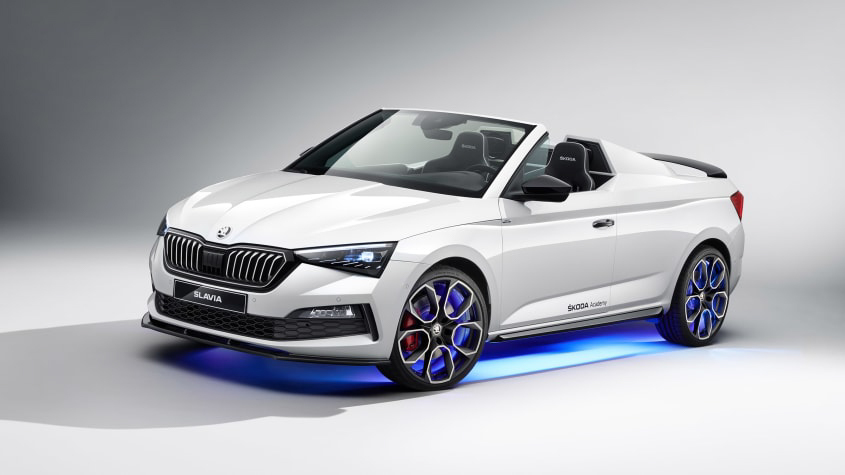 Skoda has revealed the Slavia Concept, a student-built one-off concept car that’s based on the Scala. Skoda reveals one of these concepts every year, with the car designed, engineered and built by Skoda’s vocational school students, overseen by their tutors.

This year, the students have taken inspiration from the Skoda 1100 OHC prototype revealed in 1957. The model was designed as a possible open-top two-seat racer for specialised use in endurance rallies such as the Mille Miglia. The low, open glassfibre body helped the racer keep its weight down to just 550kg. Powering that original prototype was a 1.1-litre four-cylinder engine with 91bhp.

The Slavia concept shares the notion of a two-seat open-top body (if little else), but does so rather convincingly, looking like a geometric take on a Renault Wind. While there’s no roof, the angular tonneau and impressively resolved integration of the short rear end, considering the Scala’s near wagon-like silhouette, is impressive to say the least.

In typical concept car fashion, the Scala rides on big wheels and tyres – in this case a set of 20-inch units from the Kodiaq vRS – with underbody and in-wheel lighting (that’s a new one), as well as illuminated badges front and rear. For maximum ‘effect’ (this is a car designed by teenagers, after all) the Slavia’s grille details, leading edge of the clamshell bonnet and main character line are also very subtly illuminated.

The rear also features a few bespoke elements, including a contrasting wing atop the also bespoke rear decklid offset by a unique dual-exhaust lower bumper. The interior is all Scala, with a few high-end finishes, bucket seats and the new Octavia’s two-spoke steering wheel to spice up the standard design.

The powertrain underneath the new skin is unchanged from that of a production Scala, utilising the 148bhp 1.5-litre four-cylinder turbocharged petrol engine that tops the range. It powers the front wheels via a seven-speed dual-clutch transmission. To make up for the reduction in structural rigidity, the students did add strengthening supports on the floor, as well as paying attention to detail finishes such as the welded rear doors, leading edge of the A-pillars and that new rear decklid.

While the likelihood of a Scala roadster is thin, to say the least, it does at least prove that the youth of today still know roadsters exist.