If your heart’s already set on a new Focus ST, Dreamscience’s tweaks offer a welcome improvement 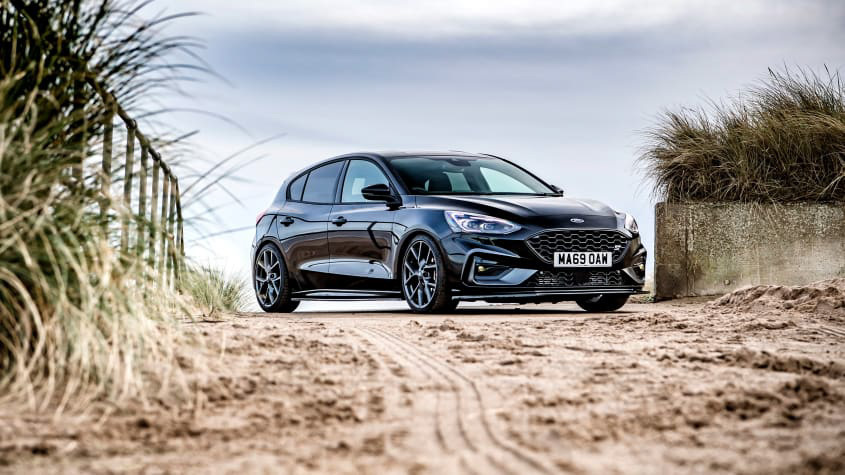 We struggled to gel with the previous-generation Ford Focus ST. There was undoubtedly a talented chassis – something you can typically rely on from Ford – lurking beneath the brash styling, but unlocking its full potential was a challenge because under power, the front wheels always had their own ideas.

Yet despite the considerable speed on offer in the new Focus ST I’m currently driving, the car is staying resolutely within its own lane. If the old car had offered this much power it’d probably have pulled the whole front end off.

It’s the work of Dreamscience Automotive, based in Hull. The firm was among the first companies in Europe to tackle the old five-cylinder Focus ST back in 2005, and has modified virtually every Ford performance model since.

In its unmapped state the latest Focus ST produces 276bhp and 310lb ft from its brawny, Focus RS-sourced 2.3-litre, good for a 0-100kph time of 5.7sec and a top speed of 250kph – perfectly competitive with the standard of this class. A six-speed manual transmission is standard, and power is sent to the front wheels alone.

Central to the Dreamscience package is a handset that allows you to dial this up to 330bhp and 385lb ft. No performance figures are quoted, but that’s a considerable increase for a relatively modest $600 outlay.

Switching to the full 330bhp map takes maybe five minutes. The electronic unit first stores the factory settings, before then applying its own ones and zeroes. You get a bit of a light show on the dashboard during the process, but it’s a small price to pay for the extra power and torque on offer, and you can always restore the car to factory settings before taking it for service or similar.

The standard ST just missed out on making the final four in our hot hatch megatest, so it’s interesting to consider how the changes might have affected that. For a start, the wide, ground-hugging stance seems appropriately matched to the first thing you notice about its road behaviour: rock-solid stability at speed. Combined with the fairly effortless power delivery on smaller throttle openings and the low NVH standard to this generation of Focus, it’s easy to stray up to quicker than intended speeds.

Something about the change in geometry from the lowering springs and wheel spacers has also improved the steering. In the standard car, there’s a strangely elastic feel to the rack either side of straight-ahead, but while the Dreamscience car still has strong self-centring, the actual feel is more natural.

On the way to our photography location I elect to keep the car in its unmapped state. I try a few pulls from different revs in different gears, and it’s undoubtedly an impressive engine even in standard form. There’s useful power at low revs, and while it’s not completely lag-free – stand on the throttle in the mid range and it takes a few heartbeats before surging forward – it’s muscular all the way from around 2000rpm to the red line.

It’s a mark of the quality of the Dreamscience map when you select it that at first, acceleration feels quite undramatic. There’s no sudden, unruly surge of power like you might expect from say, whacking up the boost by a few notches. Instead, power builds sooner and with greater intention, a proportional increase across the entire rev range.

It certainly shifts though. Like-for-like in Sport mode, the ST responds quicker to throttle inputs, pulls harder out of corners and charges down straights with more intent, accompanied by an induction snarl. A few deeply unscientific acceleration tests suggest various in-gear times have come down a notch, and flat out in the lower gears you can, like with the previous ST, take the traction control system by surprise – though with nothing like as much drama.

The wider track has taken some of the drama out of cornering too, with greater grip and less inclination for the rear to step out, but it’s still an engaging and adjustable chassis. In terms of both performance and handling, the work done by Dreamscience complements what is a fundamentally good hot hatchback from the factory.

The Dreamscience-mapped handset comes in at $600, while a new front-mounted intercooler ($600 plus $230 for fitting) and new air filter ($40) assist the electronic changes. This car also wears 30mm lowering springs and 17mm hub-centric spacers as part of the company’s handling pack, at $691.20, as well as $2005 of body styling changes.

The latter comprises the front splitter and sill extensions, gloss black fittings for the front grille, fog light surrounds and mirror caps and a gloss black roof (needless to say, all would be more apparent on a shade other than the black of the demo car) plus lightly tinted indicators and reversing lights, the yellow-tinted fog lights, and the decal set.

All in all you’re looking at $4160,10 of additions, with the ST itself currently starting at $40,212. Mid-thirties isn’t an insignificant sum (and given many buyers will opt for the higher-specced ST2 and ST3 models, the starting point will be even higher), and while the ST is a talented hatch, it still represents dubious value next to the Civic Type R and Hyundai i30 N Performance. Think of Dreamscience’s package less as an alternative to those cars though, and more as a way of enhancing a car you’re already set on buying, and it’s a useful improvement.