Petrol, diesel and plug-in hot hatches will once again join the Golf family, and could be better than ever 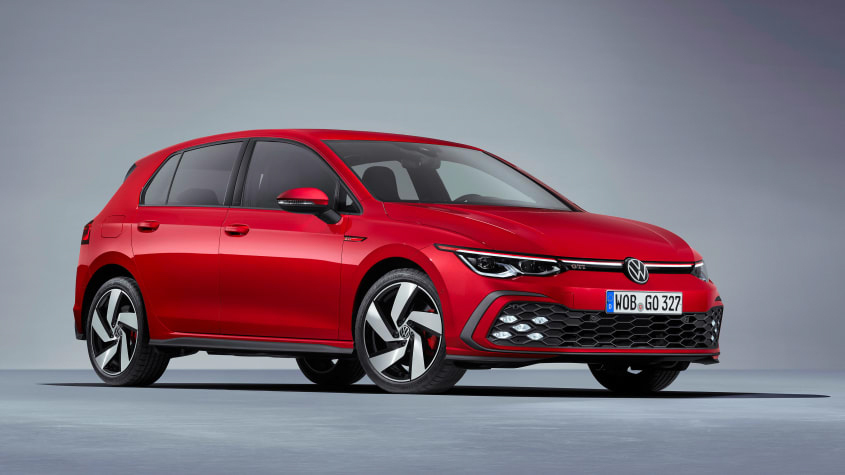 The launch of a new Volkswagen Golf GTI is a reassuring constant in the automotive universe. Around us everything might be changing, but the renewal of that sensibly styled hatchback with a punchy engine and a red stripe through the grille feels comfortingly familiar.

Now in its eighth generation, the Volkswagen Golf GTI features the latest in VW’s technological advancements, but remains pretty much the definition of a hot hatchback, right down to the continued availability of an engine unassisted by mild-hybrid technology, and a manual gearbox.

Of course, Volkswagen has already previewed the car that could take the GT brand into the next generation when it unveiled the second-generation plug-in hybrid Golf GTE last year, while for those prioritising low fuel costs and maximum distance on a tank, the diesel-fuelled Golf GTD returns too.

Notably, the GTI, GTD and GTE trio is more consistent than ever. Nowhere is this clearer than in their torque outputs, with all three models making around 273lb ft, albeit at different engine speeds. The GTD is also more potent than ever, putting 197bhp to the front tyres, while the GTE takes a step up in performance for this generation, making the same 242bhp peak output as the GTI.

Many of the GTI’s similarities though are with the old model, specifically the Performance version. The EA888 2-litre petrol engine remains, as does the standard fitment of a six-speed manual transmission (of a new design) and an optionally available seven-speed DSG. But now the Mk7 Performance car’s electronic limited-slip differential and larger brakes are standard fitment, and dynamically the new car should be another step ahead of the previous GTI Performance. The only performance-orientated option confirmed so far is an optional Akrapovič exhaust system.

The new GTD has a few more improvements, not least an engine Volkswagen dubs the EA288 Evo. Improved performance was one goal, with reduced emissions another – VW says it’s its cleanest diesel engine yet and produces its lowest NOx values, and post-Dieselgate, post-WLTP and Real Driving Emissions, the new unit should be a genuine step on.

What you don’t get is a manual gearbox, with the new GTD being seven-speed DSG only. That may disappoint some, but the GTD’s DSG take-up rate is even higher than that of the GTI, so the move makes sense.

The GTE, naturally, is also DSG-only, though it’s a six-speed unit here, matched to a 1.4-litre TSI petrol and hybrid drivetrain, that now benefits from a battery twice the size of the previous car’s unit. With 13.3kWh of capacity, the GTE should be good for 60-70km of electric-only running. Dynamically, Volkswagen says both GTD and GTE are just a notch behind the GTI, with its more focused Performance-style trimmings, but all three should be more involving than their predecessors.

At a glance the three models are visually similar, and also natural progressions from their previous generation. GTIs are denoted by a red stripe through the headlights and grille, with a tailpipe either side of the rear valance. The GTD gets a chrome stripe, and twin tailpipes on one side, while the GTE gets a blue stripe and no tailpipes. All three, as with the rest of the Mk8 Golf range, are now five-door only. Seventeen-inch alloy wheels are standard, with the GTI and GTD getting 18- and 19-inch options and the GTE only getting an optional 18-inch size. Standard tyres are Bridgestone Potenza S005s, measuring 225/40 for the optional 18-inch wheels and 235/35 for the 19s.

LED lights, meanwhile, are fitted across the trio, but there are some fancy optional lighting elements too. An I.Q. Lights package brings a unique design of front and rear lamp, as well as a full-width LED strip under each model’s signature stripe, while an optional fog light package can be inset into either side of the lower honeycomb grille. We suspect I.Q. Lights will be a widely optioned feature, given its distinctive look.

VW’s photographic display cars were all presented in typical colours – red for the GTI, grey for the GTD and white for the GTE – but one detail we nearly overlooked was that the red is an all-new shade, called Kings Red. It has the same tone as the traditional GTI red, but an appealing metallic effect should add extra pop in natural light.

Inside, the common theme continues. Large, supportive bucket seats are standard, with integrated headrests and tartan-style trim that reflects the red, grey and blue detailing from each car’s exterior. The DSG selectors are now a Porsche 992-style nub that looks a little lost in the centre console, but we expect the GTI will retain the traditional ‘golf ball’ dimpled knob.

The new Golf’s digital screens look sharp though, with touch-sensitive buttons on the steering wheel spokes to select various options on the driver’s display. Various configurations are available, one of which is a central tachometer. It’s all relentlessly logical, the driving position is typically good, and rear seat space and luggage volume are both more than respectable, so the Golf should remain as appealing as ever to use day-to-day, whichever variant you choose.

As for pricing, VW is yet to confirm the exact figures. What it will say is that prices shouldn’t move too significantly away from the current structure, where the equivalent Golf GTI Performance starts at $41,201 in five-door form. The current GTE is similar, at $41,048 (though we’d expect the new car to be priced more like the GTE Advance, at $43,355), while the outgoing GTD with a DSG ’box was $39,971. Call it around $43,000 for GTI and GTD then, and up to $45,000 for the GTE.

The VW Golf performance range won’t stop at these three models, of course. A source higher up Volkswagen has confirmed to evo that a Clubsport will be coming, with a sharper set-up and even a Nürburgring mode featuring settings for engine, dampers and similar calibrated by VW’s test drivers. A new Golf R is also on the way, so if you must have all four wheels driven, that’ll be the one to go for.