Our deputy editor finds he hasn’t quite got the speed of 1967 Rally Monte Carlo winner Rauno Aaltonen, but does approve of the car he’s using to ‘prove’ it, the new MINI John Cooper Works.

Turns out Rauno Aaltonen is quick. SERIOUSLY quick. And I say this having just spent the last 10 minutes trying – and failing – to hang onto the 1967 Rallye Monte Carlo winner’s tail around Circuit Mallorca. It’s tempting to be the bad workman and blame the tools, but it would be wildly unfair to do so since said tool is the new MINI John Cooper Works.

Regular readers may remember that last year we pitted a MINI Cooper S around the Dubai Kartdrome against a Sodi go-kart, and while the ‘go-kart feeling’ cliché has been thrown around more than a badly-worn tennis ball, still there were grains of truth: agile and nippy, few cars on sale today have quite the same sense of fun and connection as a MINI. And today, the new JCW is no different.

Changes are as you would expect for a new generation, with tweaks to the bodywork to make the JCW more aerodynamic (including a larger front apron and rear spoiler), revised suspension for improved handling, and a 231bhp 2-litre TwinPower Turbo four-cylinder, the most powerful engine ever fitted to a production MINI. With this comes 236lb ft of torque, a 246kph top speed, and a 6.1sec 0-100kph time, if you opt for the six-speed Steptronic automatic that is. Lacking in grunt this sprightly minx certainly is not. 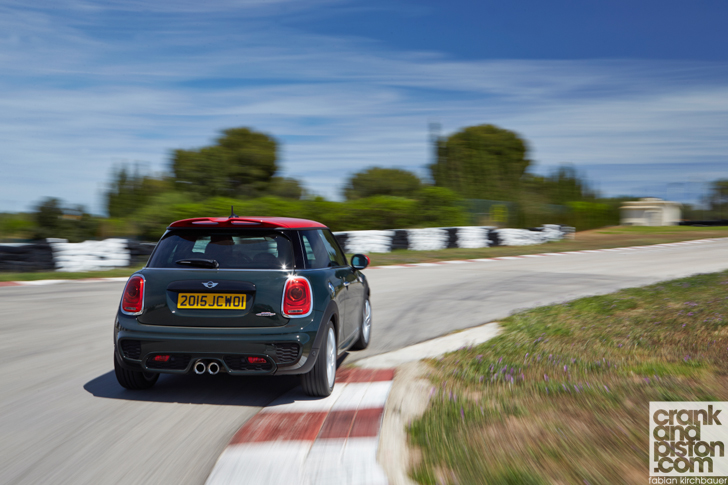 And yet still I’m struggling to pull together a clean lap around the Mallorcan track, my main issue being the high-speed, sweeping right-hander at turns two and three that leads onto the back straight. I just can’t carry the momentum in the same way that Rauno (now a sprightly 77 years old) can in the same machine, he hitting the apex and scrubbing barely any speed while I counter-steer almost hilariously after getting my turn in wrong time and time again.

“The secret is to lift completely off the throttle, then get back on it,” the amiable Rauno mentions in pitch perfect Finnish English during a break between sessions. “Not like this,” at which point he gestures a slow release of the throttle with his hands, “but completely. When you do this, the car balances itself and gives you a better line through the apex. If you push too hard too early, you’ll wash wide and not go forwards.” Wise words from our track expert here today.

Still my position is frustrating, not least because – not to be overly boastful – I’m nailing the tight infield section beautifully, due in no small part to the JCW itself. The balance of the new MINI for instance is just remarkable, maintaining a composure through the tighter corners even at ambitious turn-in speeds thanks to a low centre of gravity and clever weight distribution. It’s the nimble nature of the JCW that truly impresses though, with little in the way of weight-transfer affecting the poise under load or acceleration. All power may still be fed through the front wheels, but grip at the rear is beyond ridiculous: even with all stability systems turned off, and as Rauno mentions, “it will not spin, never spin.” Try it. You won’t be able to. 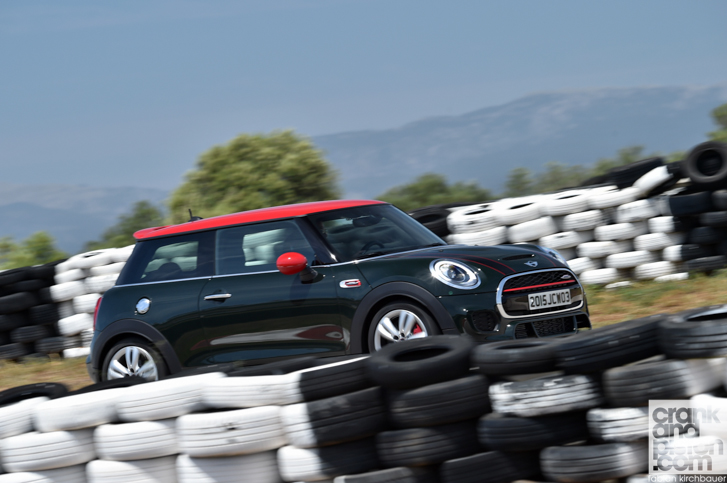 Back behind the wheel. I ask my Mr Monte Carlo winner for some more pointers, of which he’s more than happy to oblige. Smoothness through the tighter turns is the key he says, since jumping on the power too early will unsettle the front end as 231bhp is launched in one big lump towards the front axle, ultimately leading to a slower laptime. And if, he continues, I find I need more than a 180-degree lock on the steering wheel, I’m either over-driving or have got my corner entry VERY wrong (a mark which, fortunately, I don’t overstep). With that, Rauno points at the traction control switch – or the ‘fun button’ as he terms it – tells me to turn everything off, and jumps into the JCW that will lead me at speed around the Mallorca circuit once again.

I sense that for my benefit he’s taking the opening few corners a little easier than he could, but Rauno is still romping away through the high-speed turns two and three as once again I lift off too little and leap on the power too ferociously, the car sluicing sideways towards the kerbing.

On the back straight though the grunt from those four-cylinders is very aggressive, a blip of extra juice around the mid-range mark as BMW’s TwinPower system kicks in, encouraging me to push well into the high revs. Changes through the short-shift six-speed manual gearbox allow me to keep the momentum up, a tangible punch from the engine as the revs once again rise above mid-range. I’ve opted against the automatic option for our run on-track, but do get a chance with the automatic box later in the day on the road, changes – once again, as expected – wonderfully crisp. 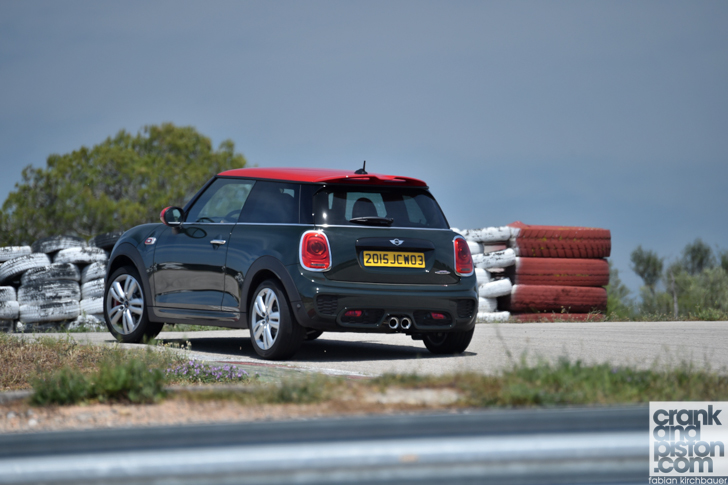 Into the infield, the Servotronic power steering takes control. I’ve long since abandoned Normal mode for Sport, there being a noticeable difference in heft from lock-to-lock over the slightly woolly Normal mode from which feedback was rather weak. It’s making me work much harder but the connection to the front 17in wheels is far better, the grip they produce keeping understeer at arms length. It’s this point-and-shoot mannerism of the MINI that is making my run at Mallorca, though at times frustrating, so much fun. Nauseating as the ‘go-kart’ cliché might be, it does ring true…

Now through the infield – a fast-paced collection of left-right-left switchbacks – and onto the final run before the start-finish straight, the vented discs brakes are proving seriously impressive when the anchors are thrown out in full (and offer a good amount of travel in the pedal out in the real world), the nose jinking only slightly as I downshift into the final chicane. Bouncing over the kerbing both right and left, the JCW once again maintains its composure onto the main straight as the lap is completed. With Rauno still ahead, though now at slightly higher pace, we head towards turns two and three, and my Achilles heel. 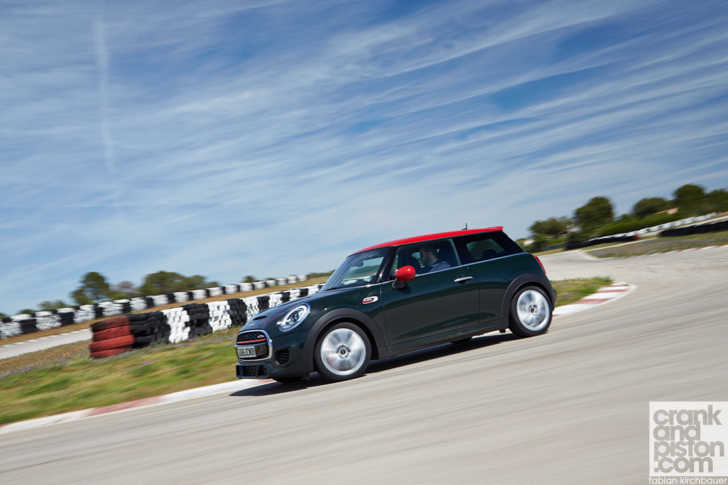 Entry speed through one is good, and I manage to cut the apex more cleanly than I have done hitherto. Heading into turn two, I place the MINI as wide as I dare, full commitment and a good line into the high-speed turn three my goal, plus lift-off as instructed. Here we go…

It’s an improvement but the car is still sluicing sideways with the camber, Rauno again opening up the gap. Off the throttle the JCW has balanced itself beautifully but I’m still jumping on the throttle too aggressively, said action loading up the front end, lift off livening up the rear axle, and quick inputs at the wheel trying to keep the car going straight. From behind, this must look only barely controlled as the rear end dances back and forth, but once again, there’s no trace of the rear wheels letting go, nor indeed the front end losing grip. I’ve much more confidence in this seat than I would have in other, more powerful models, in which I’d likely be facing the other way by now. Or find myself in the gravel. It’s this sense of agility and nippiness that allows me to push harder than I probably otherwise would. And again, while the run may be frustrating, I’m enjoying it immensely, the kick from that turbo hypnotic, the handling superb and the poise through the turns remarkable.

Turns two and three may still take some practice. Time for another lap Rauno?