crankandpiston.com puts Mercedes-AMG’s revised A45 4MATIC to the test on-track at the Eurospeedway in Germany

It’s really quite astonishing how much power can be pushed from a 2-litre engine. The facelifted Mercedes-AMG A 45 for instance puts out 26bhp more than its predecessor, whose turbocharged four-cylinder produced a hardly underwhelming 355bhp to start with. It’s not just a few more horses they’ve added though. Torque has also been lifted to 350lb ft from 332lb ft, meaning the ‘new’ A 45 can go from 0-100kph in an impressive 4.2 seconds – half a second faster than its predecessor – which puts it almost on par with the BMW M3.

And then there’s the looks. A more pronounced nose, new tail lamps, a new spoiler lip under the front splitter and an AMG lip on the roof spoiler may not read like much, but the design really does look awesome, giving the model an even more distinct look over its segment rivals. Beneath the surface also lies a revised front axle differential for improved traction. Meanwhile the dampening of the MacPherson suspension has also been rejigged. There’s also the option of an AMG Dynamic Plus package – included on our test model today – to further aid handling.

Like I say, there’s more than additional horsepower to consider on the new A 45, which I’ll be putting to the test around the EuroSpeedway in Germany. 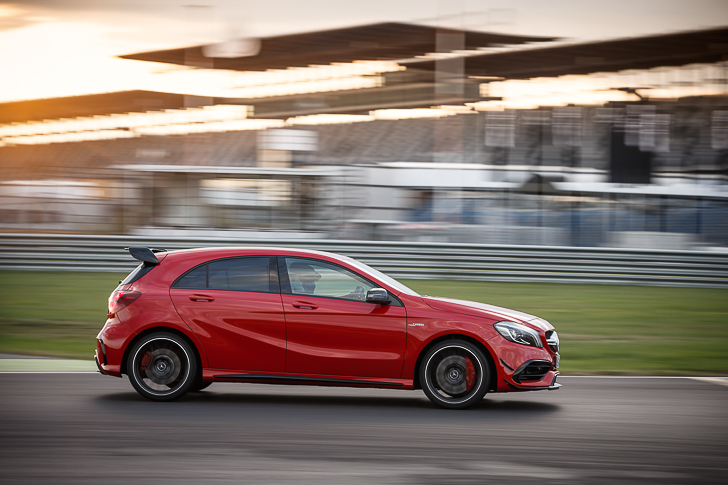 That’s the context taken care of. Let’s get to the initial impressions…

Upon getting into the car, the seats are well shaped with good supportive bolsters, but that’s about the only thing I’m a fan of in terms of the interior. I personally dislike the amount of carbon-fibre-esque veneer that’s been used, and the user interface looks like an afterthought: it’s been fixed, rather than integrated, into the dashboard’s design giving the feel of an aftermarket add-on. Not what you’d expect from a $58K hot hatch. Fortunately, the way this thing drives more than overshadows that.

Since our time on-track is limited, I’ve left everything in ‘Sport+’ mode, which offers shorter gear ratios and more responsive acceleration (they’ll be a more comprehensive test when the car arrives in the Middle East early next year). The updated model uses the same AMG seven-speed Speedshift double-clutch transmission as its predecessor, which proves similarly at ease with the added power. Somehow though, 381bhp is not delivered through all four wheels in an overly abrupt manner. It’s aggressive, certainly – a baby the A-Class might be, but this is still an AMG – but not overly lairy in its pick-up, inputs through the throttle pedal proving more linear than we might expect from a turbocharged four-cylinder. Fortunately, good feel through brakes – 350mm at the front, 330mm at the rear – gives me the confidence to lean on this additional power into and out of the corners without spearing offline. 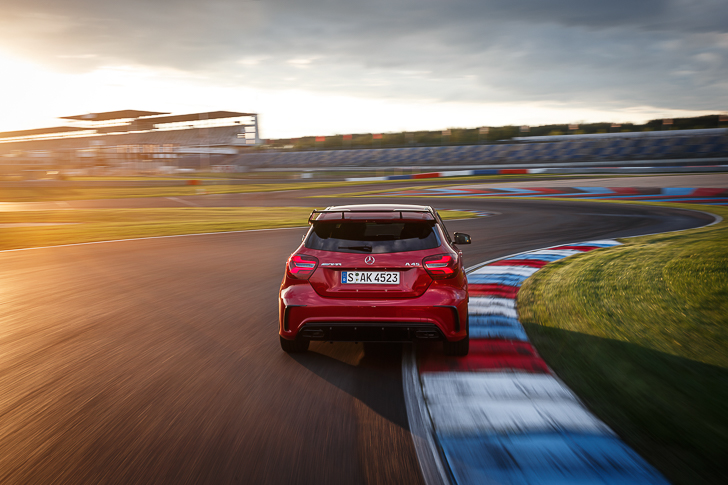 So it accelerates strongly. How does it handle?

Kudos should also go to the balance, there little trace of understeer, and when it does happen, it’s easily manageable. AMG’s slightly vague power steering system has thrown us in the past with both the C 63 AMG and the AMG GT, but a more compact package means that in the A 45, it’s less grating. Added bonus, not only was the Mercedes a joy to drive, the performance exhaust system with auto exhaust flap also makes for a fantastic sound on the move.

Safe to say then that the ‘new’ A45 can handle itself well. It didn’t feel particularly unstable at any point, gear changes are smooth and responsive, and solid braking means putting that additional power down on the straights can be done without hesitation. Of course the real question is, should you buy one?

Hmm, perhaps. The A 45 is no doubt impressive and provides that indicative AMG character we love but, as we found out last year, it’s difficult to look at the slightly overpriced A 45 AMG without considering other rivals in the segment. The Volkswagen Golf R, for instance, springs to mind…