crankandpiston.com welcomes a newboy to the long term playing field, the Mercedes-Benz GL 500

Last month we welcomed a prominent German manufacturer back to The Management Fleet, and even though opting for one of the company’s sportier saloons was tempting for a long term test, we put our grown-up trousers on and requested a prominent member of its SUV family. It’s a model line admittedly a few years old now but one certainly no less popular in the Middle East, and a vehicle that would prove perfect for day-to-day commuter traffic and hauling crankandpiston’s digital crew from shoot-to-shoot.

And this month, we’ve gone and done it again.

Our latest addition however hails from Stuttgart, and unlike the mid-range Audi Q5 we welcomed last month – the latest update of which you can read HERE – our brand new 2014 Mercedes-Benz GL 500 stands atop the three-pointed pyramid. The largest of the company’s SUV line-up, the GL is a whacking 16ft long, stands 6ft tall and measures 6.5ft across. Carting camera equipment around we doubt will prove much of a problem. Parallel parking on the other hand… 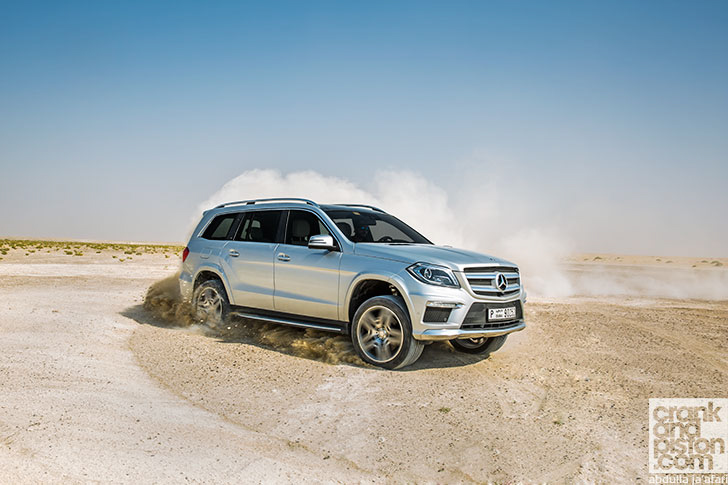 Admittedly the current generation GL may look a little showy for some (okay, most) people. I’m not one for big SUVs as you may know, and I can only imagine what effects my driving ego will receive when piloting around that enormous front grille, twin-spoke 19-inch alloys and a large dash of chrome detailing. It is a handsome devil though, even if these good looks are as subtle as an open-handed slap to a papercut.

On the inside we find Merc’s typically tech-heavy smorgasbord, including cruise control, Collision Prevention, a drowsiness detector, Pre-Safe Braking (which in the event of impending rear-end collision prompts the driver via warning beeps to take action), Steer Control, and numerous other systems designed to make driving a piece of strudel There’s enough head and legroom to host a five-a-side football match across the third row seating, enough Artico leather to re-plaster several herds of cattle, and enough buttons on Mercedes’ established infotaiment system to keep us swearing at the SatNav for at least a few weeks.

The trump card though lies beneath the bonnet, courtesy of a 4.7-litre V8 that produces 429bhp and 516lb ft of torque. A 2445kg kerb weight makes standing quarter mile times irrelevant but the rumble that escapes the exhaust pipes is pretty frisky. We plan on making the most of it too, since good noise insulation in the cabin makes said rumble difficult to hear when on the move.

Though similar in principal to Ingolstadt’s offering to the plate, there is still a sizeable difference between the Q5 and our new GL 500 (and I’m not just talking about the girth). Should be interesting to see how our two German SUVs enjoy sharing a stable, and which one ultimately proves to be the (practical) weapon of choice for the crankandpiston.com photography unit.