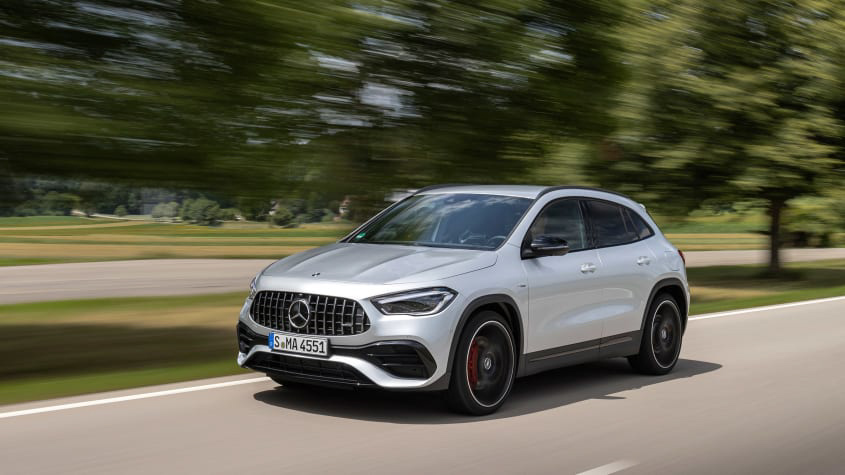 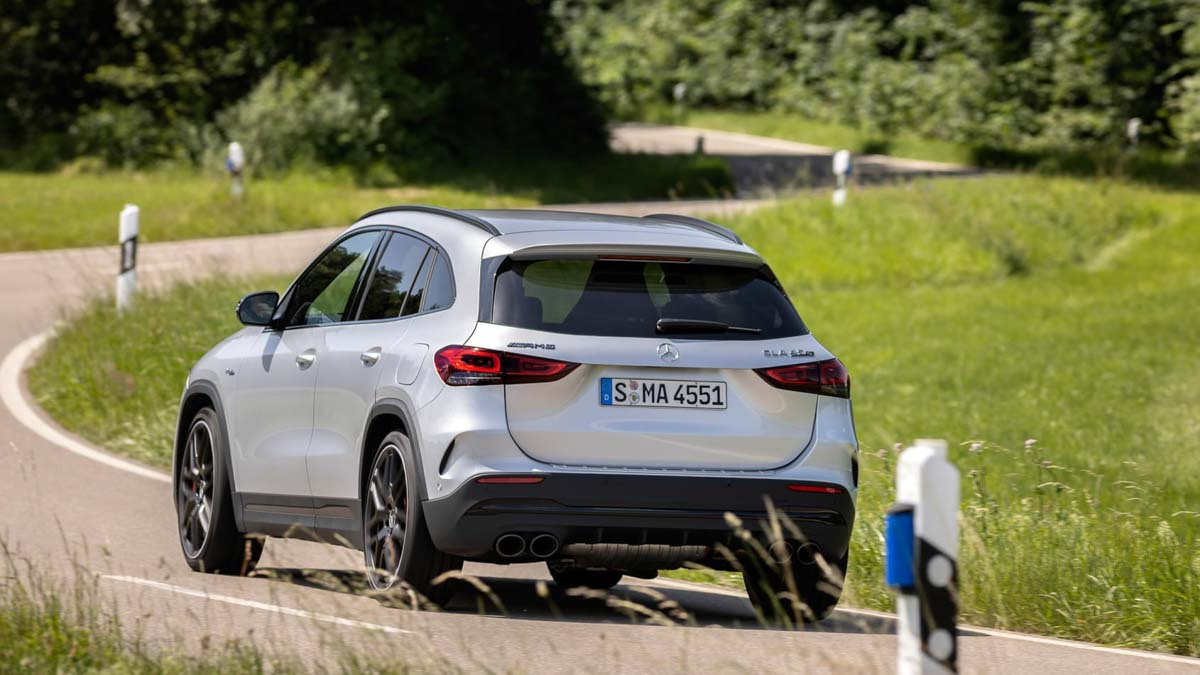 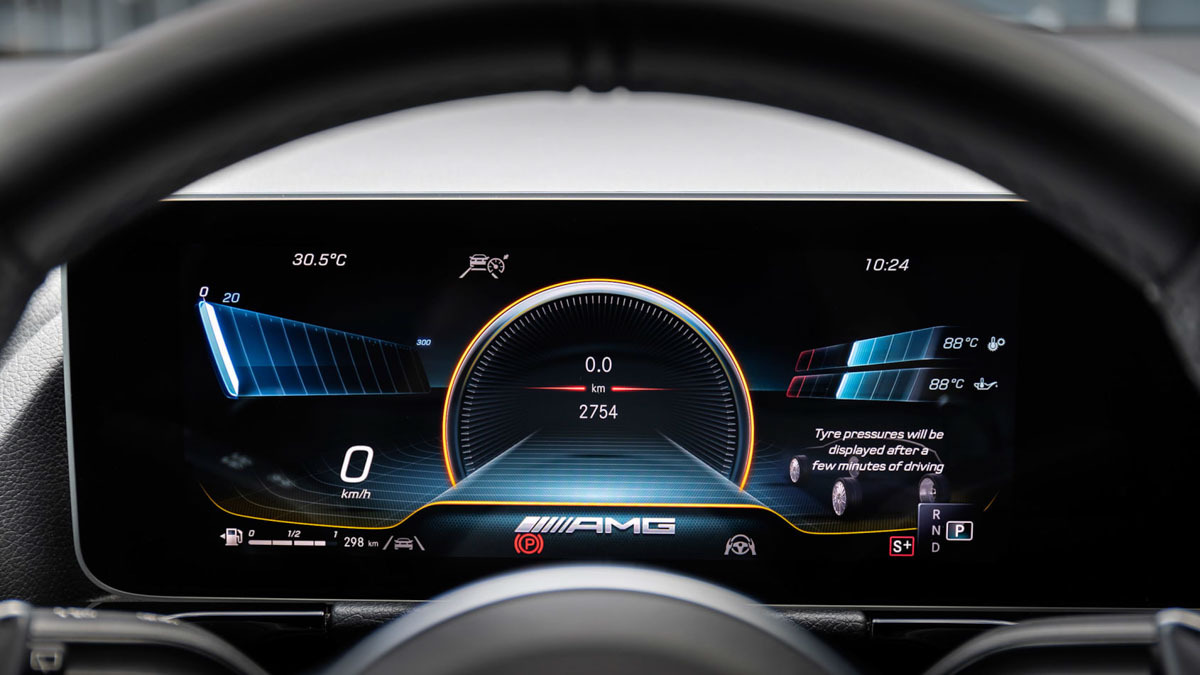 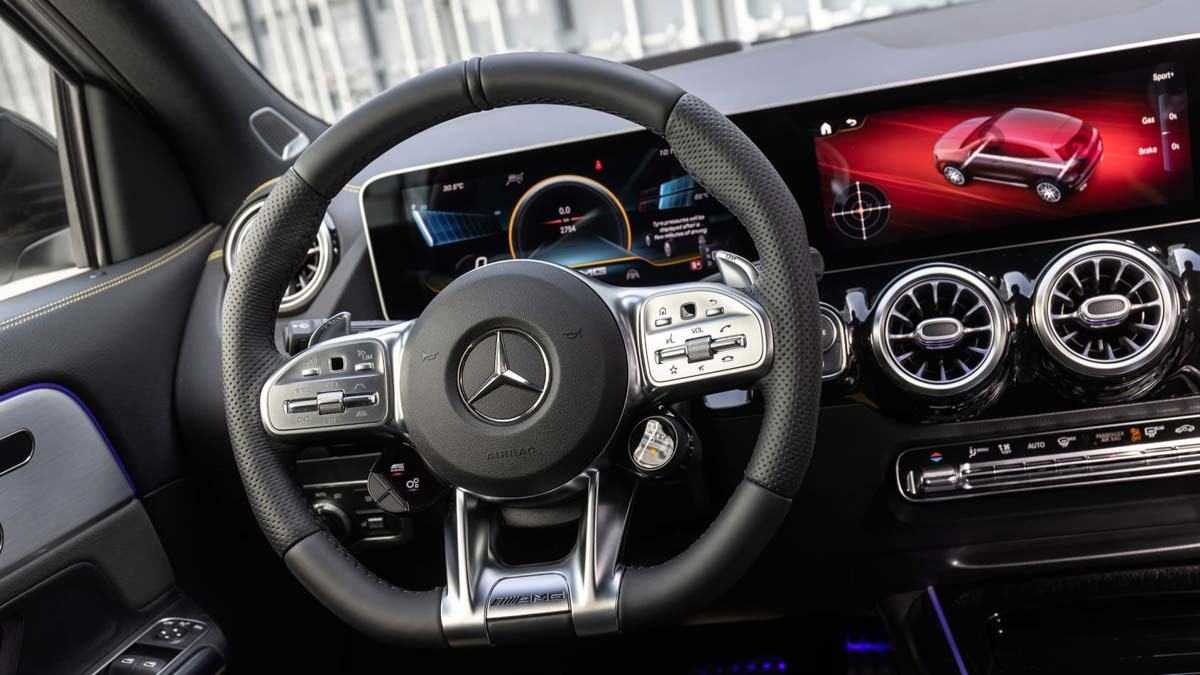 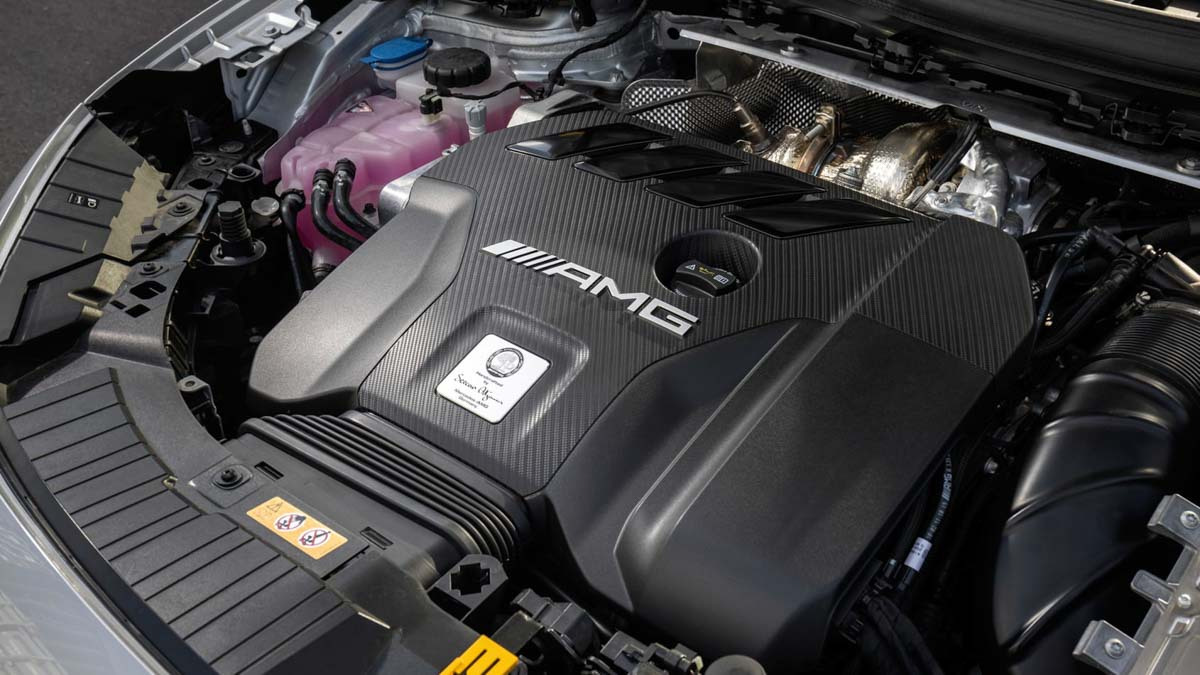 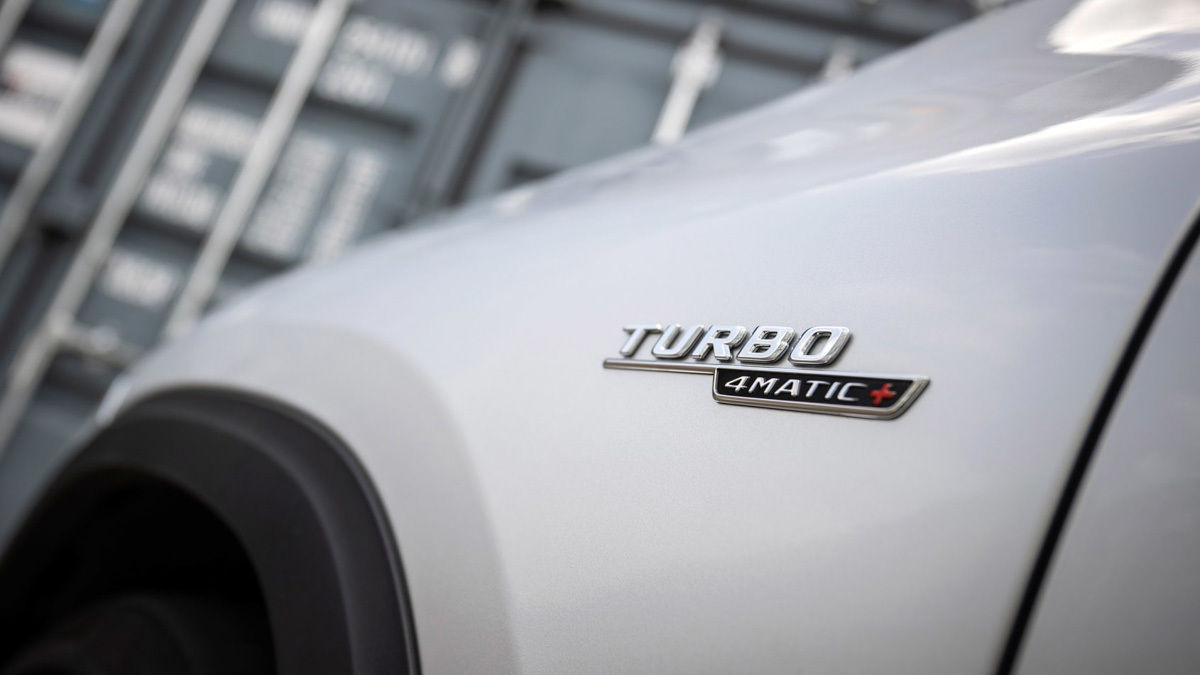 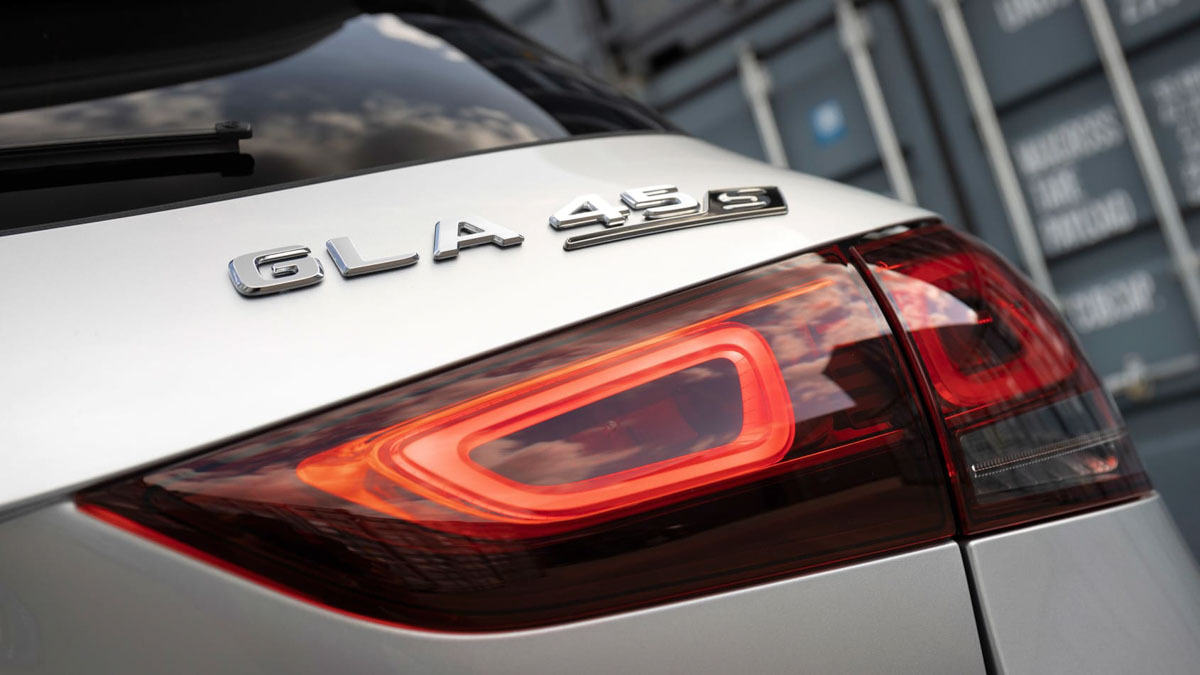 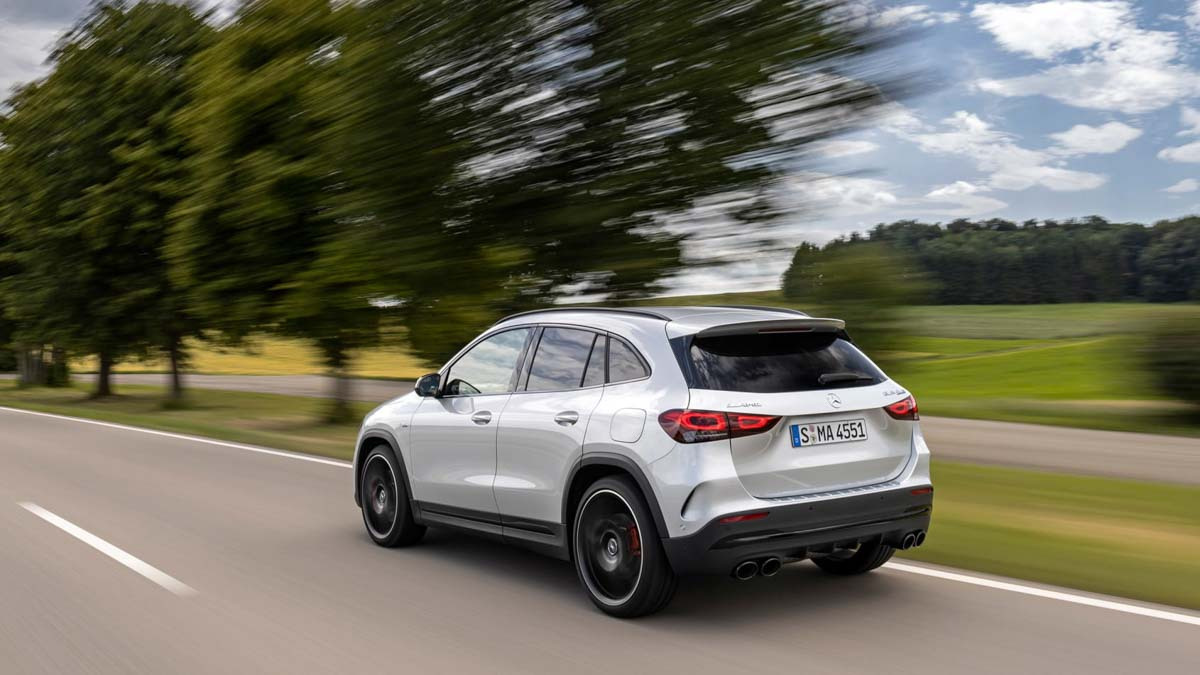 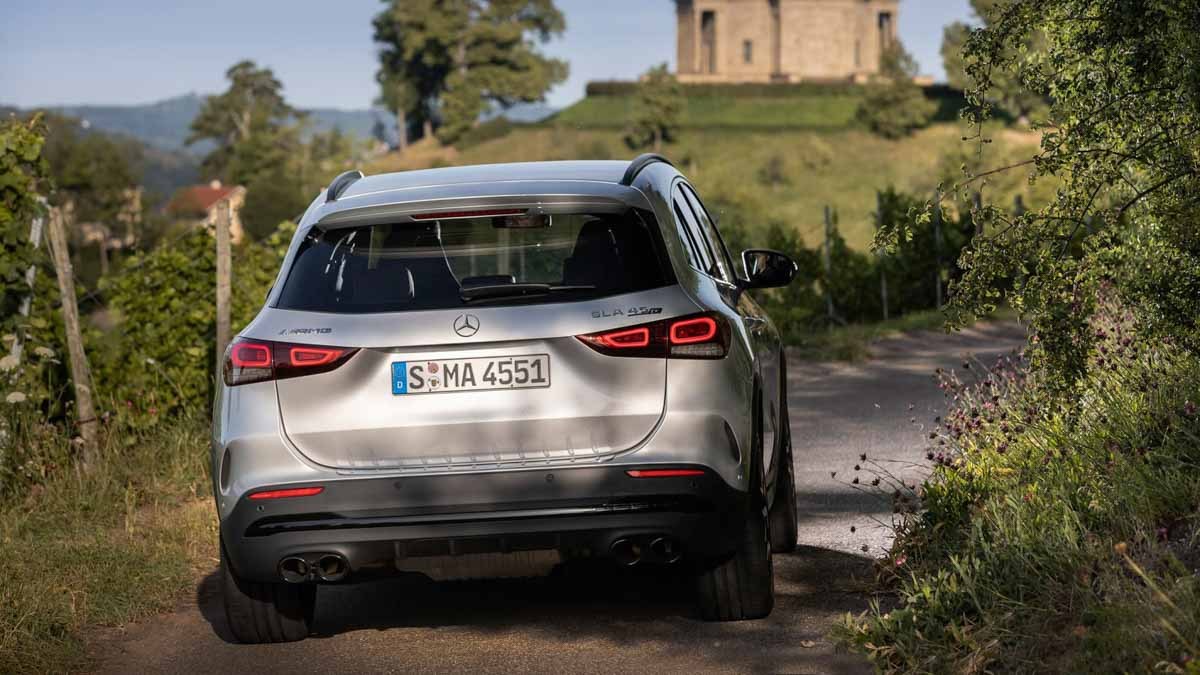 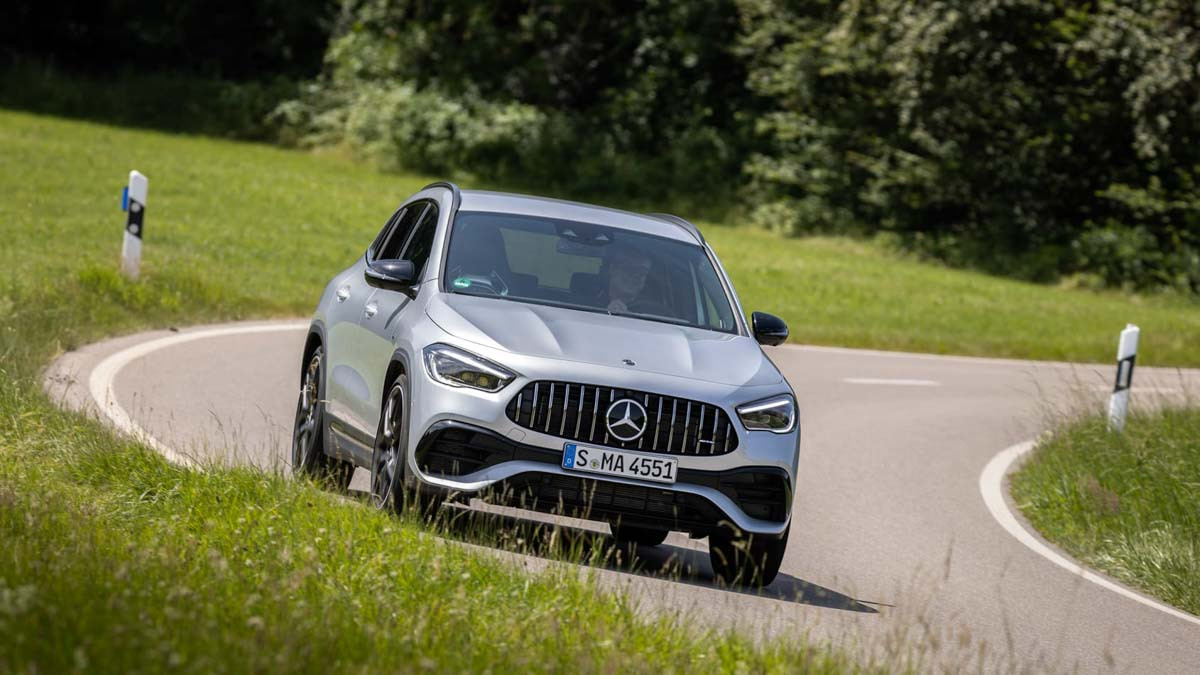 The old Mercedes-AMG GLA45 was, against the odds, more engaging than the A45 hatchback that spawned it. Nearly as fast as an E63 around the Bedford Autodrome too when we drove it back in 2015, but the most important thing was that, despite a poor ride and so-so gearbox, it was more fun than the A45 hatch.

It’s hard to imagine that situation this time around, given the A45 is one of our favourite superhatches currently on sale. It’s pretty enjoyable as a four-door coupe and a five-door shooting brake too as it turns out, so the tall and slightly gawky GLA45 S will have to work a lot harder to match its stablemates for fun factor this time around. Even if it’s nearly as good though, it still has the potential to become one of our favourite SUVs.

AMG’s 2-litre, 415bhp turbocharged four-cylinder makes another appearance here, the maximum output delivered at 6750rpm and 369lb ft of torque produced from 5000 to 5250rpm, though naturally there’s plenty on tap across most of the rev range too.

As with the A45 and its ilk, an eight-speed dual-clutch automatic remains standard fitment, as does an AMG 4Matic+ all-wheel-drive system with a pair of multi-plate clutches at the rear axle to divert power to whichever side it’s most useful.

While a 1690kg kerb weight is fairly hefty for a car that’s effectively Golf-sized (albeit taller), it’s actually 15kg lighter than the AMG CLA45 S Shooting Brake we tested recently, so in this class making a car long is apparently a little worse for its figure than making it tall.

Either way there’s not much of a performance penalty – a 0-100kph time of 4.3sec is only three-tenths off that of the CLA Shooting Brake, and four-tenths behind the A45 S hatch’s time. Top speed is electronically limited to 270kph.

Mechanically the GLA45 S is much like the other 45s. Suspension is by MacPherson struts at the front and a multi-link set-up at the rear, featuring AMG-specific springs and dampers, bearings, and subframe mountings. Damping is adjustable through the AMG Dynamic Select driver mode set-up through Comfort, Sport and Sport+ settings, each of which can be selected independently of the overall drive mode. A Race mode is included on the S, relaxing electronic controls and feeding even more power to the rear wheels.

Steering is variable-ratio and electrically assisted, and AMG has uprated the brakes to take account of the 415bhp output. They’re chunky six-piston calipers and 360mm discs up front, and single-piston, 330mm rears, though the brakes are still dwarfed by the optional 21-inch alloy wheels (20-inch wheels are standard).

A raised seating position is one of the oft-touted benefits of crossovers such as the GLA, and it’s the first sign that something is a little different if you’re familiar with the A45 in any way. While the bewinged bucket seats are identical, the GLA45 allows you to step across into them rather than flopping down over their bolsters, and sites you in front of an uncanny valley representation of the A45’s dashboard.

The excellent three-spoke wheel with its rotary control for the driving modes is the same, as is the MBUX infotainment display, the vents, and the simple centre console. But everything has been stretched upwards and the dash itself seems deeper and less pared-back – most obvious from the large and slightly distracting slab of silvery plastic in front of the passenger.

The view out is definitely slightly better, and rear-seat occupants will probably welcome their extra legroom, not from length but from a little extra depth. Despite the widespread use of black plastic it feels brighter than the A45 inside as a result, though the high driving position isn’t quite as racy as the more low-slung one in the 45s and once again in a small Merc, the cabin isn’t entirely free of rattles.

You’d be doing well if you could determine any real differences on the move though. The drivetrain is as much a megaton blast of energy in the GLA as it is in As and CLAs, and once you’ve experienced it at its best in Sport+ mode (which delivers sharper responses for the engine and gearbox, and maximum volume from the exhaust) you’ll be hard-pressed not to use it for at least a couple of minutes on every journey. If anything, the taller vantage point heightens the sense of speed – you don’t feel more vulnerable as such, but certainly less cocooned from the scenery rushing by the windows.

In corners the GLA seems largely unperturbed by its height. Clearly, if you were to line it up against the hatch on a circuit, or on a particularly challenging road, then differences would begin to emerge, but a large proportion of the A45’s capabilities have made it across (and upwards) into the GLA45.

If anything, the sheer grip is even more impressive here than in the hatch. The GLA’s not tall enough that it really has to fight physics so the ability is still there, and there’s something mind-bending about the speed it will navigate roundabouts and countryside wiggles. It seems to dig into corners like a downhill skier, and while all 45s remain firmly suspended, they also let you separate damping from driving modes, so there’s enough give to handle the worst surfaces.

Body control is still excellent in Comfort mode anyway, with only a touch more roll, and you quickly discover that like its counterparts the GLA45’s rear differential is only too happy to add a few extra degrees of rotation to your line on the exit of corners. If it feels good in the hatchback, it’s really quite amusing in a crossover.

Most importantly, the other 45s’ driver involvement is still present and correct, so if you need what the GLA offers over its more conventional hatchback, saloon and estate equivalents, you won’t have to suffer too much compromise in the areas that matter to evo.

Pricing hasn’t been confirmed for the GLA45 S at the time of writing, but it’s safe to expect a figure just shy of the CLA45 S Shooting Brake, based on the price of regular GLAs and CLA Shooting Brakes. Bank on the GLA coming in around the high-fifties, with one or two options pushing it into the sixties.

That’s still not cheap, but the parity with the CLA at least gives buyers some choice. The new GLA’s 435-litre boot is actually smaller than the 505-litres of the CLA Shooting Brake (though larger than the 370-litre hatch), but does benefit from a more practical opening, and the aforementioned extra rear-seat legroom and improved headroom will be preferable for some.

Surprisingly, 400-horsepower crossovers aren’t particularly common, though at the GLA’s price point you could do far worse than to add the $78,330 Porsche Macan GTS to your shopping list, and Audi’s five-cylinder RSQ3 Sportback, at $71,620, is also appealing if not as sharp or engaging.