McLaren’s most ‘aggressive racing concept’ yet – the P1 GTR – makes it debut in the United Arab Emirates. crankandpiston.com popped along for an ogle.

Anybody with a spare $3.2m littering their bank account but without a McLaren P1 in their garage can only look at these images with deep longing and envy (much like the rest of us). If however you do own McLaren’s eminent 903bhp hypercar and are one of the lucky 30-35 customers to receive a phone call from Woking, you might want to pay attention.

The new P1 GTR – revealed last night in Dubai – is the highlight of a new package being offered by McLaren until the end of 2016. New owners of the track-focused supercar will be invited to attend 12 racing events across the year (three of which are likely to take place at Yas Marina in Abu Dhabi, the Bahrain International Circuit and Silverstone in the UK) to put the newly modified GTR to the test. Fittingly, in tribute to the legendary F1 GTR – that of 1995 Le Mans winning fame – the new track weapon boasts a livery inspired by its forebear’s racing colours. 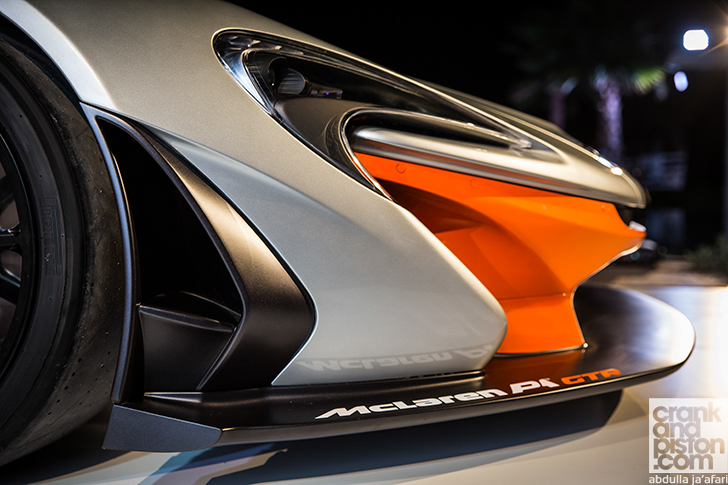 Fully built, run and maintained by McLaren Special Operations and tested by McLaren’s Chris Goodwin, the new P1 GTR boasts 1000Nm (737lb ft of torque) and 986bhp, 789bhp of which comes from the 3.8-litre twin-turbo V8 engine itself while the remaining 197bhp comes courtesy of the electric motor. Significant changes have also been made on the outside to improve downforce by 10 percent over the road-going model. The front track for instance has increased by 80mm for greater aerodynamicism, itself significantly improved by the new GT-like front splitter. Though the carbon ceramic brakes themselves have not been replaced – since they are ‘too good’ – nor the hydraulics, the suspension has been stiffened for track use, bringing with it a fixed ride height. Lightweight 19-inch alloys wheels shod with Pirelli rubber now make the grade, as does a motorsport-inspired air jack.

Cycle round to the rear and a brand new centrally mounted exhaust – exclusive to the P1 GTR – made from titanium alloy has been fixed, though the Formula 1-inspired Drag Reduction System and ERS ‘push-to-pass’ button are perhaps the biggest headline grabbers. Interestingly, such is the stiffness of the MonoCell chassis that a rollcage is not required. A 2008 F1-style steering wheel has also been added, a fitting tribute to the team’s last F1 driver’s title with Lewis Hamilton. Each new owner even gets their seat individually moulded. 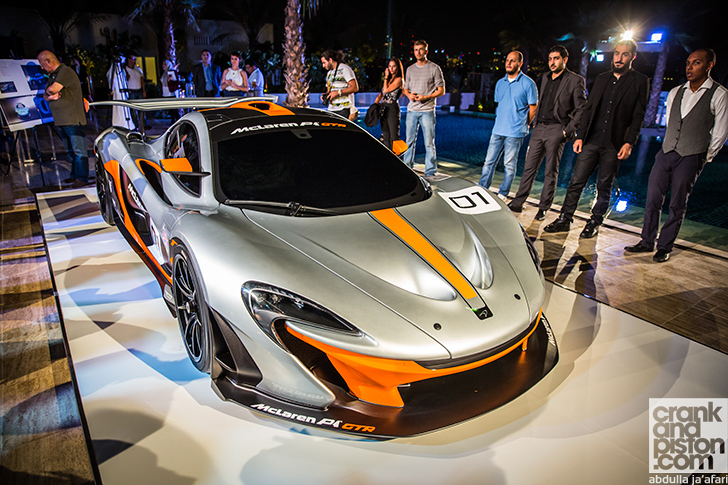 Of course, simply jumping in and going hell for screaming leather isn’t part of the deal. With P1 GTR ownership comes a new driver’s package, described as ‘the most exclusive club in the world’. Each new owner is required to spend at least six days in the race simulator at Woking ahead of his or her debut runs. The same system is used by McLaren’s F1 drivers and is accurate to within a hundred of a second to real track racing. Times in the simulator are subsequently compared to times set on-track for the full motorsport experience.

Those of you currently on McLaren’s customer database then might want to wait by the phone. The rest of us will just continue looking at the above images, weeping softly…