Jaguar has released full details of its new XE mid-sized saloon, one day before the model’s debut at the Paris Motor Show.

Although this is not the first time Jaguar has dipped its paw in the mid-sized saloon sector (you may remember the X-Type from ‘01 to ‘09), the company opted against drawing reference to its heritage during its opening presentation, focus instead on the XE as ‘a true driver’s car’ and its ‘Jaguar-ness’.

Among the most highlighted elements of the new XE is its modular aluminium-intensive architecture, an extremely flexible and lightweight component that offers Jaguar an effective blank canvas for body style design, is made from recycled raw materials, and which made its headline-grabbing debut last year as part of the C-X17 SUV concept. Said structure is fabricated at Jaguar’s new aluminium bodyshop in Solihull, a $2.5 billion facility equal to the size of 22 football pitches and capable of producing one vehicle every 28 seconds.

Attached to the new lightweight architecture is revised double wishbone and integral link suspension, traditionally reserved for the company’s higher sector models. While the front double wishbones offer ‘XFR-levels’ of precision – aided by high-strength aluminium alloy used for high body rigidity – the rear controls ride comfort. Stated to be ‘the slipperiest Jaguar ever’ thanks to significantly reduced aerodynamics via that aggressive looking bodyshape, a smooth underbody also creates a diffuser effect to stop the rear end lifting at speed. 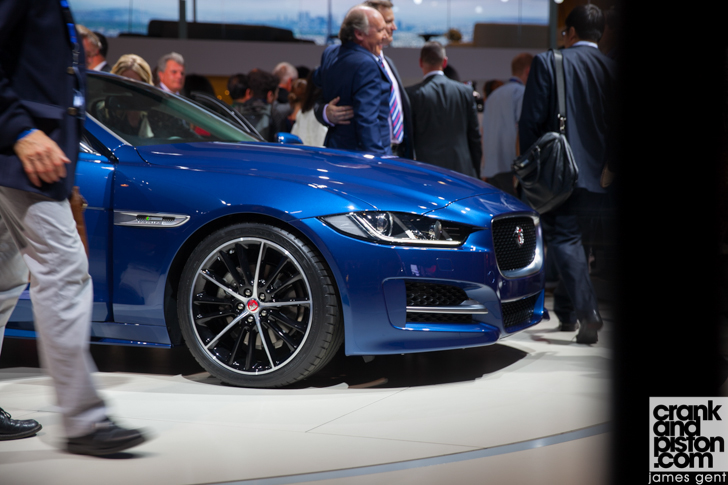 Among Jaguar’s new engine options are a 2.0-litre four-cylinders – available with either 200hp or 240hp – and the range-topping 340hp 3.0-litre V6 for the XE S, which is straight out of the F-TYPE (give or take a tweak here and there) and comes complete with a twin vortex supercharger. Power is sent to the rear wheels via a revised version of Jaguar’s eight-speed ZF automatic gearbox, though the company has intimated that an all-wheel drive derivative of the XE could make its debut soon(ish). Stating rather snappily that ‘friction is the enemy’, both the four-cylinder and the V6 come with revised cylinder heads and pistons as well as direct fuel injection for improved responsiveness. While a six-speed manual gearbox (Jaguar’s first since 2009) will also be available, this will only come with one of the XE’s new 2.0-litre Ingenium diesel engine, available with either a 163hp or 180hp power output.

Electronic power steering also makes its debut on the XE, a more efficient equivalent to the hydraulic system it replaces. The new steering system not only allows greater range for fine tuning the steering but also allows park assist and lane departure warning – amongst other driver assistance technologies – to make their respective Jaguar debuts. One of the more interesting innovations for the new XE is All Surface Progress Control (ASPC), a pseudo-form of traction control for improving traction control at low speeds. Power and torque is distributed across the rear axle to reduce tyre slip through the 17-inch wheels (though options up to 20-inch are also available) without the driver having to work the pedals.

This heightened sense of ‘Jaguar-ness’ – and yes, that is an actual phrase being used – will make its international debut tomorrow, with crankandpiston.com front and centre on location to bring you the news as it happens.