The McLaren 650S GT3 made its competitive debut at the 2014 Gulf 12 Hours. crankandpiston.com decided to dive in for a close look.

As is often the case when it releases a new model, McLaren already had an enormous benchmark in place when it launched the brand new 650S GT3 at this year’s Goodwood Festival of Speed. Its predecessor, the 12C GT3, in just three full seasons of competing globally had taken three GT championships, 51 race victories and a further 71 podiums on top of that. When the new 650S GT3 landed in Abu Dhabi for its race debut at the Gulf 12 Hours (like the Bentley Continental GT3 before it), all eyes were on how Woking would handle the competition. crankandpiston.com were keen to find out first-hand at the Yas Marina Circuit.

There’s just under an hour ahead of the second six hours of the race (since its inaugural run in 2012, the Gulf ‘12 Hours’ has encompassed two six-hour races split by a two-hour interval), and so far things are looking good. Having emulated its predecessor with pole position on its race debut (the 12C GT3 doing so at the 24 Hours of Spa in 2011), the 650S GT3 maintained position in the top three for the first three hours – leading the way at intermittent moments – and was still lying third as the race entered the halfway point. With the world’s automotive media focusing on pit garage 26 at Yas, a podium and even victory seems do-able. Indeed, ahead of a full GT program in 2015, a strong showing for both #60 and #59 – the same number used by the legendary F1 GTR #01R when it won the ’95 24 Hours of Le Mans – in the Middle East is crucial. For McLaren GT MD Andrew Kirkaldy though, it’s just another step of a two year- test program and the ‘natural progression of an already successful racer’.

“Honestly the Gulf 12 Hours just works for us,” he told crankandpiston.com. “It’s just the right time of year to get here, get some racing done, and see what we may need to change ahead of the full season next year. We’re a little bit harder on fuel than we’d like but we’re quite happy with where we are at the moment.” 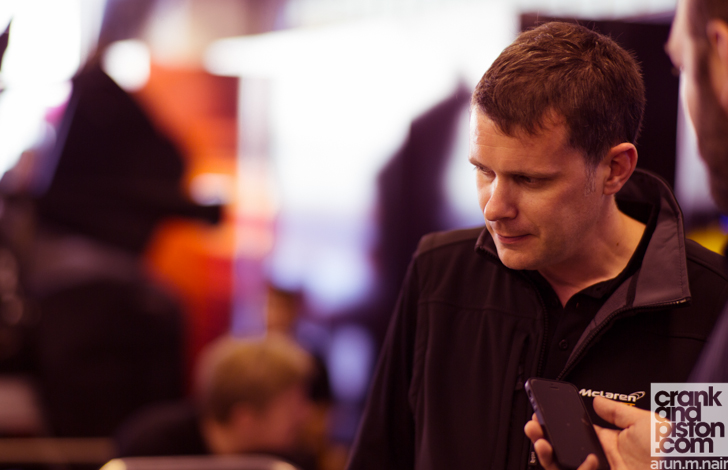 Given that the only cars ahead of the #59 650S GT3 – one of two McLaren GT’s entered – are former winners AF Corse (Ferrari 458 Italia GT3) and the Abu Dhabi Racing Black Falcon team (Mercedes SLS AMG GT3), Andrew’s confidence is justified, especially when we take a closer look at the 650S GT3 itself. Built on the base of its illustrious predecessor, McLaren’s second generation GT racer is the product of Computational Fluid Dynamics, and thus – as you expect – is hideously complicated. In layman’s terms (which fortunately Andrew sticks to for our benefit), key aerodynamic strengths lie in the aggressively designed front splitter, lightweight carbon-fibre bodywork, a wider track, the 2m long fixed rear wing, and air intake-heavy front bumper (through which the McLaren ‘face’ remains). Though they share the same name, there’s little the 650S GT3 shares with its road going namesake.

“Relative to the road car, there’s a big difference,” Andrew continues. “The roof and side panels are the same but nearly all the other panels are new and carbon fibre. The rear three-quarter is blended into the chassis, and that’s so we can go about 100mm wider, front and rear. That means we can then fit the wider slick, which is a regulation thing but also probably the biggest difference between the 650S GT3 and the 12C. The tyre has to come out and forward to work around the chassis, and that makes a difference in terms of bodywork. We’ve got good aero, so the car is very forgiving and easy on tyres.

“Interesting thing about this car,” Andrew continues, pointing to #59 just in front of us, “is that this was one of the original cars made into a GT car, so this has already done more than 50,000km. This MonoCell chassis actually started life as a 12C GT3 and is now a 650S: RP02, as in Race Prototype 02. The other is a brand new car and is chassis number one of 650S GT3.” 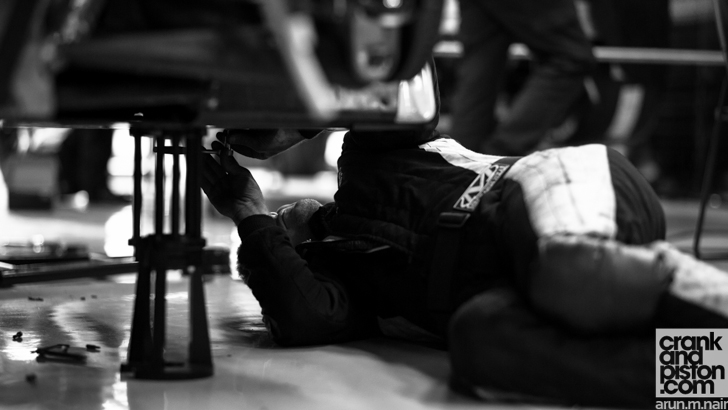 It’s not surprising Andrew has focused in on the MonoCell chassis first. Such is the structural rigidity of McLaren’s patented carbon fibre monocoque that little modifications were needed for both the 12C and 650S’ convertible counterparts: the more McLaren savvy amongst you may even remember that the 12C was originally designed to be a Spider. Prepared for the race rack – and endurance racing in particular – the MonoCell has thus received few changes, save the FIA-approved roll cage and mounts for both bucket seat and the six-point race harness. This wouldn’t be Woking though without at least some tweaking, the MonoCell shaving weight over that found in the 12C GT3. In a car that only weighed 1330kg to begin with, weight saving was difficult but not impossible.

“Obviously there’s no interior, so that’s quite a major saving. All the panels are lightweight carbon too so that makes a difference, but ironically we need to add a little weight before we take it off thanks to the roll cage, different uprights, centre-fixing wheel hubs, etc. The road car gearbox weighs about 130kg, while the gearbox in this weighs about 56kg, and that’s because it’s not a twin-clutch: we also want more weight forward in the GT3, so a lightweight gearbox at the back is preferable. So although you’re taking quite a lot of weight away, you’re also adding quite a bit too, so it’s lighter than the road car but not dramatically. As it stands today, it’s about 1275kg.” 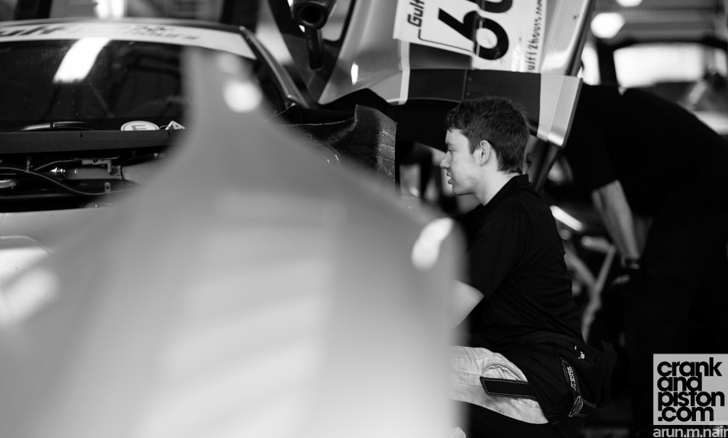 On top of the new aero bodykit, double wishbone suspension geometry has been modified for improved balance, a 125-litre race tank has been installed as has a ‘quick-fill’ fuel system, a ventilated Monobloc race-spec braking system, new eight-spoke 18-inch aluminium wheels clad, and an air-jacking system. For customer teams eying 15 of the already produced 650S GT3s, this carbon fibre bundle retails for $520K. Plus tax. And this is before performance of the 3.8-litre M838T twin-turbo V8 comes into play. Ironically, despite the 641bhp 650S pumping out 25bhp more than the 12C road car, performance figures for their GT racing equivalents are almost identical.

“We had certain things on the 12C GT3 that we wanted to make better, so that brought with it some natural evolution and the engine was part of that. It’s the same engine with a few small modifications, although it’s got less power than the road car. The M838T goes through a much harder GT cycle during the races, so more than power we need to make sure it’s reliable. We’re in a balance of performance (BOP) formula, so power is around 500bhp and is around the same across the board.”

The hive of activity around us picks up apace as suddenly #59’s twin-turbo V8 fires into life. There’s now only 15 minutes before both GT3s have to be on the grid ahead of the second race start, and though it’s tempting to stay and watch the preparation in full, we figure now is a good time to bail. With a smile and a shake of the hand, Andrew disappears back into the maelstrom. Some six hours later, after a prolonged and exhausting first endurance event that saw just three seconds separate winners AF Corse from the Black Falcons, McLaren GT are celebrating a debut podium for the #59 650S GT3, Alvaro Parente, Kevin Estre and Rob Bell just a further two seconds behind after half a day of racing. It may have another 70 podiums, 51 race victories and three championships left to equal its illustrious predecessor, but the McLaren 650S GT3 is off to a good start.