THROWBACK THURSDAY. ‘That’ Isle of Man TT save by Mark Higgins

THROWBACK THURSDAY. Mark Higgins has ‘the biggest moment of [his] life’ on the Isle of Man TT course in 2011 on his first record-breaking attempt on the mountain. 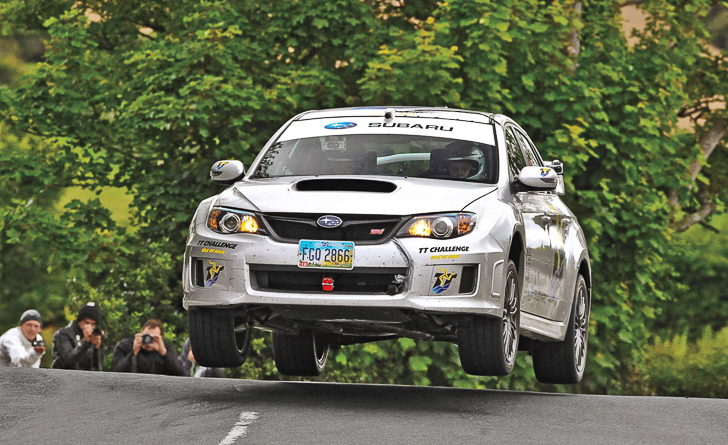 Mark Higgins is no stranger to the Isle of Man TT course, having set a new record in 2011, broken that again in 2014, and returned this year to completely destroy it in a Subaru WRX STI Time Attack. I won’t go through all the details, since you can watch the video itself HERE.

While it was tempting to post the on-board footage from Higgins’ 2014 run for this week’s Throwback Thursday – but, what the hell, we’ve included it anyway – we just couldn’t ignore what Mark himself calls ‘the biggest moment of [his] life’ as the back end of the Subaru goes VERY sideways on him as he catches a bump in the road at an unfortunate angle. Even the man himself questions how he manages to save the sixth gear, near-250kph shunt, something we’re scratching our respective heads about too.

Kudos to Mark’s passenger though who, aside from some slight shifting of the eyes, manages to maintain a balls ludicrous amount of composure during said tank slapper as several garden walls flash in front of him, his white race suit somehow remaining just that in the process. Credit to both of you gentlemen.

Of course we all know how that weekend ended, the three-time British Rally Champion taking the US-spec STI round the 60km course in 19m 37s, devastating the 22m 9.1s record the late Tony Pond had set in a V6-powered Rover 827 Vitesse (yes, really) 21 years earlier. Bear in mind, at an average speed of 102mph (164kph), that was the first time a car had broken the 100mph barrier on the TT mountain.