Subaru’s headline act at the upcoming Detroit motor show will be a US-market version of the venerable Subaru WRX STI. Dubbed the S209, the newcomer follows codenaming convention normally reserved for the Japanese-only go-faster Impreza models  – the first was the Impreza WRX STI Type-RA S201 back in 2000.

Thanks to a new teaser, we can now see more of what to expect regarding the STI’s motorsport-inspired aesthetics – featuring wheelarch extensions on the already widened STI body for the first time. Similar 19-inch forged BBS wheels finished in a dusty gold finish are also visible, likewise the front canards, quarter vents and a stacked, motorsport-style rear wing

In Japan, all ‘S20’ models feature significant engine tweaks, usually squeezing a few extra bhp from a high-revving EJ20 2-litre flat-four turbocharged engine that is exclusive to the Japanese market. Outputs for the current Japanese S208 model stand at 320bhp with a heady 8000rpm redline, 24bhp more than the last UK-specification WRX STI Final Edition. That car, as do all -JDM STI’s featured a 2.5-litre turbocharged unit, with a much lower 6750rpm rev limit. It’s as yet unknown whether the JDM 2-litre engine will be used in the US model. The latest S208 model in Japan also features a water injection system for the intercoolers, similar to that on the latest Porsche 911 GT2 RS, but rather than being automatically controlled it’s operated manually, via a paddle behind the steering wheel, which is so much cooler, if you’ll excuse the pun….

Like he current JDM S208, the new model might also feature a completely revised front subframe, revised suspension wishbones, new Bilstein springs and dampers (adjustable on the front axle), chunkier Brembo brakes and a much faster (11:1) steering rack. A lighter carbonfibre roof, thinner Recaro bucket seats and active torque vectoring were also part of the package, it remains to be seen if they’ll be integrated into the US model.

We’ll find out all the specifics come 14 January, but for the campaign to bring back the STI to the UK starts here. It may have been in the clutches of high-end hot hatchback rivals like the Honda Civic Type R, but the STI is still a unique entity in the performance car market, especially with that zingy 2-litre motor. We can only hope. 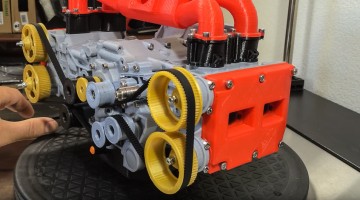