In a world already bursting at the seams with luxury GT machines, is there room for one more? We find out on a road trip with the Ferrari FF, the Bentley Continental GT Speed, the Aston Martin Vanquish, and the new Mercedes S 63 AMG Coupe.

It’s a raw, visceral sound that      echoes about the canyon walls, its source as of yet out of sight and the erstwhile low-pitched hum intermittently turning into a high-revving, deep-throated scream as the eight-speed auto downshifts. Soon the Carbon White example – an Aston Martin Vanquish – hoves into view and slows to a halt next to us, the Ferrari FF and Bentley Continental GT Speed also included in today’s Luxury GT group test following suit. If the compromised dynamism of a hardcore sports car is not for you, and you’d rather lash out a cool quarter of a million dollars (give or take) on the civility of a luxury GT instead, these are three of the finest examples you could sign on the dotted line for today (and we’ve yet to introduce our newest contender). Indeed, their drivers are soon stepping out onto the already baking tarmac of Jebel Jais, a mixture of excitement and bewilderment plastered across each of their faces. The “holy hells” that traditionally follow a hoon through the mountains are dealt with accordingly, but there’s one question – fired at me by crankandpiston.com stablemate David Fernandez – I had not expected.

“Yeah, but is the Vanquish a PROPER GT?”

Well, on the face of it, yes. I mean, it’s an Aston, and a Vanquish to boot, the British marque’s headline performance weapon since the DBS’s retirement in 2012. It’s among the most legendary premium models on-sale today, is as British and refined as they come, and boasts a wallet-pulverising price tag of $325k. How could a Vanquish of all things NOT be a luxury GT?

And yet several hours later, I’m furrowing my brow at exactly the same question. Which surprises me, since I’d expected the majority of today’s comments to focus on the brand new Mercedes S 63 AMG Coupe, the fourth and final contender of our luxury GT group test and, in many ways, today’s black sheep. 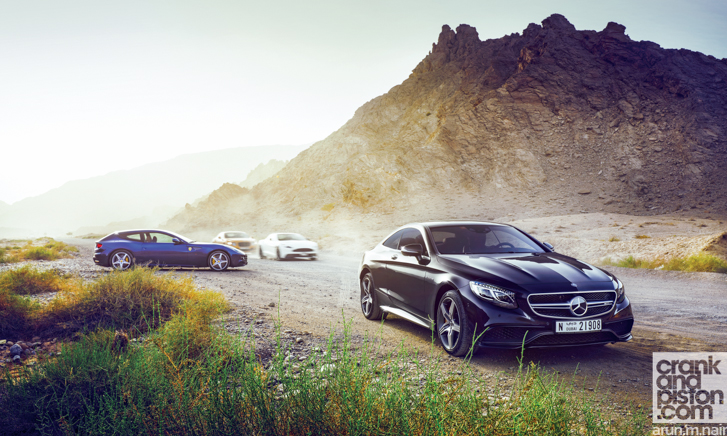 And on the face of THAT, you’re probably thinking I’ve gone potty. This after all is an S-Class. A two-door, AMG performance-orientated version granted, but an S-Class nonetheless, and thus one of the most influential luxury machines on sale today. Indeed, when we took a spin in the S 63 AMG Coupe on its international launch last year, we were not only staggered by how refined the newboy proved to be, but also how spirited a drive this two-tonne plus luxury grand tourer could produce.

With a stellar reputation and a thumbs up from the team already in its pocket, how could the S 63 of all things be considered today’s black sheep? It’s not like the Merc receives a thumping from a performance standpoint either. Boasting 577bhp from a twin-turbo V8, the Merc slots neatly between the 651bhp V12 FF and 626bhp W12 Bentley, and the 565bhp V12 Vanquish, while barely half a second covers all four on the sprint from zero to 100kph. A slouch the S 63 most certainly is not.

Take a closer look at the contenders though: a $365K Aston Martin; a $310K Ferrari and a $268K Bentley. And a $186K Mercedes. There’s no getting away from it, that is a colossal difference in price, and that’s got us curious. Could the ‘cheapest’ luxury machine of the four actually topple an Aston, a Ferrari and a Bentley? We were keen to find out. 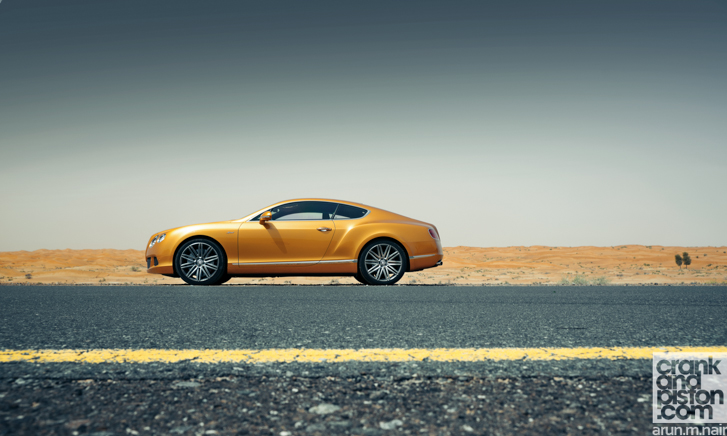 With David and fellow crankandpiston supporter Romain Lutter (who’s also a Radical Middle East Cup ace, by the by) busy arguing over the keys to the Aston and the Ferrari, I make a beeline for the GT Speed, the fastest production Bentley ever made. Okay, the additional 10bhp gained from drivetrain tweaks mean this title is claimed by the skin of the molar and will be noticed only by the most ardent of Bentley supporters at a horribly illegal 331kph, but it’s yet further proof of the potential lying beneath that enormous kerb weight. At 2320kg, the Bentley is easily the heaviest GT here, and with origins dating back to 2003, it’s also the oldest. However, tweaks, updates and various abbreviations attached to the bumper mean it remains one of the finest luxury GTs on the planet, and quite possibly, the benchmark of the segment.

Alongside some cosmetic fine tunes – including a new front splitter, rear diffuser and some bespoke 21-inch ‘Speed’ design wheels – the revised GT comes with a reduced ride height, and both a stiffer chassis and anti-roll bar for improved cornering. These alone have not turned the two-tonne Bentley into a whippet-like Caterham, but on our first run up the hill, the Continental is no wallowy bag of understeer. There’s balance and precision through the higher speed turns, even if feedback through the steering is not quite up to the task. It’s remarkable how well this behemoth hides its considerable mass, weight transfer only becoming excessive as we hit the tighter turns, that bulk giving the carbon-ceramic brakes some serious work to do. Aston, Ferrari and Mercedes-like specks in the rearview – now that the boys have saddled up – start getting bigger. 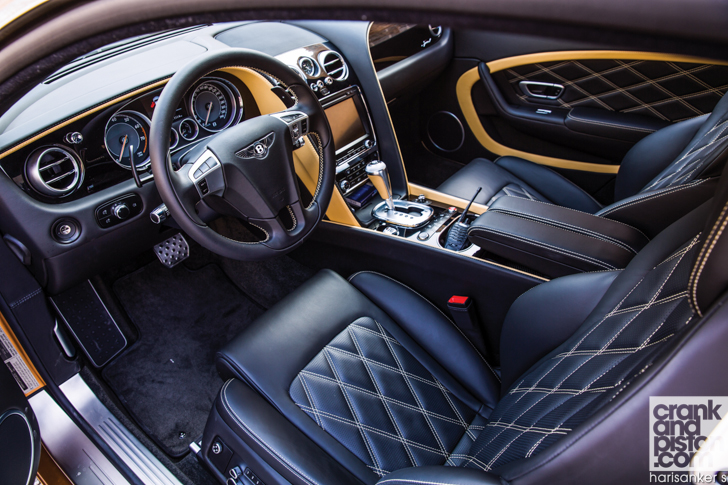 Out of the corners though, it’s a different matter, the sheer pull from that 6-litre twin-turbocharged W12 and 607lb ft of torque is almost beyond belief. Distances are devoured in mammoth gulps as a solid wall of torque hustles the Bentley forward with insistence. Pull that, rather bizarrely, does not affect comfort in the cabin. Re-adjust the suspension from Sport to Comfort (realistically you won’t feel a huge difference between the two anyway), and energetic driving has rarely been this luxuriating, good lumbar support working in tandem with bags of legroom and superb ride quality. Once this part of the test is over, it’s the Bentley’s silky smooth cruise we’re all clamouring for on the 90-minute jaunt back to Dubai.

By the time we hit the top, both the Aston and the Ferrari have caught the Bentley, though Yazan in the Mercedes has wisely opted for discretion over valour on his first run up the mountain and is still on the climb. Pity. Having seen the impressive benchmark already laid down by Crewe, I’m tempted to jump straight into Stuttgart’s latest to see how it compares. Incredibly though, David and Romain – having driven both – are still talking about the Aston Martin: “I can’t believe how well this thing handles”; “it’s incredible, I mean, I knew it would be good but it’s just brilliant”; “what do you think about the V12?”; “great noise, but I think the Ferrari’s is better”; “no no, you can’t possibly say the Ferrari’s V12 makes a better soundtrack than the Aston’s”, etc and etc. Time to see what the Aston brings to the Luxury GT table. 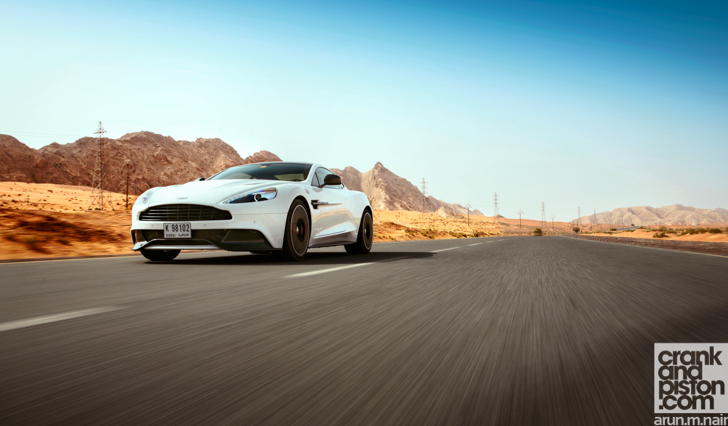 A trendsetter the Bentley may be for luxury cruising, but for sheer handling the Aston leaves its fellow Brit for premium dust. Updated since its 2012 release with a new front splitter and carbon rear spoiler, a new interior, improvements to the bonded aluminium chassis and a whole 1kg(!) lighter, the Vanquish is – there’s no other word for it – spectacular.

As the only front mid-engined rear wheel drive model in our quartet, the Aston is without question the liveliest through the turns, the insanely grippy front tyres holding firm as 565bhp encourages the rear wheels to twitch into oversteer. It’s all business on the long sweepers though, an über low centre of gravity and magnificent balance negating the concept of body roll entirely, the front end darting from apex to apex. Turn-in response is simply beautiful, mid-corner feedback from the front wheels a revelation after the rather hesitant feel in the Bentley, though on pure accelerative drama, the GT Speed still has the edge. From the off, pull from the V12 is not as ‘kick you in the back teeth’ aggressive as one might expect, the drama and joie de vivre being saved for that mid-corner balance and handling, and – naturally – the emotive V12 soundtrack that only an Aston can produce. It is a truly gorgeous sound and yet, ironically, not my favourite from the day. But I’ll come back to that. 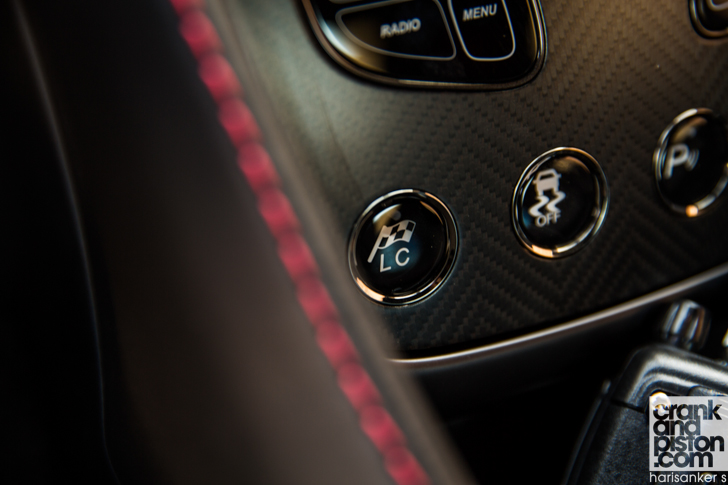 Hands down then, even despite solid efforts from its contemporaries, the Aston offers the best handling of the three, though David’s earlier words – as the road starts to open out and long stretches of road span out before us – keep on coming back to me. It’s true the Aston is a fabulous machine, but even I am wondering whether its more sports car than true GT.

The interior, though gorgeous and a vast improvement over the out-dated layout found in the DB9 and the Vantage, remains a little too snug for prolonged journeys. The driver’s seat for instance is mounted much higher than I’d expected for such a weapon, leaving barely an inch of headroom. That glorious V12 soundtrack I’d happily go deaf to, but road roar and wind noise is a trifle too excessive. And while the seats prove superbly supportive when being thrown from side-to-side on the mountain run, the ride itself when we’ve calmed down and started driving Miss Daisy is just too stiff. The Aston may have ruled the mountain and won everyone over with both its looks and its soundtrack, but as a luxury GT it’s got some serious catching up to do to match the Bentley. And, for all we know, the black sheep Mercedes. Two runs down, two to go, and our next contender is the one I’ve been looking forward to the most, the Ferrari FF.