May 10, 2015 James Gent
We cannot display this gallery

Given the enormous grin Romain has plastered on his face after a couple of runs in the FF (plus the combined force that’s required to prize the prancing horse key from his vice-like grip), I think we can safely kybosh the idea that this is ‘not a proper Ferrari’, as so many have suggested of Maranello’s first ever four-wheel drive model. Granted, given the ‘breadvan’ body styling and enormous boot space, we’re unlikely to experience 458-levels of aggression and poise back up the hill. But that certainly doesn’t mean the FF is a slouch.

Indeed, it’s the responsiveness of the steering that catches me off-guard when I first jump behind the wheel, the speed and lightness a far cry from the more weighted setup in the Aston and slightly woolly response in the GT Speed. Like Ferrari’s systems before it, the steering in the FF is almost unnervingly quick and takes me a few corners to get used to. Once I have though, the feeling is incredible. Unlike most four-wheel drive systems, the setup in the Ferrari utilises two gearboxes, one allocating full power to the rear wheels, the other diverting to the front should they lose traction. I’d need several extra pages and a doctorate in engineering to explain the technical idiosyncrasies in full, but suffice to say traction from the 4RM system is such that whopping great power slides are a no-go. Though lacking a Speciale’s aggression through the turns, the FF is nevertheless impressively agile, the nose almost dart-like as it changes direction, the responsiveness of the steering easily tricking you into forgetting that sizeable 1880kg kerb weight, and a low centre of gravity eradicating body roll altogether.

It’s the gearbox though that truly impresses, the Formula 1-inspired seven-speed dual clutch gearbox offering uninterrupted acceleration and a tangible kick between shifts. Just in front of me, red lights illuminate on the steering wheel the higher the revs rise. It’s a red flag to a bull, the gearbox receiving more and more punishment the further up the climb we go, the speed of each change never less than spectacular. Though the Vanquish’s setup is impressive, the thrashing the FF’s ‘box withstands as revs are taken well past the 8000rpm mark is immense. And with high revs and 651bhp being unleashed comes that familiar, spectacular Ferrari soundtrack. It fills the extended cabin, growing more high pitched and beautifully furious the further up the rev range I go: it’s all I can do to prevent myself laughing out loud. Until I realise that my associates probably won’t hear me even if I did. So I do. 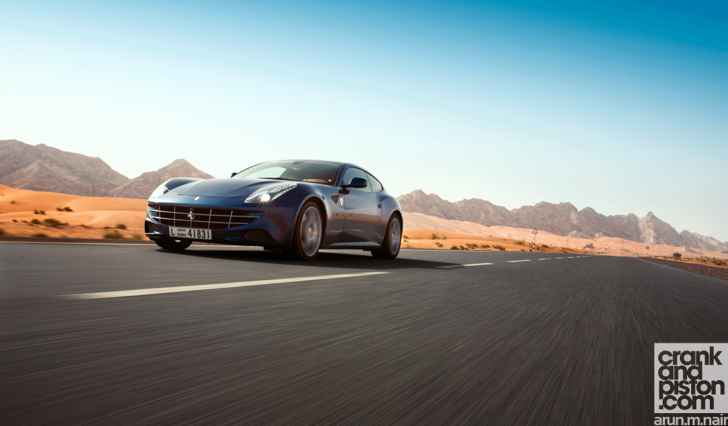 Make no mistake, the Ferrari is a truly stunning piece of kit, and anybody who’s heard that soundtrack and still insists the FF is ‘not a proper Ferrari’ can leave their gearhead card at the door. And yet, even despite the glorious soundtrack, the stellar handling, awesome gearbox setup, Pininfarina styling and beautiful balance, something is still not quite right. Lacking the ballistic dynamic edge of a 458, the FF is easily the most comfortable Ferrari I’ve experienced, but the ride quality – given the more rigid lightweight chassis and sports car-derived suspension – is not quite up there with the Bentley’s. It’s not jarring or needlessly uncomfortable, plus decent room for four and intuitive infotainment system controls (not counting the minefield that is the multi-function steering wheel) mean prolonged journeys are not a prospect to quiver in terror at. But still, the body-hugging seats – perfect for lumbar support through the turns – do start to leave me with a stiff back, while intermittent issues with the air conditioning leave me wondering if I’m playing with fire.

Which brings us, eventually, to the black sheep. The Mercedes S 63 AMG Coupe. Amidst the furore of the Ferrari’s character and soundtrack, the Bentley’s civility and almighty acceleration, and the Aston’s gorgeous looks and devastating handling, the Mercedes thus far has barely got a look in. To our eternal folly it turns out. 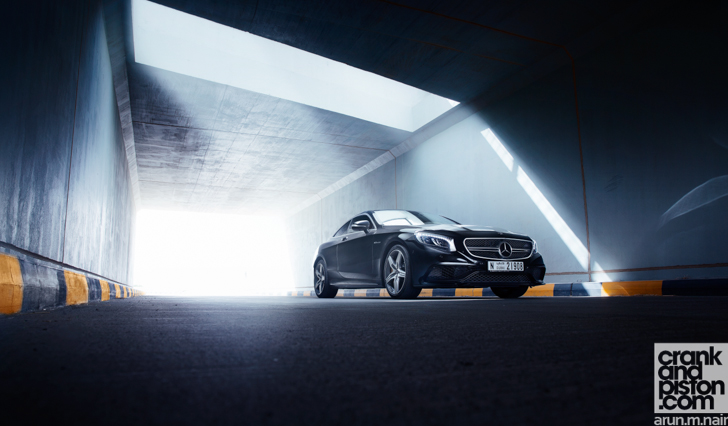 With the new S-Class, Mercedes has worked hard to improve cabin comfort and practicality, a longer wheelbase both increasing rear legroom and offering greater stability through the turns, while the revised dashboard is amongst the most spectacular interior designs we’ve come across yet.  Unsurprisingly they’ve made a big difference, noise levels in the cabin whisper-quiet, ride quality superb and the ease with which the kilometres are eaten up from the adjustable (AMG-monikered) leather seats just magnificent.

It’s not the comfort that surprises me though. It’s not the balance, the handling, the practicality or the civility. It’s the speed. Holy hell, this thing can shift. I mean, PROPERLY shift. Effortlessly the Mercedes – while still in Comfort mode – has launched it’s way to the ton thanks to 664lb ft of torque shifting the earth on its axis. It’s similar in pick-up to the Bentley, and yet bizarrely, doesn’t have quite the same dramatic ‘whomp’ as the GT Speed. Dramatic, but pillowy. It’s an odd and amazingly effective combination. And we’ve only just started.

Still the rev needle continues to rise, sprinting past 120kph into figures I shouldn’t mention in print, 577bhp being delivered effortlessly and insistently. The numbers tumble and still there’s no sense of the Merc’s composure starting to give. Even as we enter high speed corners, the AMG is beautifully composed, the realization that I’m travelling at this speed so easily, boggling my mind. One key factor in this endeavour is the AMG Magic Body Control, a world first when it made its debut. Basically suspension with ‘eyes’, the system scans the road ahead and automatically adjusts the dampers, allowing the Merc to effectively lean into the corners to reduce lateral load. Don’t think this is to improve cornering speed either. This is a system that’s actually been designed to improve cabin comfort. It’s working, and the Aston, the Bentley and the Ferrari are well out of sight before I finally lose my nerve and start to slow up. This thing is just astonishing. 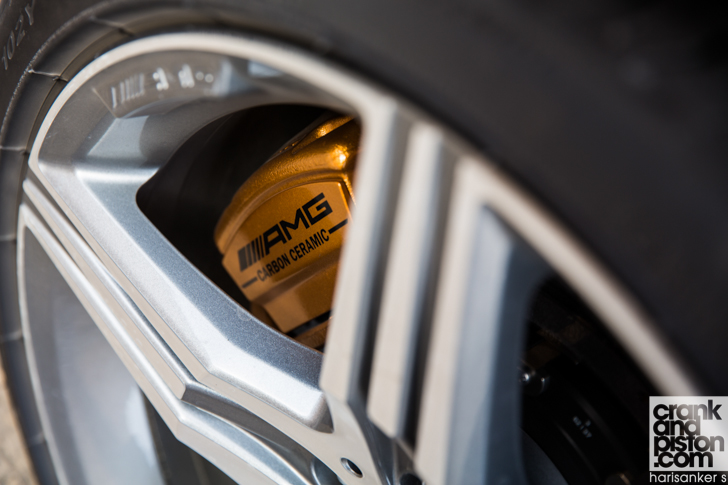 Back to group test speeds, the civility of the ride has not reduced even when I slip into Manual for a blast through the slower corners. Once again, the Mercedes handles itself impressively. Though there isn’t the same precision through the turns as the Aston or the Ferrari, there’s limited body roll to affect momentum, good – albeit slightly woolly – feedback through the wheel when you press on. Massive stoppers meanwhile help bring the 2070kg brute to a stop without squirreling under load. Helpful when you’re hitting speeds that will send you straight to jail.

Truth be told though, the S 63 – like the Bentley – is not a thrilling driver’s car (though the speed might trick you into believing otherwise). The steering is not quite as precise as the Aston, the V8 rumble not as characterful as the Ferrari, and the acceleration not as dramatic as the Bentley. Even the balance, magnificent as it is for a car of this size, is still not on a par with the Aston, the Ferrari or even the Bentley, a realisation that surprises all of us.

Indeed, it’s not quite enough to win over Romain, who though impressed with the Merc can’t bring himself to vote against the Ferrari, the combination of its performance and civility – and THAT soundtrack – winning him over entirely. David and Yazan meanwhile, though mightily impressed with the Aston’s handling, admit that as Luxury GTs go, the Bentley still rules the roost, it’s breathtaking acceleration and refinement finding the perfect balance. 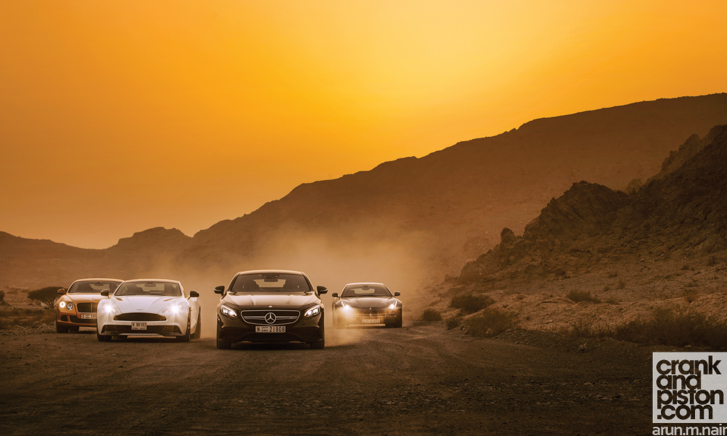 And yet, there’s something drawing me to the Mercedes. Though bested in almost all areas by its rivals, I can’t honestly say there’s anything overly WRONG  with the S 63. As a luxury GT machine, I’d expected more civility and a smoother ride from the Aston Martin, despite its formidable handling prowess. Ditto the FF, which handles as any self-respecting prancing horse should, but can’t quite let go of that sports car DNA. And the Bentley, though superbly comfortable and refined, doesn’t quite handle the turns as a GT machine should.

And then there’s the Mercedes, superbly weighted for impressive rather than spell-binding handling and cornering ability, magnificently built and designed both inside and out, and amongst the most luxurious and civilised rides in the world. Part of me wants to choose the $365K Aston. Part of me wants the $268K Bentley. And part of me really, really wants the $310K Ferrari.