Almost a decade since it entered production, the McLaren P1 hasn’t lost its charm, and demand is still strong for Lanzante’s bespoke upgrade packages. Following the firm’s F1 GTR Longtail-inspired P1 GTR-18 and GT, it has now devised a set of upgrades referencing the High Downforce Kit first offered to buyers of the iconic McLaren F1.

Originally designed to blend elements of Le Mans-winning F1 GTR-01R with the safety and niceties of the road car, Lanzante has applied the same formula to the P1. At its core is an ordinary road-going example, but exterior elements from the GTR are combined with performance and interior upgrades to make it a truly unique machine.

The first step in the conversion process was complete disassembly of the P1 back to its carbonfibre tub at Lanzante’s Petersfield workshop. New uprights and uprated suspension componentry are then fitted to allow for the increase in aero load, with revised rear bodywork, louvred front wings and the rear wing from the P1 GTR also equipped.

In the case of P1 HDK 002, the buyer requested a powertrain upgrade, and so Lanzante turned to none other than Cosworth for assistance. The result is an increase in capacity from 3.8-litres to 4-litres, with combined power now quoted at just shy of 1000bhp, a rise of almost 100bhp over standard – the torque curve is also now said to be more linear than before for improved response.

Inside, new gloss black switchgear, carbonfibre trim, HDK headrest emblems, a bespoke driver’s sill plaque, new pedals and Daytona-style seats referencing those from the F1 HDK also set it apart from a standard car. As with the majority of its McLaren conversions, the firm has also swapped the IRIS infotainment button for the Lanzante logo.

Following on from P1 HDK288, the Verde Ermes car revealed at Pebble Beach last year, the second example first made an appearance at Goodwood Festival of Speed before receiving its 4-litre Cosworth-developed engine. A third example is already under development and is set for completion in summer 2022.

Pricing for the conversion is upon application, but if you have to ask… 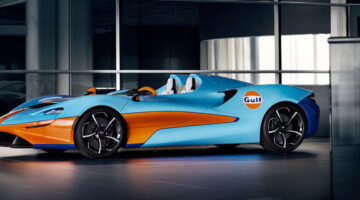