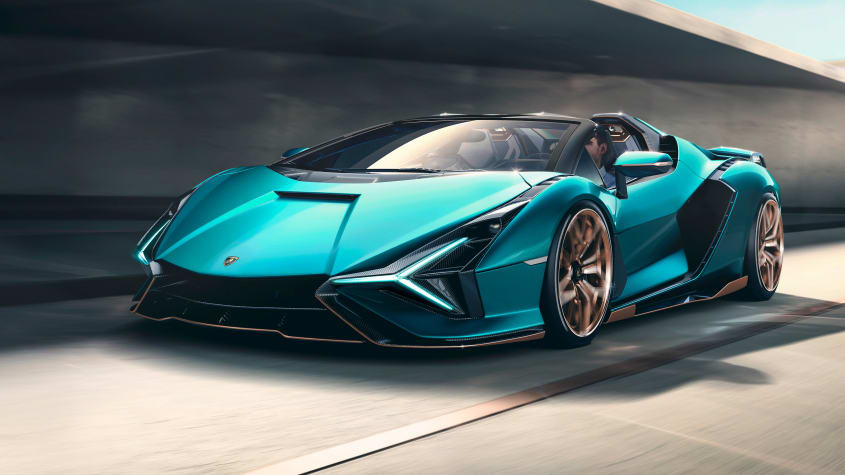 Named after the late Ferdinand Karl Piëch, former Volkswagen Group head, the Sián FKP 37 coupe was launched at 2019’s Frankfurt motor show. Though the first example is yet to hit the road, Lamborghini has already launched a roadster variant, making its electrified V12 thrills open-air. The roadster will be limited to only 19 units, and all have already been accounted for.

Though based on the Aventador’s chassis, the Sián will sit above every model the marque currently offers, with it boasting more power and performance than any of its other offerings. A hybrid powertrain is what’s behind the increase in numbers, but fear not, as you’ll still find the famous 6.5-litre NA V12 at its heart.

The use of titanium intake valves lifts output of the V12 from the SVJ’s 760bhp figure to 774, but it’s the hybrid technology that sets it apart from the rest. Though a substantial increase in weight is usually associated with electrification, the Sián’s hybrid entire system weighs only 34kg. While traditional set-ups utilise heavy lithium-ion batteries, Lamborghini has turned to supercapacitors…

Although ordinary batteries can hold a charge for a much longer period, a supercapacitor is capable of collecting and expelling energy at a much faster rate. Mounted in the bulkhead between the cockpit and engine, it feeds a 48V electric motor mounted in the gearbox, providing an additional 34bhp for a combined output of 808bhp.

Though the motor’s output may seem insignificant, it’s said to help during low-speed manoeuvres such as reversing or parking, improving overall throttle response, and filling torque gaps during gear changes – this is especially handy in the Sián, given that it shares the same antiquated single-clutch gearbox as the Aventador, a unit renowned for its jerky shifts.

Thanks to the magic of supercapacitors, Lamborghini claims that a single brake application will fully charge the system – acceleration is then enhanced up to a speed of 80mph, with traction improved by ten per cent. Getting from 40mph to 70mph is said to take 1.2sec less than in the SVJ, with 0-62mph happening in under 2.8sec and top speed at over 217mph.

As if its hybrid system wasn’t cutting-edge enough, the Sián Roadster also adopts active cooling vanes at the rear that don’t require the use of electric motors; instead, specially selected materials respond to the temperature of the exhaust for movement.

The design of the Sián Roadster is said to have been inspired by models such as the Countach, with the brand’s trademark hexagonal touches to be found throughout in the tail lights and cabin. Despite the lack of a roof, Lamborghini claims it has the same aerodynamic efficiency as the coupe, with its rear wing only extending at speed to increase stability and downforce.

The cabin is near-identical to the one you’ll find in an Aventador, only with the addition of the portrait infotainment screen from the Huracán Evo, and unique 3D-printed air vents that can be customised with the owner’s initials. As with the coupe, buyers will be able to completely customise their cars through Lamborghini’s Ad Personam programme.

Though 63 coupes are set to be built, just 19 roadsters will roll out of Lamborghini’s Sant’Agata Bolognese facility. But should you be yearning for hybrid V12 thrills, open-top or otherwise, you’re out of luck, as all 82 have already been accounted for…