Deputy editor James takes the 2014 Jeep Grand Cherokee SRT8 for – what turns out to be – the most expensive drive of his life.

At crankandpiston.com, I’ve been lucky enough to drive Ferraris, Aston Martins, Porsches and the occasional Lamborghini. But this stands as the most expensive test drive I’ve ever conducted, courtesy of two whacking great speeding tickets.

Turns out the 2014 Jeep Grand Cherokee SRT8 is fast. Really quite fast.

While the newboy may share the 6.4-litre HEMI V8 under the skin of the Grand Cherokee we tested last June, it also comes with an extra 110hp and 75lb ft of torque. The car’s performance figures now stand at 470hp, 465lb ft, a top speed of 255kph, and 0-100kph in a staggering 4.9 seconds. At our disposal then is the most powerful Jeep vehicle ever made and an SUV that can out drag a BMW 435i M-Sport. Which goes a long way to explaining those tickets.

Aesthetically, the Grand Cherokee SRT8 doesn’t so much tease the performance lying beneath as smack you across the jaw with it. Building on the already handsome base of the Grand Cherokee, the SRT8 boasts a beefier bonnet with new air intakes, a brawnier front grille with added detailing, new blackened headlights, and – alongside new five-spoke 20-inch forged-aluminium wheels, chrome detailing about the windows and a ‘Grand Cherokee’ badge along the flanks – a cheeky tail lip rear spoiler. It’s a handsome look and an incredibly shouty one, designed more to leave pedestrians and fellow motorists quivering with fear than sit unnoticed outside the public library. 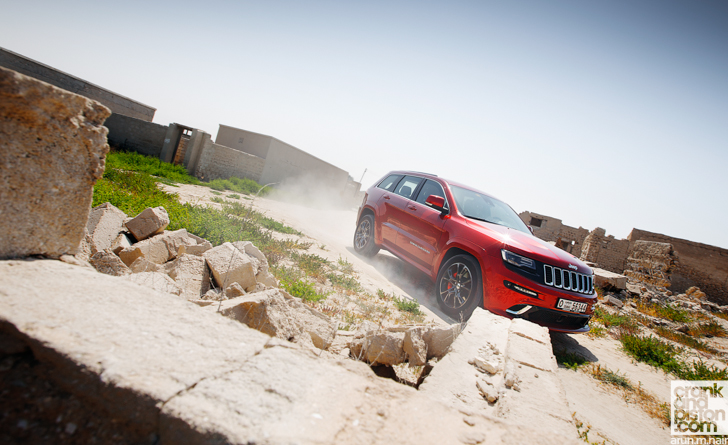 On the inside things get a little more civilised, though that’s not to say the cabin is any less spectacular. Alongside ‘SRT’ monikers on the steering wheel, along the door trim, on the floor mats and on the headrests, the black leather upholstery is interlaced with some rather sexy white stitching and aluminium-effect trim. On the centre console is Jeep’s updated infotainment system – complete with lateral acceleration readings and in-built 3G connection to help make the 2014 SRT8 the ‘most technologically advanced Jeep vehicle ever’ – navigating through which is a doddle via the 8.4-inch touchscreen. Further instrumentation is available via the new multifunction steering wheel, accessible once seated in the beautifully figure-hugging Nappa leather and suede seats. A few plasticky panels and a slightly too-cluttered dash can take the edge off slightly, but the overall effect is a striking one, offset nicely by plenty of head and legroom. It’s almost civilised, until you press the large red button on the dash marked ‘Start’. 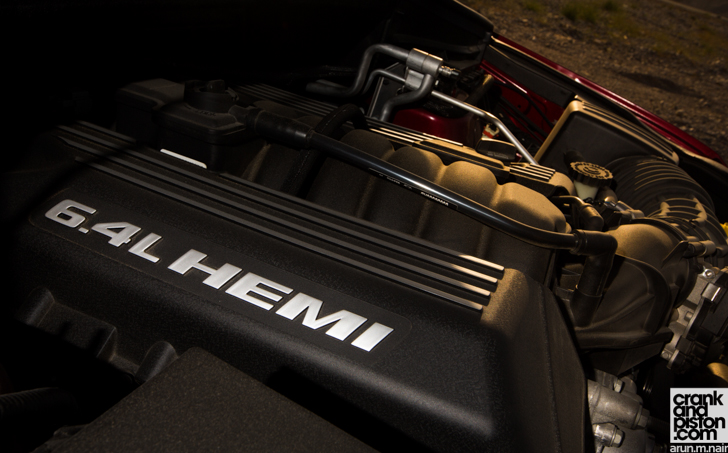 Pull from the off is quite incredible, even in Auto. Use the rotary dial by the T-Handle shifter on the centre console to select Sport and the HEMI V8 grows yet more ferocious. Even in a vehicle weighing 2336kg, 470hp proves amazingly aggressive when the HEMI bear is poked. Fortunately said aggression doesn’t prove to be a one-trick pony, thanks to crisp changes via the new eight-speed automatic transmission. Be it through the T-handle shifter or the surprisingly high-quality paddle shifters, smooth gear changes allow aggressive acceleration to continue well into high revs, the growl from the V8 rising to near-ear popping levels. Should you feel adventurous enough to try launch control, a new Launch button by the T-Handle sends 70 per cent of the 465lb ft of torque to the rear wheels. The high performance Pirelli tyres grip rather than light up, the pull ferocious from 3/4000rpm wrenching your whole body back into the Nappa leather. Orthopaedic surgeons rejoice, the Grand Cherokee SRT8 is incredibly aggressive.

Which makes the Jeep’s capabilities through the corners that much more surprising. Standing more than six-feet tall, I had expected the SRT8 to roar into corners at full pelt only to understeer hilariously wide when faced with even the slightest undulations. I was mistaken. Feel for the front end is very strong, and thanks to good weight distribution and tweaked suspension and Bilstein dampers, balance through the corners is quite remarkable. Even at the most ambitious of speeds (two tickets, remember), the front and rear Pirellis cling to the tarmac impressively, encouraging you to wrestle with the weighty steering and push the SRT8 through the corners. The sheer size of the 2336kg behemoth means that you’ll never feel like you’re in a deluxe sportscar, but trace amounts of body roll means you’ll be able to push much further than you’d expect, which for a HEMI V8 bruiser, is seriously impressive. 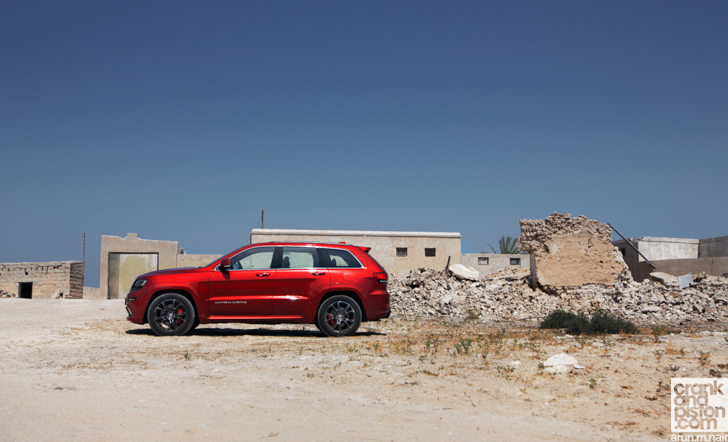 A sprint with the new 2014 Jeep Grand Cherokee SRT8 then has told me much as I had expected: it’s big; it’s loud; it’s brash; it’s an animal. And yet said animal is also astonishingly nimble, capable of attacking the corners with poise and proving itself to be much more than just a big muscular SUV. Poke the bear and it will roar, but it will also prove a lot of fun to throw at the landscape.

Just don’t expect the contents of your wallet to stay put for too long. 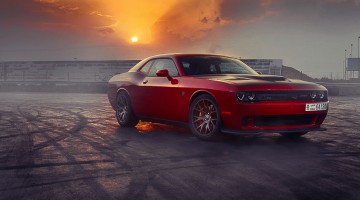