crankandpiston.com has tested the all-new Jaguar XF S for 2015, but how does it fare over its predecessor and is it worthy of that badge?

It may not seem the most obvious of cars to get excited about – it’s a mid-range saloon generally bought as a flash business workhorse – but I found it difficult containing my excitement about driving the new Jaguar XF. Not only is it close to my heart being British and all, but the model has been Jag’s bestseller since its launch in 2007 and has had a complete overhaul from the ground up. Off I popped to Spain for the international launch.

The new XF sits smack bang in the middle of Jaguar’s range, between its smaller executive sibling, the XE, and the more premium luxury saloon, the XJ. Its new architecture is now 75 percent aluminum, meaning that it is now 11 percent lighter (or 190kg) than its predecessor, weighing in at 1455kg. Torsional stiffness has also increased by 28 percent. The aesthetic changes meanwhile are subtle; the newly hidden window wipers, for example, were a small but well-received change when Jaguar began its redesign. It now features a double aluminum wishbone front suspension and new integral link rear suspension. Vehicle height comes in 3mm lower than the predecessor too, while headroom is increased by 27mm, and it’s 7mm shorter in length. 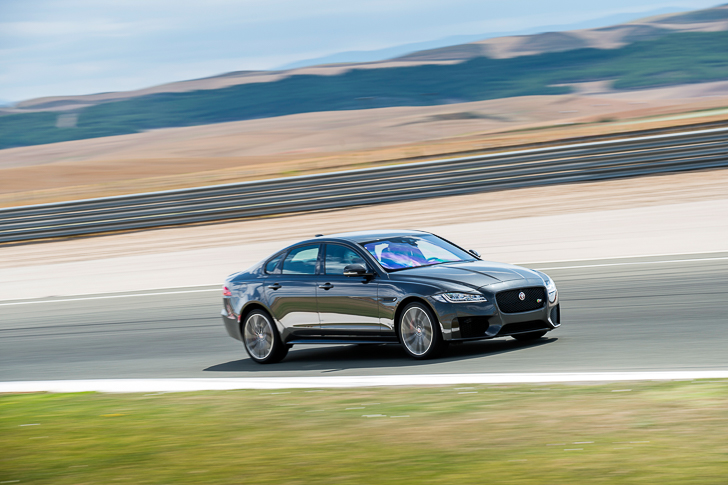 Offered in Prestige, R-Sport, Portfolio and S packages, engine options range from a 335bhp 3-litre petrol V6 up to the slightly more lairy 375bhp variant, both of which are available in either rear-wheel and all-wheel drive.

Jaguar had dry and wet courses set up at the Circuit du Navarra for day one (day two focused mainly on real-world road conditions), on which we would be unleashed with the (current) top of the range ‘S’. With an impressive 0-100kph of 5.1 seconds, helped by a respectable 332lb ft of torque, I was no doubt expecting to crack a smile. The comfortable driving position, thanks to those new sport seats, was among the first of its pros. The cabin is functional and of good quality material: even small touches such as the gear selector and air vents rising when the car is turned on give an expensive feel. If I’m being picky, though, the infotainment system isn’t the most up-to-date, but a more advanced ‘InControl Touch Pro’ will be available as an option towards the end of the year. 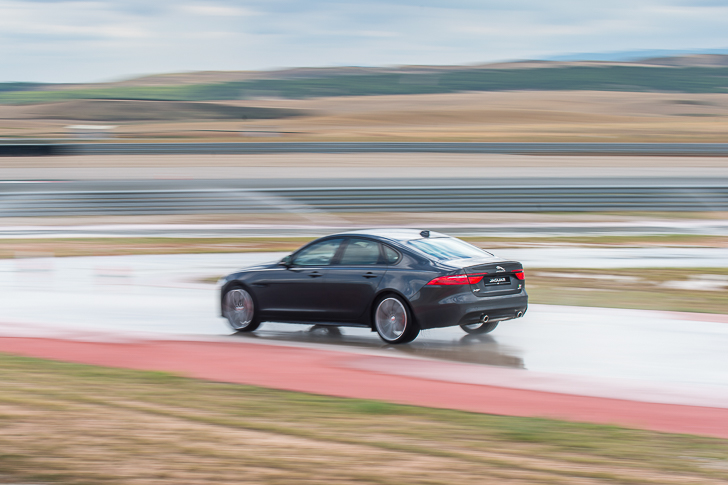 Behind the wheel of the twin vortex supercharged model, I ‘engaged’ Sport mode, which increases responsiveness of the throttle and steering, then promptly floored the gas. Lap one was mainly a taster to help me get up to speed, but I was still impressed with the amount of tyre squeal the Jaguar XF S managed to produce. The AWD train is chain driven, as opposed to gear, ultimately making it smaller, which contributes to its more slender redesign, making it 16 percent lighter, and 10 percent more efficient. The mid-sized saloon feels rear-wheel drive and, well,  fun like you could lose it any minute, only you don’t, and when pushed into a corner you just feel the front end gently bring you out of it. It’s an experience that keeps you on your toes in the safest possible way. Steering is weighty and responsive too; there is little in the way of understeer, through even the mightiest of sweeping high-speed bends.

After some dry action (keep it clean) we experienced the wet track and, again, the car impressed. Seriously impressed. I was very surprised at just how much trust I had in the car, even under the unpredictable conditions wet weather driving produces. Another couple of taster laps in the bag, I found myself pushing the car even more to try and ‘beat’ the technology, but the XF remained stable and superbly balanced through the corners. Granted, these are not adjectives you normally associate with ‘excitement’ but the drama was all in the challenge. Intelligent driveline dynamics and adaptive surface response technology (featured on all-wheel drive, allowing the car to determine what surface it’s on), coupled with torque vectoring by braking, which subtly brakes the inside of the wheel under load during cornering, all work together in harmony to give a very positive outcome. 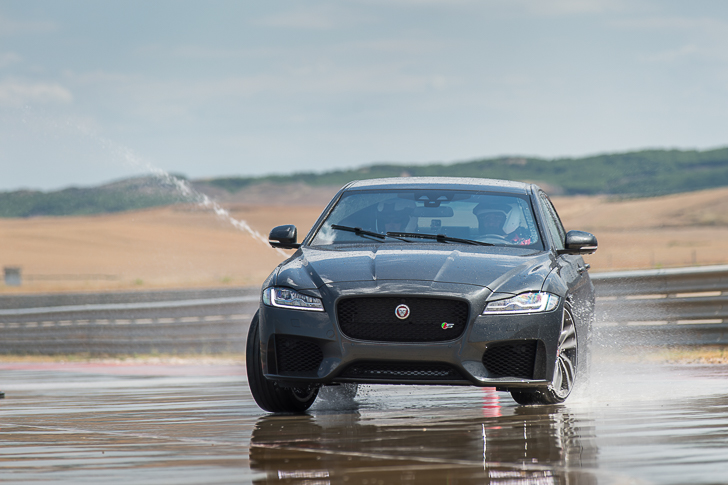 It wasn’t just track time I got to experience, though. I drove the rear wheel drive model with the same engine up the peak in Roncalia, Spain, through twisting roads and real-life hairpins; the kind you see in the movies. The car is good on track but that agility and poise doesn’t falter on the road either. It feels planted and agile on even the tightest of roads. Braking can be left that little bit later (dependent on how often you want to replace the pads) because you can point the car where you want it, confident you’re not going to get into trouble.

Driving the new Jaguar XF S doesn’t feel as if you’re driving a saloon at all. Jaguar has managed to make a big car drive and feel smaller than it is. It’s smooth, with seamless gear changes, but the power is practically instant and can be a little abrupt for what is, essentially, a business car. However, the ride and handling really are spot on: we thought the predecessor was good, but it’s improved ten fold and is a real pleasure to drive – comfortable but easily accessible fun when you want it. What’s not to love?

Did you enjoy our Jaguar XF S review? You can check out more test drives on crankandpiston.com HERE