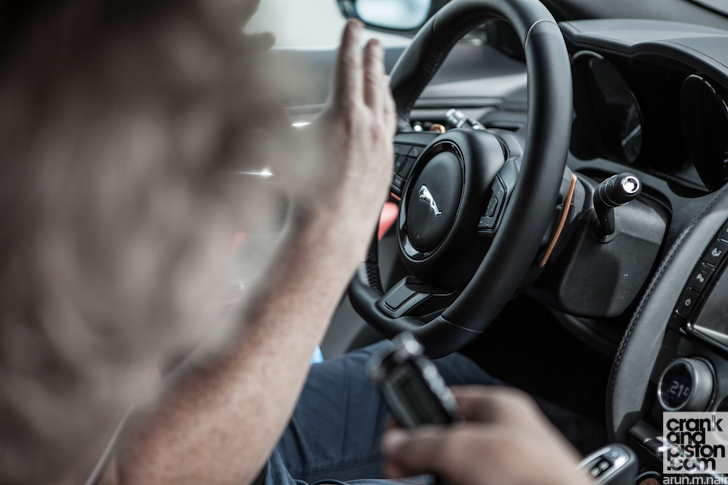 As well as monitoring every aspect of the car, it is also about monitoring the occupant. During these tests the cockpit area is also wired for, well, everything it would seem. From the drivers feet to the back of the stereo, temperatures are monitored. It is not all electric sensors and data logging devices though. Human feedback is relied upon as well.

“The job can be quite mundane at times,” says John, much to my disappointment. “We have to seek out heavy traffic and subject the F-Type to conditions that most people try their best to avoid. It is all-important to the development of the car process. Lots of data is being recorded to make sure the vehicles are performing as they should be. Unexpected brake squeal for instance; we run specific brake noise tests with in excess of 20,000 brake applications over a ten-day period in this market because of the environmental conditions that we experience. We don’t want a Jaguar customer reversing in to a car parking space and attracting the wrong sort of attention because the brakes are squealing.” 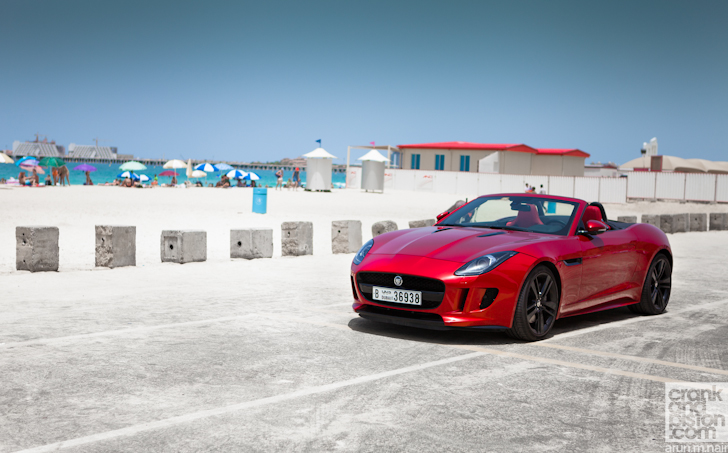 Several times John has mentioned how, during much of the testing with the F-Type, it is “beautifully frustrating”, because one cannot exploit the dynamics of the car or the drivetrain within the roads of Dubai. Traffic, speed cameras, straight roads and general fun spoilers get in the way.

That won’t do. This is crankandpiston.com. We want fun. So we get out of town.

Throughout the morning, John’s driving has been exemplary. I am not the best passenger in the world but John has me at ease. Always using correct signals, maintaining legal speed and constantly checking his surroundings. I find myself wondering if he is analysing some aspect of the car that I am unaware of. 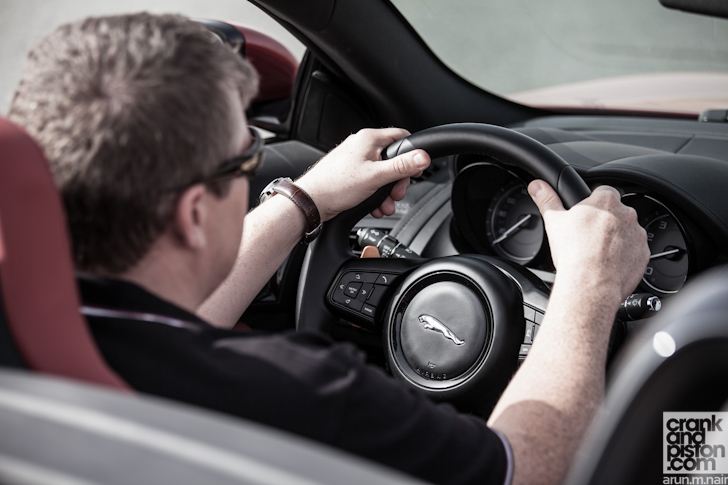 Once out of Dubai and in to the desert, John is relaxing a bit more in my company and is getting accustomed to me occasionally sticking my dictaphone under his nose. He is also clearly enjoying driving the F-Type much more on these roads. Perhaps Deira brings back bad memories of being stuck in an intentionally overheated car during air-conditioning pull down tests.

This is car that John has come to know very well. This particular F-Type has been in Dubai since January and by the end of its tour here, John and the team will have put between 80-100,000 kilometres on it. He opens up the taps a bit and the sound of the V6 in all its raspy glory fills the cabin.

These are the roads that the F-Type was built to live on. Desert dunes either side with the only other traffic being a flock of camels. John is still maintaining legal speeds but when the corners come he attacks them with confidence. 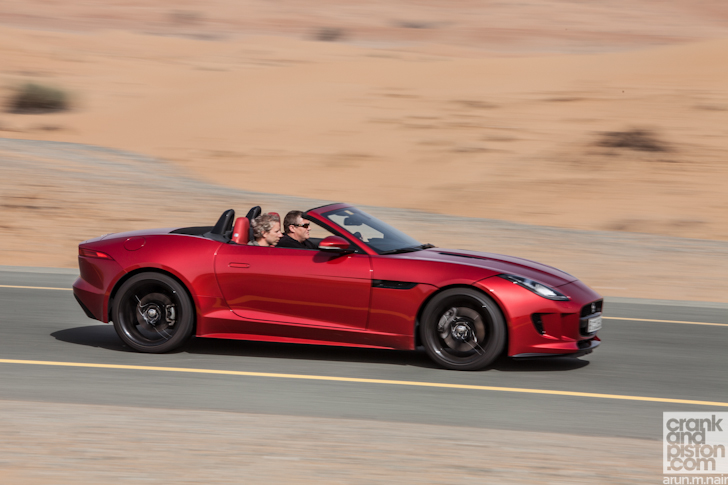 I have tried asking John nicely for the opportunity to drive the F-Type. I change to begging. I consider flirting but John looks like he packs a mean punch. I resort to bribery but John has the ability to say ‘no’ without moving his lips or even acknowledging me. John has been with JLR now for nearly 25 years. Damn him and his loyalty.

I can definitely see a little crease of a smile appearing on his face. John clearly likes his job and driving the F-Type so I push him for his personal opinion on the car. “In terms of a Jaguar product this has had massive amounts of testing and development. An incredible amount of man-hours have been put in to this. It is the first proper two seater roadster since the E-Type which many people still see as the most iconic of all Jaguar models.” 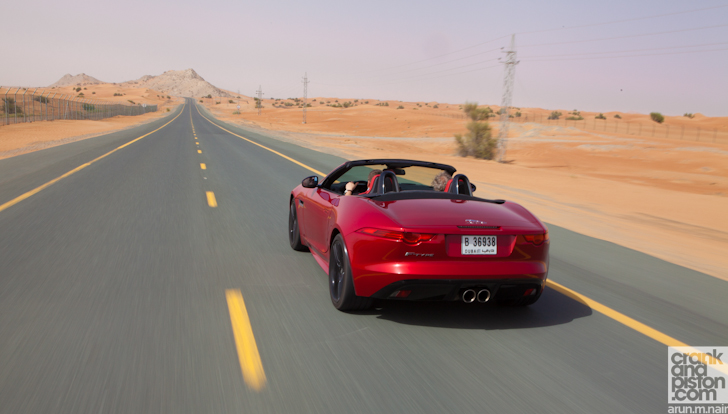 “I have been using this as my everyday car. Out shopping in it at the mall etc. That is part of the testing. It is also an opportunity to gauge public interest and there has been massive amounts of interest in the F-Type. I don’t think I have ever been photographed so many times before by the general public while I have been out testing a car. Dubai is a very car orientated city and people know what the F-Type is. They are well informed. The car is constantly being filmed and photographed and there has been a lot of interest in the vehicle that is for sure.”

I explain that this still sounds like a company line and, maybe pushing my luck a bit, ask a third time. John finally looks over and smirks.

“For me the greatest thing is the steering and dynamics of the car. It is just incredible. It is so direct, so planted. You feel so connected to the car. I also love the exhaust note of both the V6 but especially the V8 with its active exhaust. It is just a great driver’s car. This might sound a bit childish, but I love taking the F-Type through tunnels when the roof is down. It just sounds glorious.” 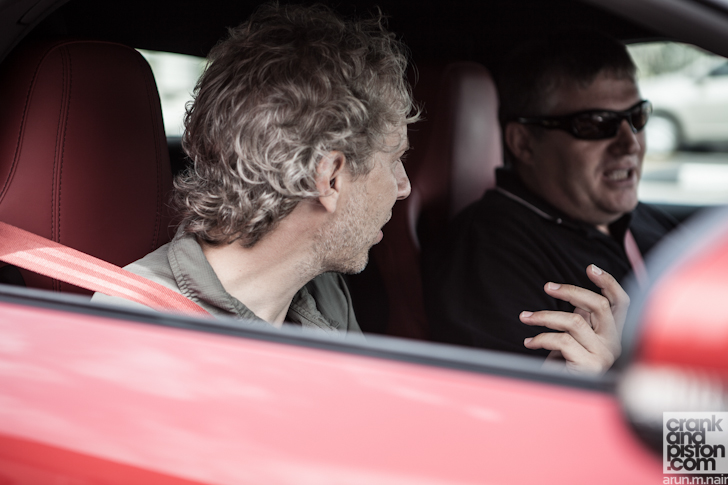 As we relax over a spot of lunch the conversation swings to how the public will perceive the car. The F-Type needs to be a success story for Jaguar. John is clearly confident it will be.

“There has been a lot of interest in the car and a lot of press exposure. Without doubt it has attracted more attention from the public than any other car I have tested. I get asked a lot of questions. When can we buy one? When will it be in market? Once people get an opportunity to drive one and see and feel the attributes of this car I have no doubt that people will be surprised just how special this car is.

“My personal opinion is that the F-Type will appeal to a wider public than perhaps some of the other models within the brand. It is still distinctly and 100 percent a Jaguar and therefore will more than satisfy the loyal Jaguar drivers. However, the F-Type has a sporting edge, it’s a real drivers car that has perhaps been missing from the line-up for a few years: genuine sporting credentials that will appeal to other buyers.” 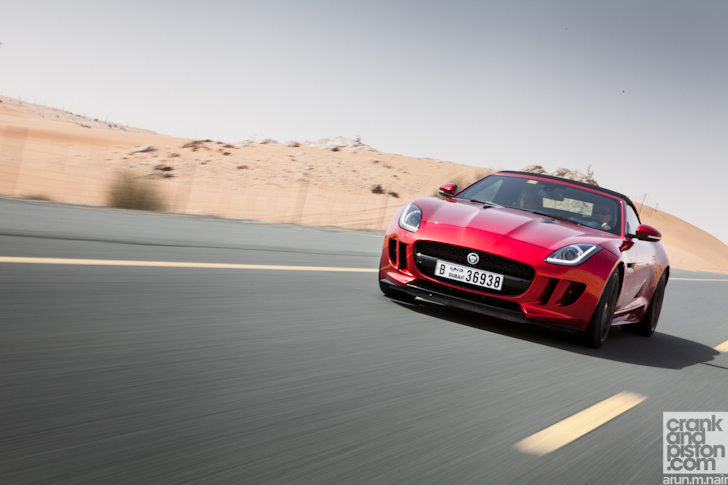 As a first taste of the F-Type pie, my appetite is most definitely whetted. It is an undeniably gorgeous looking car and the minimalist interior resists any gimmicky gadgetry. A modern take on classical beauty that, perhaps, will brighten up editor Bassam’s gloomy outlook on contemporary car design that he outlined in last month’s Ed Speak.

The proofing of the pudding will have to wait until I finally get behind the wheel in Spain just a week from when I write this. Above everything else, the Jaguar F-Type will be judged on how it drives, and after this thorough introduction, it’s the one box left to be ticked.