crankandpiston.com takes on the new Infiniti QX80 to find out if First Class, Every Day can be found in a premium SUV.

I can’t help thinking, as our convoy snakes its way down an Omani mountainside amidst a breath-taking sunset, that Infiniti has shot itself in the foot.

crankandpiston.com is here test driving the new QX80, the latest update of Infiniti’s largest Sport Utility Vehicle and the first since the company’s nomenclature overhaul nearly two years ago (the ‘56’ on the rear bumper has now changed to ‘80’ despite the 5.6-litre V8 still at work under the bonnet). A new model a new set of updates, largely cosmetic thanks to ‘more masculine’ chrome detailing and bodywork curvatures at the front. I’ll come back to that in a second though as it’s the marketing tagline that’s stopped me in my tracks. You see, with the new QX80 comes First Class, Every Day.

Now, when you consider the QX80 shares segment elbow room with the Mercedes-Benz GL 500, the Cadillac Escalade, the Lexus LX and (when it arrives) the long wheelbase Range Rover, it’s a hell of a claim, particularly since ‘first class’ traditionally brings to mind the Rolls-Royces, the Bentleys and perhaps the Maybachs of this world. Infiniti, premium as Nissan’s big brother is, rarely gets a look in. So what, pray tell, does the QX80 offer that is truly first class? 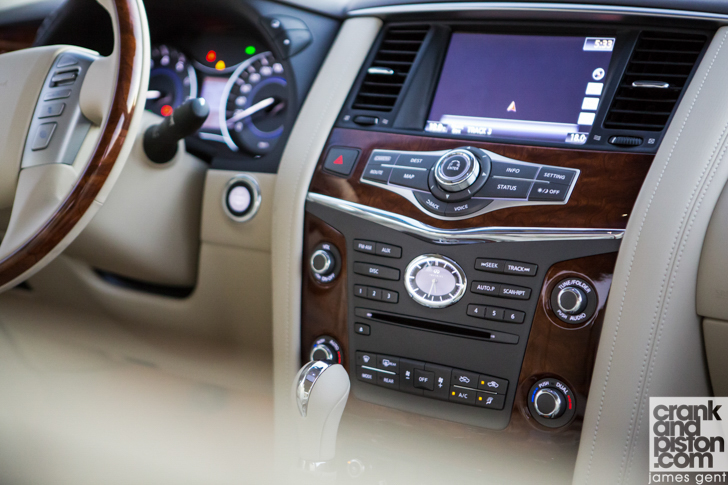 Let’s start with the cabin. Roomy certainly, with enough headroom to swing the proverbial deceased feline about with limited fuss. There’s a nicely laid out (if perhaps a tad cluttered) centre console, a cool box in the front arm rest, and entertainment options via the Tri-Zone Entertainment System, including the 7-inch screens mounted in the front headrests, wireless headphones and a Bose surround sound system. Further down this opulent route we find myriad driver assistance systems including Blind Spot Intervention, Intelligent Brake Assist, Lane Departure Warning, Adaptive Cruise Control, et cetera, etcetera. For luxuriating on the move, you’re pretty much covered. And yet there’s a snag.

It’s all nicely put together, but there’s nothing that screams ‘first class’. Headroom may be bountiful and segment-leading legroom in the second and third row seating is a plus, but things still feel a bit cramped in the front. My time off and on in the passenger seat is made more uncomfortable than necessary by the fire extinguisher mounted by my left foot, and the electric seat is not as adjustable as I’d like (oh to sit just a little lower and further back).

It’s a similar albeit inverted issue in the driver’s seat, limited reach on the steering arm necessitating I sit closer than ideal. And then there’s the seats themselves. There’s little in the way of lumbar support, Infiniti opting for a more sofa-like design than armchair. You can see the team’s reasoning – who wants to be gripped tightly every day in first class? – but some middle ground wouldn’t have gone amiss. As it is, I find myself gripping the handle above my head to make sure I don’t sluice off the seat through the corners. For the duration of our 600km journey. 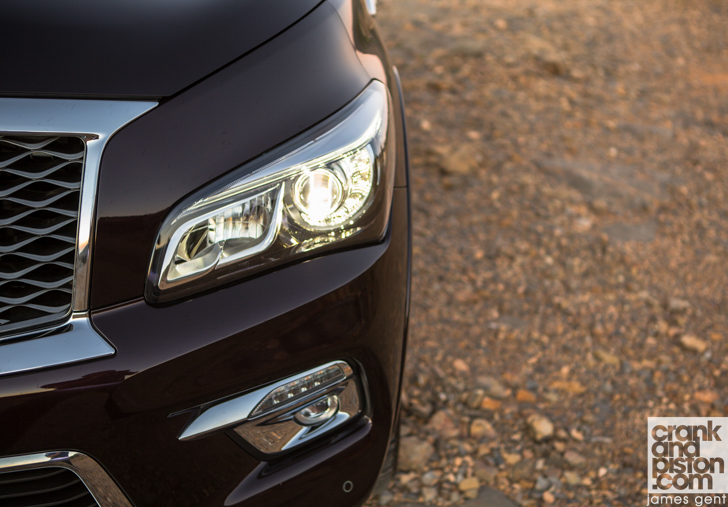 On the highway things don’t get much better. The 5.6-litre V8 produces 395bhp and 413lb ft, making it – as the company says – the most formidable engine on its books. In place of the twin-turbo V6 as found in the Q50 Eau Rouge, perhaps, but in a 2729kg SUV it’s simply too underpowered. Which is a shame, since the seven-speed gearbox handles our 600km very well, changes across the board very smooth with little in the way of electronic nannying.

Salvation for the QX80 however comes in the oddest of places: on a mountain road climb. That we have to select low range four-wheel drive to save the brake discs from overcooking on the way back down I’ll forgive, since because the Infiniti handles the turns better than it has any right to. The power-assisted steering may not have much feel (we’re back to the cogs and linkages as opposed to the steer-by-wire tech found in the Q50 S) but there’s a surprisingly amount of balance through even the sharpest turns.

Stiffened double wishbone suspension, plus a Hydraulic Body Motion Control – which distributes pressure to suspension arms under load – minimises lean considerably. In fact, there’s very little bodyroll at all. There’s still 2729kg of heft pushing the front wheels wide if you really punch on the loud pedal, but on these gradients and these sharp turns, the balance is such that I can get on the power sooner than expected and not be turfed out the window as a result. On the way back down, swift(ish) downshifts allow the V8 lump to take some strain off the brakes. The smoothness of this delivery and the ride comfort (there is incredibly little wind or road noise) is probably the closest we’ve come yet to First Class. 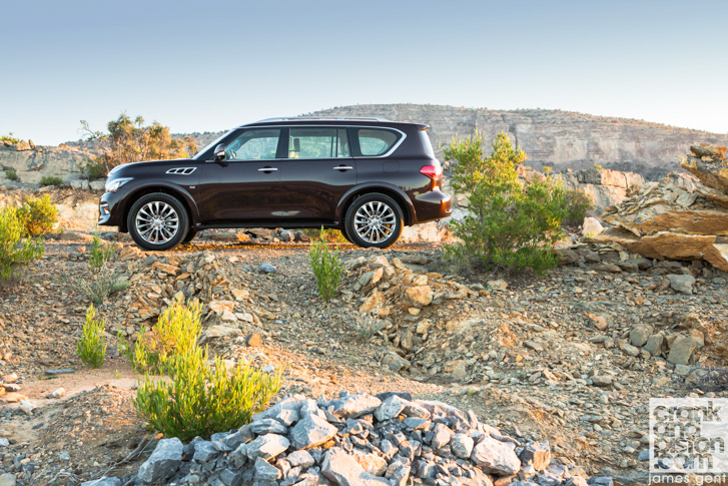 I do have to come back to the looks at some point though, even though I’m not particularly keen to do so. Masculinity is given a healthy dose of steroids via those enormous 22-inch wheels, mammoth (redesigned) front grille and whoppingly bulbous bonnet, all of which just highlight the QX’s presence nicely. So why, I wonder, has Infiniti gone the sleek and elegant route with the LED headlights? Against the curvaceous rolls of the bodywork and big-ness of everything, they just look, well, awkward, and an extension too far perhaps of the design DNA. It’s a pity, for in a segment rich with ‘aggressive’ styling, Infiniti almost pulled a fast one with the elegant QX80. Almost.

First Class then has proven a tough target to meet, despite Infiniti’s admirable attempts to do so. Normally such marketing semantics we ignore outright as waffle, but on this occasion the company has drawn an enormous bulls eye, one that’s difficult not to focus on. That the QX80 is premium there’s no doubt, with a nicely crafted and civilised cabin design, impressive comfort (save the seats), a bevvy of technical options and some impressive road holding. Even on our briefest of forays off-road across both wadis and sand, the newboy handles its terrain well, and one does wonder how the GL or the Escalade would do by comparison. Sure it’s of premium build, has presence and is comfortable.

But First Class, Every Day. I’m not so sure.