Infiniti’s newly face-lifted flagship SUV has been under the knife for some mild but welcome surgery. Is that enough, though, to maintain interest?

No, it’s not ‘all new’. The QX80, Infiniti’s flagship SUV, has nevertheless been treated to a mid-life overhaul – a refresh, if you will. Its platform is ‘borrowed’ from the Y62 Patrol of sister brand Nissan and has remained largely unchanged since the second generation QX80 debuted in 2010. The brakes, suspension, seven-speed gearbox and the 5.6-litre V8 also remain largely untouched, the latter still producing 395bhp and 413lb ft of torque. Even the dimensions stay the same.

Mercifully though, there have been changes to the styling. Let’s be clear, the outgoing QX80 was not a good-looking car. Yes, from the side and rear quarters it was big, brash and smacked of ‘presence’, particularly as the concave chrome detailing between the taillights drew unfortunate parallels with ED 209. But at the front, the bonnet was bulbous, the front bumper mounted air vent drooped almost comically, and the under-sized, inverted, low-mounted headlights looked, at best, ‘awkward’.

For 2018 it’s ‘all new’ (so to speak) from the A-pillar forwards, thanks to a redesign inspired by the recent QX80 Monograph concept. The headlights are now slimmer, more aggressively sculpted, and are mounted higher up the body. Infiniti has even included a strip of LED lights in the upper housing to create a ‘human eye’ complete with eyebrow. It sounds naff, but actually looks pretty good.

The front fender-mounted air vents are replaced with snazzier, ‘Flying B’-esque examples and when you combine that with a wider and taller double arch front grille, chiselled bonnet grooves and a more pronounced lower fascia complete with chrome detailing, it’s a significant improvement. The standard model comes with 20in alloys, but our well specified test model really rocks its ‘liquid metal’ 22s.

And that’s about it. There are wider side sills for alighting – the brute stands two metres tall with roof rails, after all – and inside there are some larger, higher resolution TV screens on the second row, as well as an updated infotainment system in the cabin that now features ‘Alexa’ voice commands. Unfortunately, it’s the cabin that also gets us pondering on why anyone would buy a QX80 in the first place.

It’s no secret that the Nissan-Renault alliance finds itself in an unenviable position with the Infiniti QX80. Yes, full-size SUVs currently account for half of the luxury car sales worldwide, and in 2016 the outgoing QX80 represented just under nine per cent of the company’s total sales at 20,708 units. Pushing the ‘luxury’ agenda then, on paper at least, makes fiscal sense: why else, after all, would customers be willing to fork over $65K upwards – or $80K, and change for the top spec model – for a QX80 when one of the region’s established darlings, the Nissan Patrol, could be theirs for a fraction of that cost, and at no real reduction in build quality or styling?

Of course, with a ‘luxury’ agenda in the full-size SUV segment comes benchmarks set by the Cadillac Escalade, the Mercedes-Benz GLS and Range Rover. Benchmarks the Infiniti QX80, unfortunately, cannot match.

The cabin of our test model – the $80,000 AWD Limited – is, admittedly, nicely put together with a genuinely solid selection of quality materials and good build quality. There’s a new digital Smart Rear View Mirror, which uses a rear-mounted camera to project a clearer image that’s surprisingly intuitive to use (I’d felt sure the slightly distorted image would drive me mad). There’s good news in that additional sound deadening has audibly softened road and wind noise, and across our test route, the supple double wishbone suspension produces a genuinely comfortable ride quality. This is aided by Infiniti’s updated Hydraulic Body Motion Control, which counter-balances the motion generated under cornering and significantly reins in body roll. Impressive, given that the QX80 weighs just under three tonnes.

There are some drawbacks though. The centre console for instance is festooned with buttons and rotary dials to the point that it both looks and feels cluttered. The driver information screen meanwhile feels dowdy, and the higher resolution screen for that updated infotainment system really is too small for a centre console of this size.

Then there are the close confines of the cabin itself. Headroom is bountiful, absolutely, and legroom across the second and even the third row, incredibly, are impressive. But in the front, the oversized transmission tunnel, jutting bulkhead in the footwell and oversized door handles teeter dangerously close to giving a feeling bordering on the claustrophobic. Even the runners for the electric seats are limited in reach.

Fortunately the drive offers some concessions. Like the ride, the gear changes are silky smooth, and while it can lose some juice between 3,000 and 4,500rpm, the engine has some decent bite off the line and at the top end, powering this 2,686kg hulk from standstill to 100kph in a respectable 7.5 seconds. There’s also a surprising amount of guts in the brakes, and while it’s power assisted to the point of lifelessness, manoeuvring the QX80 even at slow speeds won’t rip your arms from their sockets. As a drive, it is entirely unobtrusive, and that’s kind of what you want from a luxury SUV.

Another bright side is the cost. Yes, $80K for full bells and whistles is still a big lump of money, but it’s significantly less than a $95K top spec Cadillac Escalade or $103K base level Mercedes-Benz GLS or Range Rover.

Held back by its almost decade-old underpinnings, there’s only so long Infiniti can draw blood from this 2010 original. Yes, it’s comfortable, drives smoothly, and the front end re-design creates genuine ‘presence’, but the not-new, not-quite-luxury interior feels out-dated, the dual cockpits up front feel bizarrely tight for such a behemoth, and the overall experience lacks the spark offered ad hoc by Infiniti’s American and German rivals. Throw in the prestige of the now-premium Nissan Patrol – which regional customers continue to laud – and it makes Infiniti’s customer base for the QX80 all the more difficult to gauge. For Infiniti, the all-new model can’t come soon enough 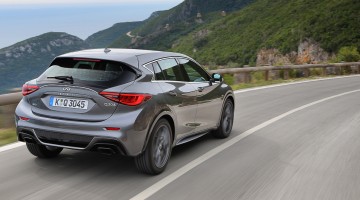