A hatchback Infiniti is something we’ve yet to see. Until now. crankandpiston.com test drives the new Infiniti Q30 on its international launch

The Infiniti Q30 was initially unveiled as a concept at the 2013 Frankfurt Motor Show. Now in its finished production form, the Japanese manufacturer ‘claims’ the Q30 is an introduction to a whole new segment, saying its design is an amalgamation of a hatchback and a crossover. But with an overall length of 4,425mm and height without roof rails at 1,475mm, the model is almost exactly the same size as the Mercedes GLA 45 AMG. So you’ll forgive my skepticism. Fortunately our drive on the international launch in Portugal offered more than just a questionable market placement.

Let’s start with the looks. It’s a design reminiscent of the concept unveiled two years ago thanks to the ‘Infiniti face’ at the front and some sharp-looking alloy wheels. The rear may not be to everyone’s tastes, the Sport-design diffuser and thin-strip taillights more ‘Volvo’ than premium, but the concave C-pillars do draw the eye. The Q30 would be easier on the eye if it wasn’t for the bodylines down the sides, the rear door handles in particular look more awkward than stylish. Another thing to note is the bonnet, which seems very high, thus making the car feel bigger than it is – which could pose a problem for those who find it difficult to judge how wide their car is. Still, for Infiniti’s introduction to a brand new segment, it’s certainly a strong look. 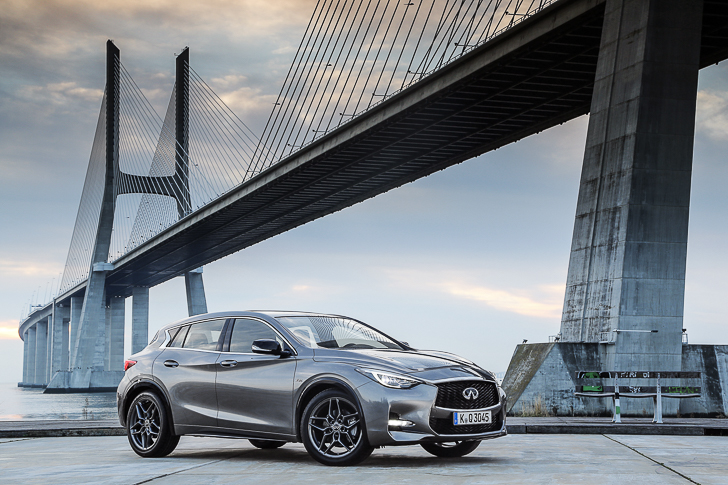 Off to a good start with the looks

Infiniti has tried to establish itself as the alternative luxury go-to brand, which continues to be a work in progress. However, you can really feel the luxury intent Infiniti has gone for with the cabin. The materials used throughout are of premium quality, with its Alcantara and quality leather finish. Even the plastics look good. The optional Sport seats in our test model offer good support too, the only slight downside being the interface technology, which can be a bit awkward to use. And if we’re being really picky – which, this being crankandpiston.com, we’re kind of obliged to be – the overall centre console design will look familiar to Q50 owners, and as such, is beginning to look a little dated. Upon getting into the car, its layout is functional and the driving position is good, but the cabin space feels a little compact for the driver. Thankfully I’m only small, but those who are slightly bulkier may get irritated with it.

The looks may have divided opinion, but fortunately the Infiniti Q30 more than makes up for it by the way it drives. Rather than going the hot-hatch route first time out the box, Infiniti has opted for a more refined approach, a decision that really pays dividends on the uneven Lisbon roads that make up our test route. The model really owns the comfort game: I’m almost in shock at how smooth the car rides and at the distinct lack of road and wind noise eking into the cabin at a cruise. Given the price, the luxury elements are pretty impressive. 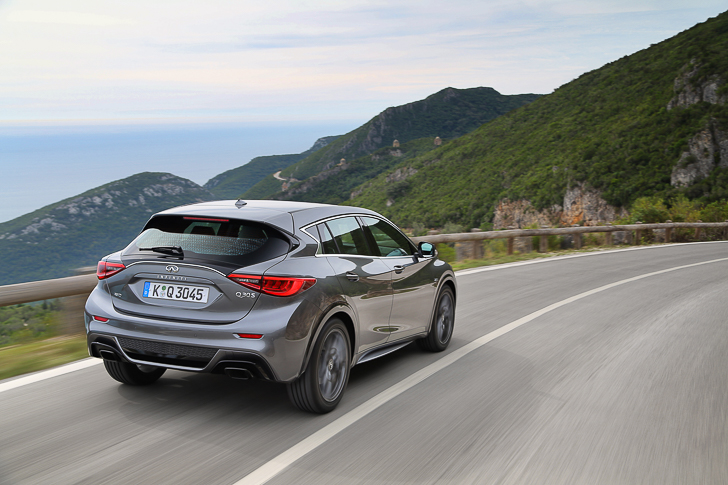 It doesn’t lack poke, either. The 2-litre turbocharged four-cylinder under the bonnet produces 208bhp – hardly shabby for a premium hatchback – and is mated to Infiniti‘s seven-speed dual-clutch gearbox, which is genuinely one of the smoothest I’ve come across. Changes through the box are, there’s no other way to put it, flawless, there are no signs of lag or jerkiness to disrupt that superb ride comfort. In much the same way, acceleration from that turbocharged four-cylinder is beautifully smooth and equally as spritely: it may not scream excitement, but you’d be surprised at just how effective pick-up is across the board.

This smooth style also translates well to the handing. Understeer on the road is minimal – as a hatchback crossover. It has thankfully taken its driving charm from the hatchback side, and as a result, the low centre of gravity and strong road holding from that supple suspension setup means there’s a surprising amount of poise through the corners. Throwing the ‘premium’ Q30 into an apex seems a bit of a misnomer but rest assured, good balance and solid feedback through the wheel is there should you decide to do so. Indeed, weighty steering might have threatened the overall comfort of the vehicle, though Infiniti has found the balance well. 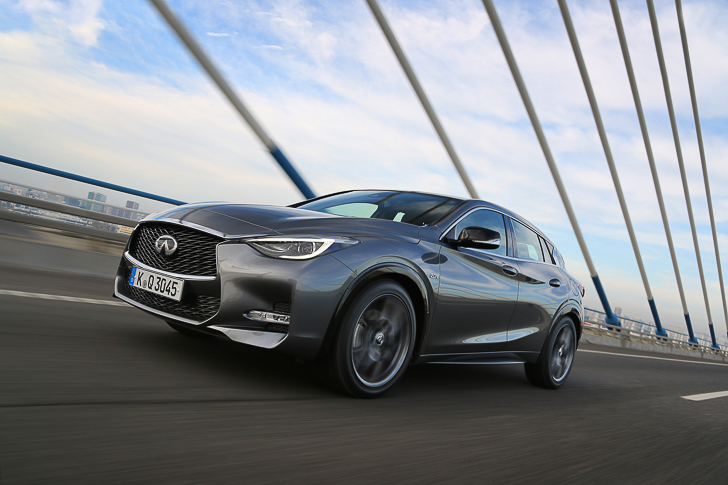 What’s the overall verdict then?

The Q30 then may not have got off to the best of starts in terms of overall looks or cabin practicality, but fortunately Infiniti’s newbie more than makes up for this on the move. Strong steering feedback and pokey acceleration is there in the hatchback, but it’s a peppiness completely overshadowed by the comfort of the drive. Indeed, it’s quite possibly the most impressive I’ve come across for a small car, thanks to the suspension ironing out pocked road surfaces, good sound insulation in the cabin and superb give in the seats. If a pleasant drive with excellent handling is up there on the tick list, the new Infiniti Q30 is definitely one to consider. Regardless of where it fits in the market.