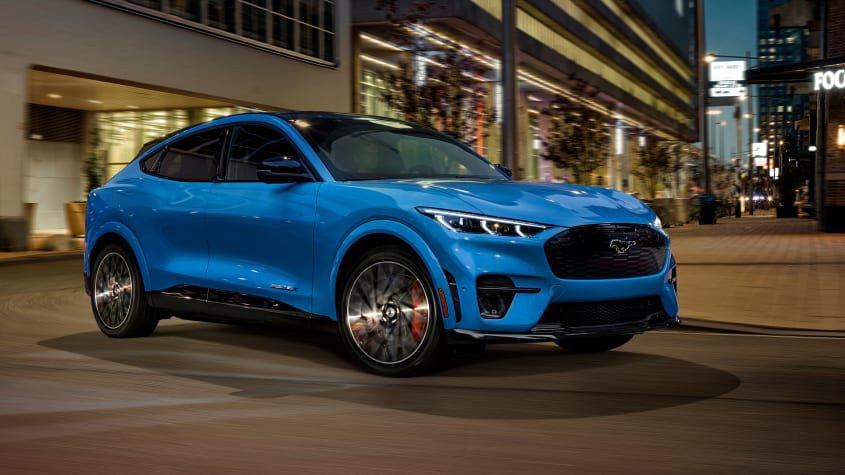 The Ford Mustang Mach-E made its debut in February yet despite promising EV stats its performance, or rather lack of, has yet to really live up to the Mustang name. Ford is hoping to address this with a new high performance variant of its first bespoke EV called the Mach-E GT though, uprating both its performance and looks.

Making its European debut last week in the Netherlands, the model pairs an 88kWh battery with an electric motor on each axle for a combined output of 459bhp and 612lb ft of torque. This is significantly more than the most powerful Mach-E so far which produces a more demure 332bhp and 429lb ft for reference, and is more powerful than an actual Mustang GT, which produces 444bhp from its 5-litre V8. Against rivals like the new Tesla Model Y Performance power is almost identical, but the Mach-E wins out on paper with an additional 112lb ft of torque.

As you’d expect from an all-wheel drive, all-electric car acceleration is brisk – 3.7sec is enough to cover the 0-100kph sprint, 1.4sec quicker than the ordinary Mach-E AWD. Top speed is a somewhat low for its class at 200kph, 20kph quicker than its standard siblings, but the range-topping Model Y goes on to a top speed of 250kph.

Due to its heightened performance and slightly smaller battery pack, the Mach-E GT’s range is rated at 500 kilometers (WLTP) on single charge, sacrificing 40 kilometers over the standard Mach-E AWD and 111 kilometers RWD variants fitted with the extended 99kWh battery.

The Mach-E doesn’t just bring extra performance to the package though, as it will also feature a host of extra kit as standard including Ford’s MagneRide adaptive suspension, larger 20” wheels, Ford Performance seats and exclusive colours including Grabber Blue and Cyber Orange.

Styling changes are subtle, however the use of a grille more traditional in appearance bridges the visual gap between it and the Mustang Coupe, as well as allowing for larger air intakes to keep that uprated powertrain cool.

Pricing for the standard Mach-E will start at $52,123, rising to $59,000 for the AWD variant, but we expect the GT to cost from around $77,000 to match Jaguar’s recently updated I-Pace and the upcoming Tesla Model Y Performance when it goes on sale locally in late 2021.