Following the launch of the new 488 GTB, crankandpiston revisits another eyebrow-raising Ferrari. But for entirely different reasons…

The FF is a revolution in the land of the Prancing Horse. It’s got four-wheel drive. It’s got a big boot. It’s got useable rear seats. Surely it’s not a ‘proper’ Ferrari? And yet, it’s got a shedload of fancy F1-derived technology, 652bhp and is mind-numbingly fast. I’m confused.

The FF is the nominal replacement for the 612 Scaglietti, namely a grand tourer coupe that can take occupants and at least a bit of luggage across continents at speed while still giving that quintessential Ferrari experience of luxury, razor sharp handling and a glorious soundtrack. But when the covers came off this new car, sharp breaths were taken. It looks like a shooting brake-cum-estate car. And four-wheel drive? In a Ferrari? Had Maranello gone stark raving mad? Far from it, the Italians assured us. This was the car that Ferrari customers had been demanding for some time. They wanted a Ferrari that they could drive in snow or mud, that could fit more than a briefcase in and perhaps a couple of kids. And so here it is. 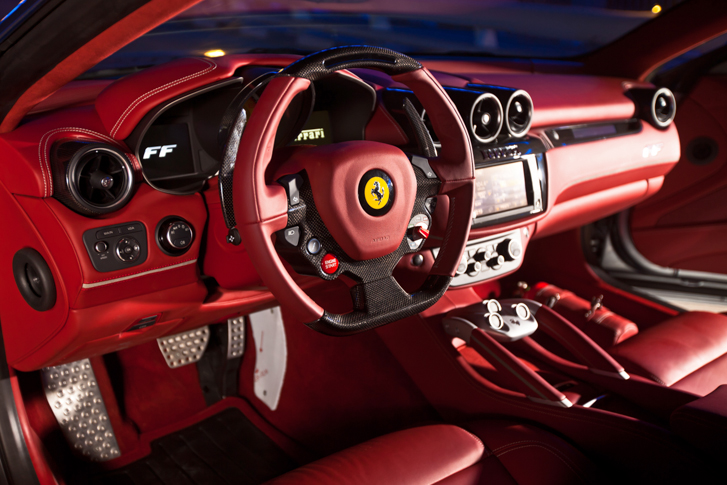 Opinion at crankandpiston.com is divided over the looks – our man Bassam considers it a personal affront, whereas I rather like it in a modern, almost Japanese anime-inspired way. The shooting brake profile works well, and I like the manic grin up front. It’s considerably bigger in the raw than I expected, however. Be very careful when parking it. Inside, it’s familiar Ferrari territory with leather and carbon everywhere and the now-familiar F1-inspired steering wheel, adorned with every control you need – no stalks here. The driving position is, as one would expect, excellent. So far, so good.

A twist of the key, a stab of the start button, and the big 6.3-litre V12 whirrs into life. It’s more muted than the 458 but still loud and full of passion. Get on the road and marvel at the speed of the gearbox. All seven cogs are shifted in literally the blink of an eye. It’s superb, both in auto mode and using the wheel-mounted paddles.

Then, when you’re done marvelling, put your foot down and hold on. 652bhp is a lot in any car, and boy can the FF move. 100kph comes up in 3.7 seconds, but it’s curiously linear and non-dramatic in its delivery. You know you’re going fast, but you’re admiring the speed rather than freaking out about the onrushing horizon. It’s somehow less visceral than the likes of the 458 Italia. Which I suppose, given the FF’s remit, is the idea. The same is true when hammering through bends. The steering is fast, light but accurate, the nose willing and agile and body control superb. The FF darts between apexes and deep reserves of torque from the V12 let you make up ground on virtually everything. There’s isn’t that raw appeal of the most focused of Ferrari’s though. The speed is definitely there, but it’s as if the experience has been turned down from 11 to maybe 7 or 8. 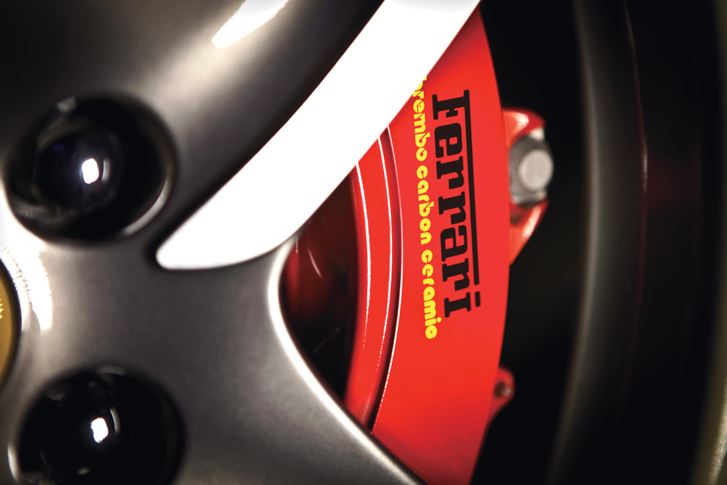 Now, that four-wheel drive system. It’s not your regular propshaft-and-away affair – that would be too heavy. Instead, Ferrari has come up with something new, involving a second gearbox below the engine. The FF is essentially rear-wheel drive until the car’s brain detects slip, and then it sends power to the front.

The net result is monumental traction on the dry roads around the Middle East. Having recently driven the 458 Italia again, I revelled in its ability to waggle the back end around at will and with consummate ease. The exact opposite is true in the FF. Pitch it into a corner and get on the gas early and it simply hooks up and goes. Throw it in harder and the same thing happens. In the absence of a section of runway to absolutely banzai it in sideways, I didn’t manage to get the back out at all, even with the manettino set to Ludicrous. Which, on almost full lock and with 660bhp, is quite remarkable. It’s understandable I suppose – if the car’s designed to be loaded with a weekend’s worth of suitcases and small children, you probably don’t want it to break loose too much. 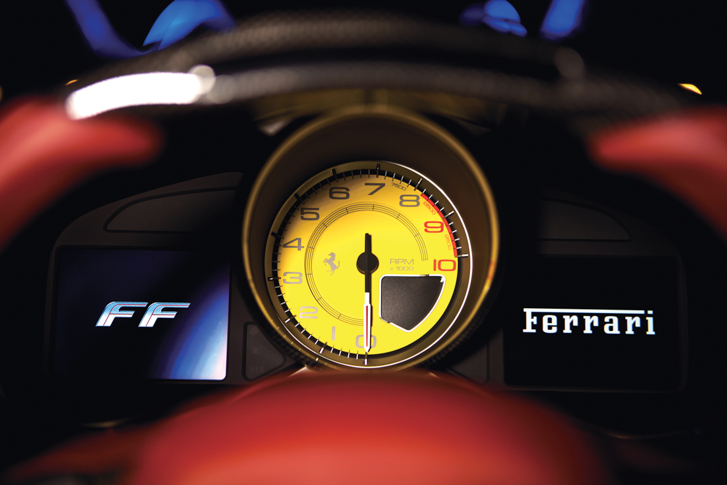 Ah yes, the practicality. It’s undoubtedly more practical than the Ferrari sportscars, and the back seats are certainly capable of housing a couple of toddlers. However, six-foot me wouldn’t fancy being in the back for any longer than 10 minutes, and while the boot is an acceptable size, our test car came with a spare alloy in a bag crammed in there, which took over more than half of the available space. So for your weekend jaunt across Europe, you have a choice – have clothes to wear, or have a way of continuing if you get a flat. Hmmm.

And then there’s the price. There’s no getting away from it, it’s $321,271. Which is a huge amount of money. Is the FF a proper Ferrari? Undoubtedly – it’s a technical masterpiece and stupendously velocitous. On the other hand, it’s not as exciting as some other models, and not as practical as cars a fraction of its price. But if you’re a Ferrari customer and have your heart set on using one everyday, then get your chequebook out.

Previous ArticleAlpina B6. REVIEW. Dubai, UAE
Next Article Behind the scenes with GMC Acadia