Behind the scenes with GMC Acadia

I feel it’s important to be honest here: the GMC Acadia is not particularly interesting. And before the GM execs amongst you start hounding for my resignation, let me explain.

Recently crankandpiston.com pitted the new Cadillac Escalade against our Management Fleet alumni, the Mercedes-Benz GL 500 (the results of which you can read HERE). When dealing with headline models such as these, it’s important for a camera car to provide enough practicality to transport digital and photographer crew – plus equipment – easily, the utility for those all-important motion shots, and just enough grunt to keep the main protagonists honest. All whilst staying nice and sedate in the background. The Acadia ticks off these boxes nicely.

Still in its first generation, the Acadia shares the same platform as the Traverse and Enclave from sister manufacturers Chevrolet and Buick, the only difference being its more premium build quality. Our test model is also the Denali edition, shorthand for ‘honeycomb front grille, 20-inch wheels and integrated chrome exhaust tips’. Unlike its more agricultural brethren the Acadia also offers leather seats (three full rows of them), which despite lacking a little in support through the corners are easily comfortable enough for an eight or nine hour shoot.

There’s other neat touches too like the Denali-exclusive wooden accented steering wheel, a head-up display and seat coolers, and even though the centre console may look a little outdated, it’s been solidly and intelligently put together: controls for the audio system in the boot may seem like GMC engineers were off their nut at the design easel, but prove rather handy if you’re sitting on the tailgate and have to change stations. Ride comfort, as you would expect from a Denali, is silky smooth, and although a little extra legroom in the captains chairs on point wouldn’t go amiss, little intrusive road noise in the cabin means the ride is pretty civilised. Give or take the occasional flaw. Range from the steering column is good, unless you’re six-foot tall, in which case rake could be better. 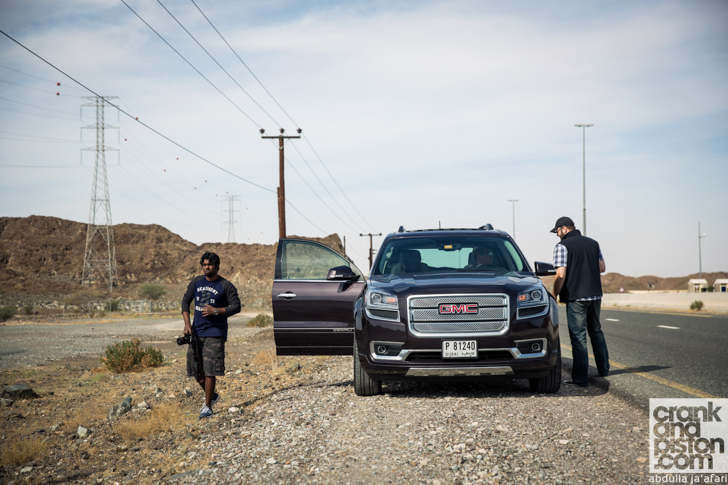 It also has to be said that, though this facelift is two years old, the Acadia’s look is a good one. The enormous front grille doesn’t overpower the front end as you might think, and the oh-so-close-to-being-blingtastic chrome detailing just skims the surface of loutish. Each to their own of course but, coupled with the low stance and bulky bonnet grooves, the Acadia a good-looking animal.

It’s about here though that my enthusiasm starts to tail off. It’s not that the Acadia is a bad car to drive: this is an SUV not a sports coupe, so a degree of leeway is required. It’s just a little…numb.

Take the 3.6-litre V6 engine for instance which offers 284bhp of decent pull with little loss of momentum through the range, thanks largely to 270lb ft of torque. Smooth changes from the six-speed automatic gearbox help nicely in this endeavour too. There’s no getting away from the all-wheel drive model’s 2200kg kerb weight though. We’re not looking for blistering 0-100kph runs (again, SUV), but more guts from the V6 would inject some much needed joie de vivre.

It’s a similar situation with the steering. SUV handling is rarely scintillating, but even so, there’s just enough weight and precision through the steering to trick you (almost) into thinking the Acadia can manhandle the corners. Which it can. For an SUV. But that’s about it, the handling neither exciting nor sphincter shrivellingly awful enough to warrant strong feelings either way. Which is a little unfair, since soft suspension for greater road comfort doesn’t dint the fact that body roll and understeer are surprisingly good. 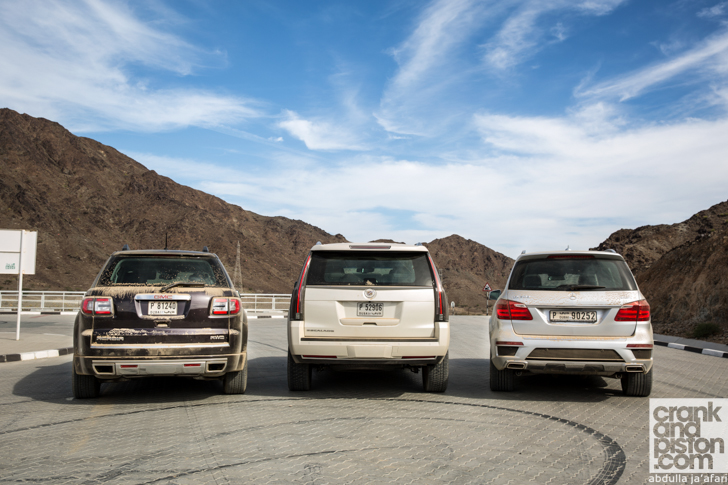 From a driving side then the Acadia does leave me a little cold, which is a shame – and a little unfair, since there isn’t a whole lot wrong with it. The looks too are a plus, the practicality difficult to argue with, and a degree of comfort found in very few segment rivals are reasons enough to make you consider the list price. Indeed, to question the drivability of an SUV – hardly the element where we find ‘the thrill of driving’ may seem crass at best.

But I can’t honestly say the GMC Acadia left me beaming. It simply went about its business, remaining in the shadows while the stars – the Escalade and the GL 500 – nabbed the attention. Which is exactly what you want from a camera car.