crankandpiston.com welcomes a newboy to The Management Fleet in the shape of the Nissan 370Z GT Edition

Back in 2008 the 350Z was still up for grabs, it delivered crazy numbers in terms of sales, with almost 162,000 models selling in the USA alone. Since then its proven something of a phenomena – and a fanboy favourite – on-track and in the world of tuning. It wasn’t too surprising then when, in 2009, Nissan made a new Z boasting a bigger displacement engine and completely different ‘racey’ suspension/chassis setup, all while keeping the original 350Z ‘character’ intact.

The then-new 370Z proved particularly popular in my native Jordan (or would have done if the import tax wasn’t so ridiculously high), where affordable, rear wheel drive cars that are easy to customize and take on-track without embarrassing themselves are always top of the shopping list for petrolheads.

So when Nissan Middle East was kind enough to lend us one for three months, we didn’t have to consider our answer for long. 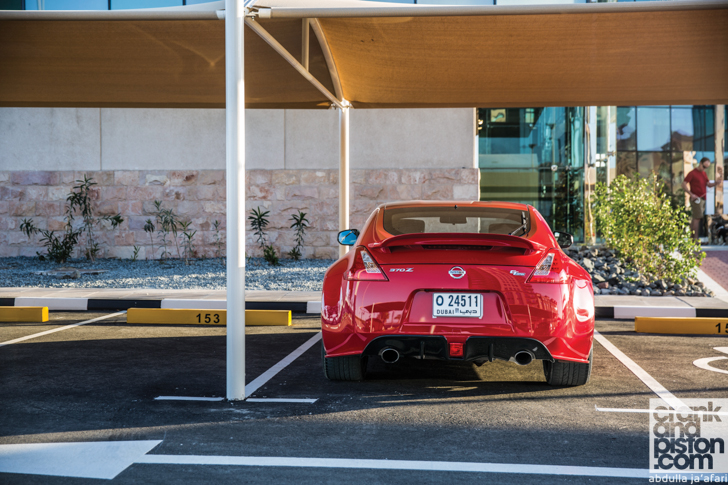 Nor I for that matter, since the 370Z has been top of my personal bucket list for some time. That I have the opportunity over the next few months to give our new long termer the beans will determine whether or not I actually buy one. And, from the looks alone, we’re off to a good start.

Our ‘new’ boy (it’s actually a 2013 model) is the GT Edition, the result of a collaboration between CarbonSignal and Nissan (much like THIS widebody) boasting new side skirts, front and rear lips, rear spoiler and side stripes. Said bodykit is limited to Nissan dealers in the Gulf region, making it that much more exclusive (and the keys, consequently, that much more sought after in the crankandpiston oval office). As an overall look, it’s a striking one, the more aggressive ‘tuner’ look one I tend to gravitate towards.

In fact there are a couple of track days coming up at which we could stretch the 370Z’s legs. Fingers crossed we get the green light
for that…

Previous ArticleBehind the scenes with GMC Acadia
Next Article Alpina B6. Dubai