Sliding into the targa proves much easier than I’d imagined, the seats offering ample give, and the footwell surprisingly spacious (the bulkhead on the 488 angles my left foot towards the centre console). At over six-feet tall though, I’m secretly relieved that Aziz couldn’t track down a GTB before landing the GTS: there’s only so far back on the runners I can move the driver’s seat, so there’s precious little room between the rim of the wheel and my legs, not to mention the top of my skull and where the roof would be were it not stowed. It’s a comfortable setup though. Immensely comfortable, in fact thanks to these leather seats, and one heavily revised for 1985 over the 308 with revised door pulls, better quality upholstery stitching and more modern switchgear. Aziz meanwhile is clearly keen to see the 328 underway, pulling alongside in the 488 and offering one of the largest thumbs up I’ve ever seen. Engine fired, first gear selected on the short-throw five-speed manual, and the biting point found, we’re away…

To knock the performance of the 3.2-litre V8 would be to do it a massive disservice. While 270bhp may seem a pittance by today’s standards, those 3185 cubic cylinders still offer some superbly gutsy acceleration, a momentary lag in the lower revs giving way to more progressive thrust. It’s a while before I feel brave enough to put my foot down completely, but even at just-over-half-throttle, there’s plenty of oomph, that 80s soundtrack (the V8, not Belinda) I had earlier knocked raising a booming octave and entrancing the whole experience: sweet Lord, even with the 488 V8 screaming away in the distance, it’s a superb noise.

A nicely weighted clutch pedal aids my re-acquitance with a manual transmission, each deliberate gearchange accompanied by a delicate ‘ker-click’ of the gated shifter. I had worried that the dogleg first gear would scupper me at first, but after only a few minutes, I’m barely aware of the unorthodox layout. It even starts to feel, well, natural, a far cry from the imperceptibly quick changes through the 488’s F1 dual-clutch seven-speed Aziz is currently mastering. There the technical wizardry beneath the surface doing most of the work for me had inspired only awe. Further back in the 28-year old veteran, I’m being made to work on this drive. 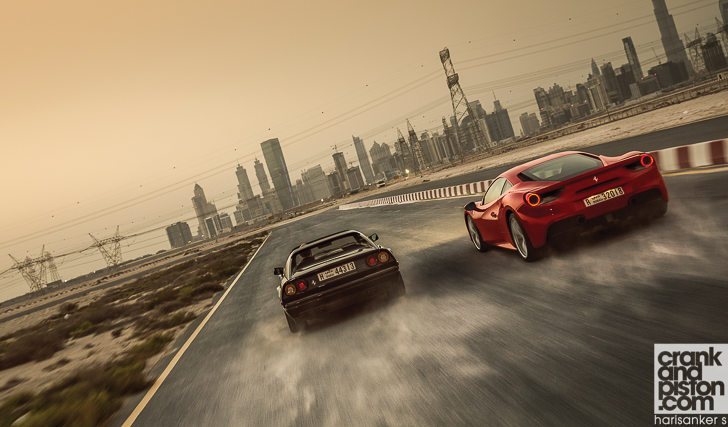 If I’m being honest though, most of my attention is on the steering. I’ve grown so used to the rapid rate in the 488 and the knife-like manoeuvrability of the nose that the power-assisted-less steering in the 328 catches me completely off guard. There’s a finite amount of play in the wheel. Not an enormous amount, but just enough to keep me on my toes as I start feeding power in through the turns. More inputs are required with varying degrees of force, depending on the speed, and I find I’m having to feather the throttle more and more to keep the front end settled through the higher speed turns. There isn’t the sense that the nose will understeer off the road, but there’s a wonderful sense of achievement as I work harder than I expected to place the Ferrari where I need it.

The position of my legs mean that feeding the wheel through my hands is my only option, and as a result I’m thinking ahead of the corners more-so than in the 488, where steering inputs are almost instinctive. I can also feel the 328 moving underneath me as I begin to put the power down, the wind belting me in the forehead and that naturally aspirated V8 rising in timbre all the while. In tandem with a comfortable ride, marvellously exciting steering and retro gearshifting, reminds me more of a time since past than the future ahead. I’ll admit, I’m actually getting misty-eyed.

“270bhp may seem a pittance by today’s standards, but those 3185 cubic cylinders still offer some superbly gutsy acceleration”

Suddenly I’m more aware of how great my input is at the wheel, how critical my gear changes are, the finesse required to balance that heavy clutch pedal, and how simply planting my right foot will unsettle the balance with potentially disastrous results. There’s a connection to the drive, a greater sense of engagement, a greater sense of achievement from cruising at 60kph than hitting triple digits in the 488, and it’s proving difficult to hide my enthusiasm from the rest of the crew when I finally pull in. I have a smile on my face that threatens to crack my lower jaw in half – “I’ve never seen you this happy”, chief photographer Arun mentions – and there’s a pat on the small of my back as Aziz strides up next to me and sums up the drive in just three words: “Told you. Romance” 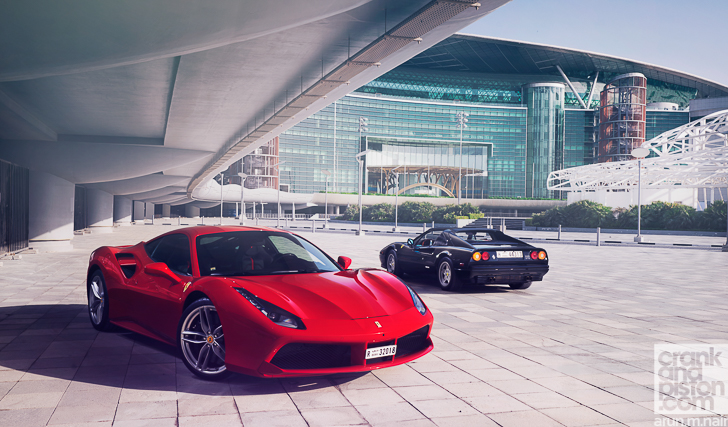 Every so often at crankandpiston.com, with deadlines looming and the occasional all-nighter pulled to make sure a feature has been completed, I can forget that this is easily the best job I’ve ever had. Not today. To my left stands the new 488 GTB Ferrari, technically brilliant and mesmeric through the turns. To my right, a pristine 328 GTS generously loaned by a fellow car enthusiast keen to share his unbridled passion for not only his car but a motoring era now extinct. And it’s hard not to feel inspired by both. The 488 GTB is a masterpiece, turbocharged V8 or otherwise, and fears that it would not ‘feel’ like a true prancing horse is an argument that’s gone up in flames: it’s outstanding, full stop. But then there’s the 328 GTS, a model that reminds me of the passion and the engagement that made Ferrari what it is.

The future may be fascinating and exciting, but the past is what really plucks at my heartstrings, and were you to ask me in six months about the 488 and the 328, I know which I’d take for another spin with Belinda Carlisle.