There’s little question that the new turbocharged Ferrari 488 GTB is utterly brilliant. But does it maintain the V8 Ferrari’s storied lineage? We find out with the help of an ‘87 328 GTS 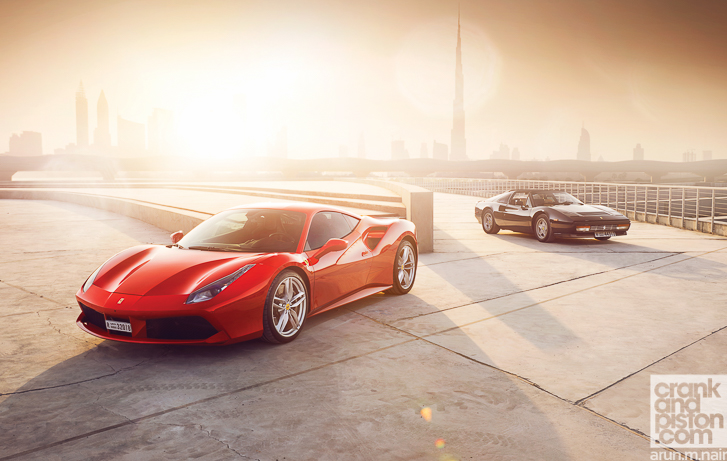 The ‘controversy’ surrounding Ferrari’s latest tier-topper has, I’m sure you’ll agree, been covered exhaustively. Maranello’s established 4.5-litre naturally aspirated V8 has been ripped from its mountings, its place taken (shock, gasp, horror) by a downsized 3.9-litre V8 with twin turbochargers. ‘Could it be? cried the automotive world, ‘has Ferrari gone Faust and sold its soul to the devil?’ Kinda, yeah, but then those C02 emissions have to come down one way or the other…

There are numerous benefits to such ‘betrayal’ though, namely power and eye-watering levels of it. The 458 Italia barely hidden beneath the 488’s new look boasts 562bhp, the more hardcore Speciale 597bhp, while the 488 tops the former by almost 100bhp at 661bhp. Variable torque maps mean 560lb ft, like the California T that begat the engine, is available only in seventh gear allowing for shorter gear ratios and thus more lunatic bursts of acceleration at the top end without barbequing the rear rubber in the process. Revised magnetic dampers ensure tighter body control through the corners over the 458 Italia. Side Slip Control 2, as found in the Speciale, takes into account speed, steering angle and other bits and bobs to determine just the right amount of ‘slip’ from the rear wheels for maximum lateral grip. Revised aerodynamics mean greater downforce and reduced drag. Forget the customary ‘is it or isn’t it brilliant?’ dance, the 488 is clearly both technically – and absolutely – awesome.

But does my heart agree? Does the introduction of a new, technologically spectacular turbocharged supercar mark a new golden era for Ferrari, or has the heart and ‘soul’ so indicative of the brand slipped through the cracks? 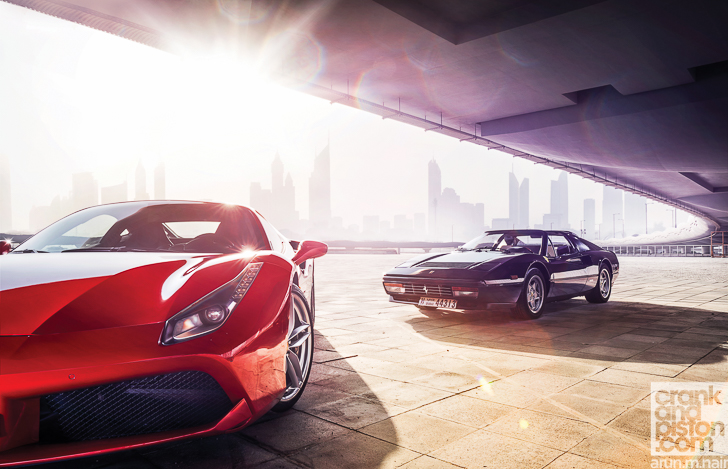 Step forward Aziz and his 1987-vintage 328 GTS, the successor to Ferrari’s iconic 308 GTB. Rolled out before a baying public at the 1985 Frankfurt Motor Show, both the 328 GTS and its hardtop GTB counterpart marked the first heavy revisions to the 308’s DNA for eight years. The Pininfarina styling for starters received a nip and tuck: gone were the air intakes behind the pop-up headlights in favour of a more rounded nose and a softening of the wedge profile. Unlike today’s affinity with downsizing, underneath lay essentially the same V8 that powered the 308, albeit one larger in capacity. Said 3.2-litre V8 (just in case you were wondering where the ‘328’ name came from) produced 270bhp and 224lb ft of torque, meaning 100kph could be achieved in just over six seconds and it would hit a top speed of 263kph. By 1980s standards, it was pretty sprightly.

It was also immensely popular with up to 6068 examples being produced during the 328’s four-year run, the GTS outnumbering GTB production by almost five to one. Understandably, with Pininfarina-approved bodywork, the character almost tangibly produced by THAT 3185cc engine and a sporty persona undercut by the romance of a targa top, the 328 GTS has since become one of Ferrari’s most desirable models. Admittedly the 308’s Magnum P.I. phase probably helped…

“It’s all about power today,” owner Aziz mentions. “Power and speed. Okay, great, but it’s not the same. It’s like playing a Gameboy. This is an experience. It’s a lifestyle. You really feel like you are one with this car.”

“Has Ferrari gone Faust and sold its soul to the devil?”

It’s a fair point, and though my head is still reeling from the mind-meltingly complicated software in the GTB, I’m also more than aware that imparting the full genius to you, dear reader, is beyond my capabilities: the technical jargon I’m more impressed by than enamoured with, the vast majority of which might as well be written in Mayan. Ah, but the passion and elegance of a 1980s Ferrari and the colossal steps of development between them? Therein lies a different matter. Indeed, Aziz is very keen to show off both his pristine GTS and the ‘romance’ of pre-1990s Maranello to not only the crankandpiston.com team but also the film crew nearby doing location shots for the new Star Trek film (yes, really). Even from a distance, the sight of two Ferraris has nabbed their attention, though arguably the 328 more so than the 488. It’s just…breath taking…. 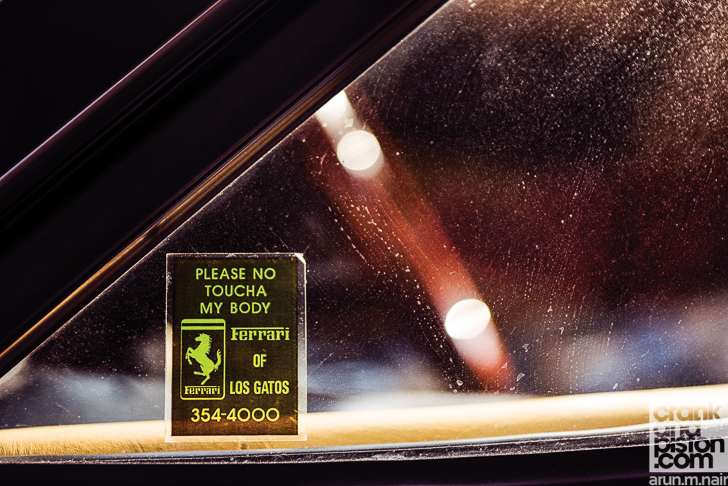 Pop-up headlights, louvres carved into the doors, targa-top with accompanying bolsters, and grooves in the sleek bonnet so intricately placed, that those gorgeous five-spokes almost pale into the background. Almost. It’s a look indicative of an age when Ferraris were achingly beautiful and one built to emphasise the performance lingering beneath rather than accentuate it. I’m certainly not going to suggest that the 488 by comparison is an unattractive car, but even despite the rippled bonnet, flowing bodylines and rather raunchy air intakes cut into the rear wheel arches, it’s nowhere near as pretty as the older car. Not to mention that there is still an awful lot of 458 Italia in the design: park the two side by side, and from a distance, you’d be forgiven for not noticing the difference. As the first turbocharged supercar from Ferrari in nearly three decades, it’s a bit underwhelming.

It’s a similar story in the interior. Yes, Ferrari has mercifully replaced the 458’s complicated and swear-inducing infotainment system with a more succinct and intuitive alternative, and the figure-hugging seats find that finite balance between stiff and snug admirably, but a heavily stocked multi-function steering wheel and a dash of carbon fibre means the cabin is spookily familiar, performance once again the byword. And then there’s the 328, whose interior has already entranced the Star Trek golf buggies that seem to swing round with greater alacrity than before for a closer look. Granted the quality is less robust, and though – as Aziz mentions – the tan upholstery matches his pet husky Hachi perfectly, it’s difficult to see the 488 dating quite as quickly as the 328 GTS. I must admit though, with myriad switches and prancing horse emblems to drool over, I’m entranced too. 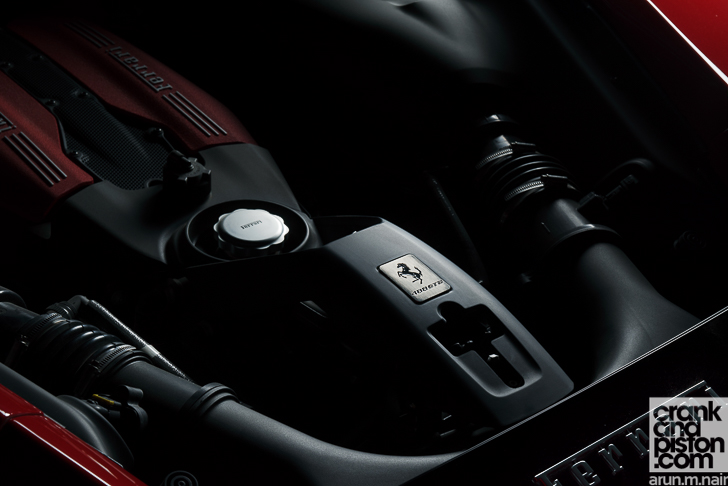 So far so 328 then. That is until the 488 fires a warning shot of its own when I jab the red Stop/Start button on the steering wheel (no ignition this time) and fire both twin turbochargers and the attached V8 into life with a cascading BBBBRAAAAR-R-R-R-R-R-R boom. All eyes are now directed back to the 488. The 328’s soundtrack may be characterful, but it doesn’t hold a candle to the aggression of the GTB. As much is to be expected though, given the three decades of technical development that separate both machines, of which the 488 – especially through the corners – is a spectacular example.

Ferrari has clearly gone the extra couple of kilometres to ensure the turbocharged V8 era is not only extraordinary but ‘emotive’ as well. Power for instance builds with customary ferocity, only for that bubbling cauldron of torque to grow in intensity rather than tail off as you cycle your way through the seven-speed dual-clutch automatic (and yes, shifts are monumentally quick). It’s a rancorous soundtrack, though one not quite as brutal as the Speciale, even if the more road-friendly 488 is less hardcore than its ‘predecessor’. Still, even despite the phenomenal turns of speed – pin the throttle in the lower gears and your shirt collar will mate violently with the bucket seat – it does feel like there’s a little excitement lacking. The character from that soundtrack and the slightly cushioned sensation of that manic pick-up is muted in comparison to other segment big-hitters like the Lamborghini Hurácan. You’d be a fool to call it ‘boring’, but it’s not quite igniting the passion in my gut in quite the same manner as the Speciale. 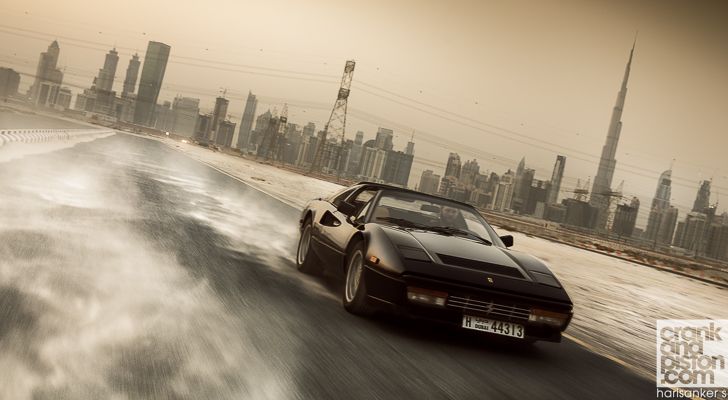 If the engine has left me slightly deflated, the handling has perked me right back up again. Steering feel is typical Maranello, quick and direct though with more weight to it than the 458 Italia. More akin in fact to the Speciale. Interesting. There’s enough feedback lock-to-lock from those enormously grippy front tyres to really lean on the front end under cornering, lunatic speeds optional. It feels light but not alienating, and incredibly easy to push hard to my own limits without treading near the Ferrari’s. And of course, the balance. The rear wheels – thanks to innumerable driver assistance safety nets – stay pinned to the ground, almost daring me to push the throttle just that little bit harder. The response is immaculate and there’s no trace of bodyroll. The chassis, even though the ride is surprisingly supple, is immensely strong, flick-flack turns taken with almost mocking ease. Once again though, there isn’t the same ‘drive on the knife edge’ insanity as we’ve previously discovered in the Speciale, and while that’s understandable for the road-orientated, more ‘genteel’ 488, it does make me wonder what the need for that extra 64bhp really is.

Even despite these thoughts, I will admit to a certain smugness as I clamber ‘gracefully’ out of the 488 bucket and watch Aziz roll in moments later. Belinda Carlisle is playing unapologetically through the after-market CD player, one of the few modifications Aziz has mounted on the classic. Indeed, that and a new Legion steering wheel to match the tan leather (and Hachi) are about it. He hasn’t even updated the air conditioning. “These cars are all about the cruise”, he mentions after disembarking. A mantra he insists I try for myself, and hands me the key to his prized possession, I intern forking over the 488 key fob.