Come 1998, Ferrari’s first prototype racer in over twenty years – the 333 SP – had already gained some notable scalps. Built using techniques attributed to the company’s 1992 F92 Formula One car, and running a modified version of the same 4.0-litre V12 (down from 4.7-litres) in the F50, the 333 SP came within an ace of winning the 1994 International Motor Sports Association (IMSA) GT Championship having already won its debut race at Road Atlanta earlier in the year. 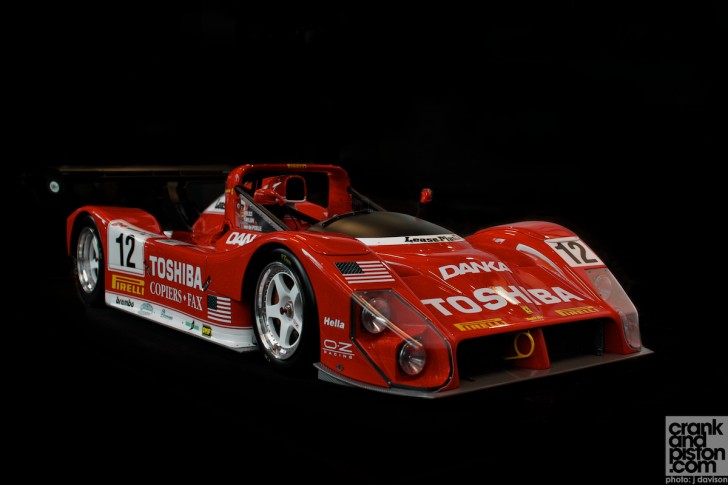 In the seasons that followed, the mid-engined 333 SP would also take victory three times out of four at the 12 Hours of Sebring between 1995 and 1998. Arguably its most famous achievement though was a 1-2-3 finish at the ’98 Daytona 24 Hours, mirroring the result of the 365 GTB/4 – hereafter called the Ferrari Daytona – at the same venue in 1967.

Come June 1998 though, one particularly large feather was missing from Maranello’s cap: the 24 Hours of Le Mans. Not since 1965 had a Ferrari driver stepped atop the Le Mans podium, but with Porsche having taken three of the last four victories at La Sarthe, many questioned whether the German’s marque’s stranglehold could be broken. In the lesser-powered LMP1 Class, it was a tall order for Ferrari. 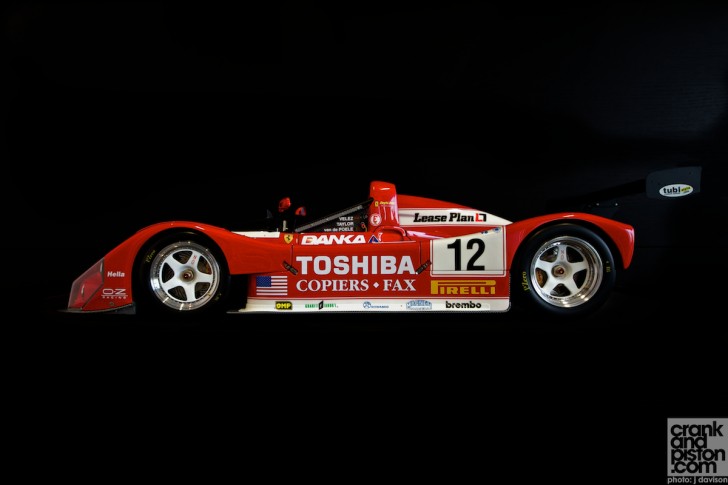 Four 333 SP’s lined up on the Le Mans ’98 grid, with this #12 edition – chassis 018 – just one place behind the sister 019 chassis in 22nd place. Piloted by South African Wayne Taylor, Belgian Eric van de Poele and Spaniard Fermín Velez, chassis 018 would go on to take the top spot at the 10 Hours of Road Atlanta (scene of its maiden triumph four years earlier) in October but had so far struggled with gearbox issues in early 1998. 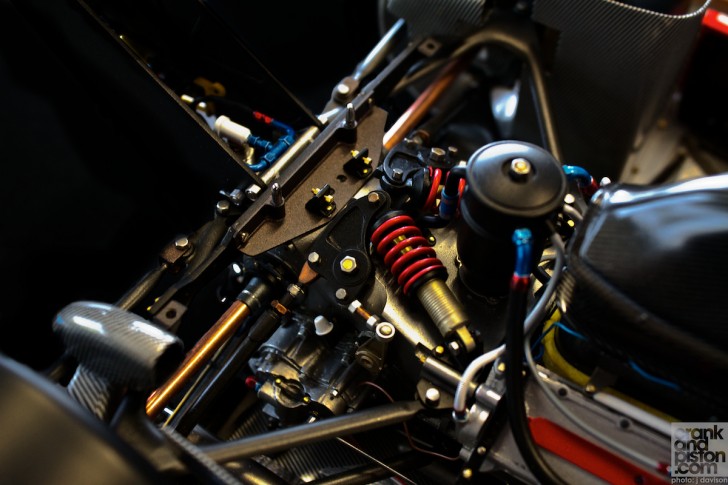 Running under the Doyle-Risi Racing Team banner, chassis 018 ran with sponsorship from Danka (which in 1998 also sponsored the Arrows Formula One team and then-driver Mika Salo, with whom crankandpiston grabbed a quick chat at the Dubai 24 Hours) as well as Toshiba. During the race, the #12 entry took advantage of its Pirelli’s durability and solid grunt from its 3997cc unit to leapfrog up the field at the expense of many of its category rivals, in particular the #1 and #2 Team BMW Motorsport V12 LMs who retired from the event early. A comparatively hassle-free run – aside from a rogue lost wheel in the latter stages – left the #12 Ferrari 18 laps ahead of its nearest Class competitor, allowing Taylor, van de Poele, and Velez to secure LMP1 class honours at Le Mans with ease. 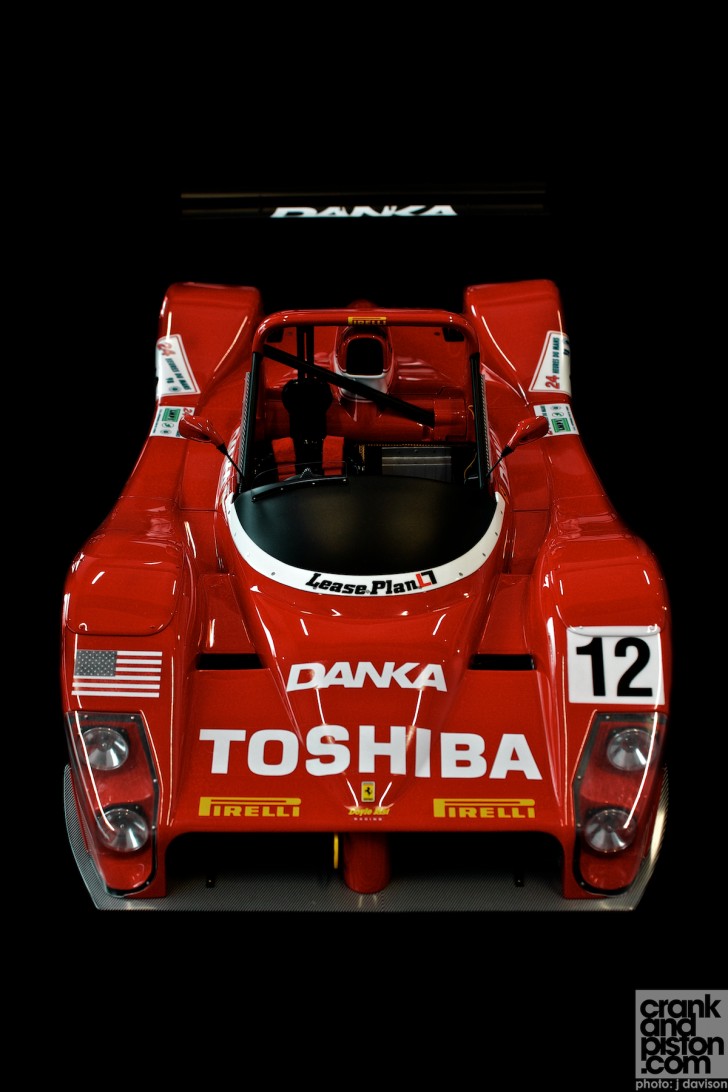 Following the triumph, chassis 018 would struggle to repeat its day in the sun. The nephew of five-time Formula One Champion Juan Manuel Fangio – Juan Manuel Fangio II – taking the wheel at that year’s Superflo 12 Hours of Sebring provided some headlines at least, though the event would ultimately end in retirement for the Ferrari. One year later, Maranello ceased the 333 SP’s motorsport campaign and this model, chassis 018, would make its final official race start at the 2000 Daytona 24 Hours.

Well, I say ‘this’ 333 SP. Considering this particular scratchbuilt 1/8-scale model, constructed by the immensely talented Michel Stassart measures just over 16-inches in length, completing a 24 hours endurance race would take some doing. 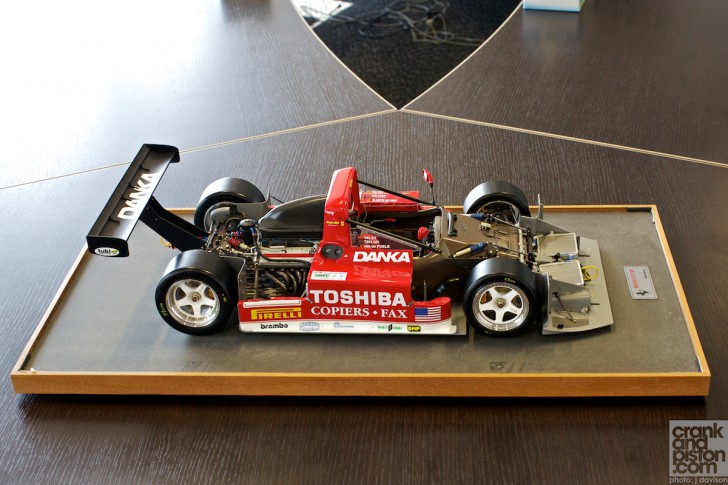 Each component is both hand built and identical to its life-sized alternative, each of which have been photographed from multiple angles in the development stages for accurate replication. The aluminium chassis is finished with faux Kevlar in the frame and mirrors the lightweight nature of its lifesize alter-ego, being just 1mm thick. All four tyres are made from GOM synthetics, a material that resists the ageing process, while each bolt and screw on the model is handcrafted from brass and steel. Elements of the suspension arms have even been formed from cast silver. And, of course, the distinctive livery and sponsor decals of the 1/8-scale 333 SP are identical to the real thing.

Construction in total takes around six months, and brings with it a fairly extravagant $15,000 price tag. Saying that, if class victory at Le Mans isn’t enough to cement the Ferrari 333 SP in the history books, then this beautiful sculpture certainly is.