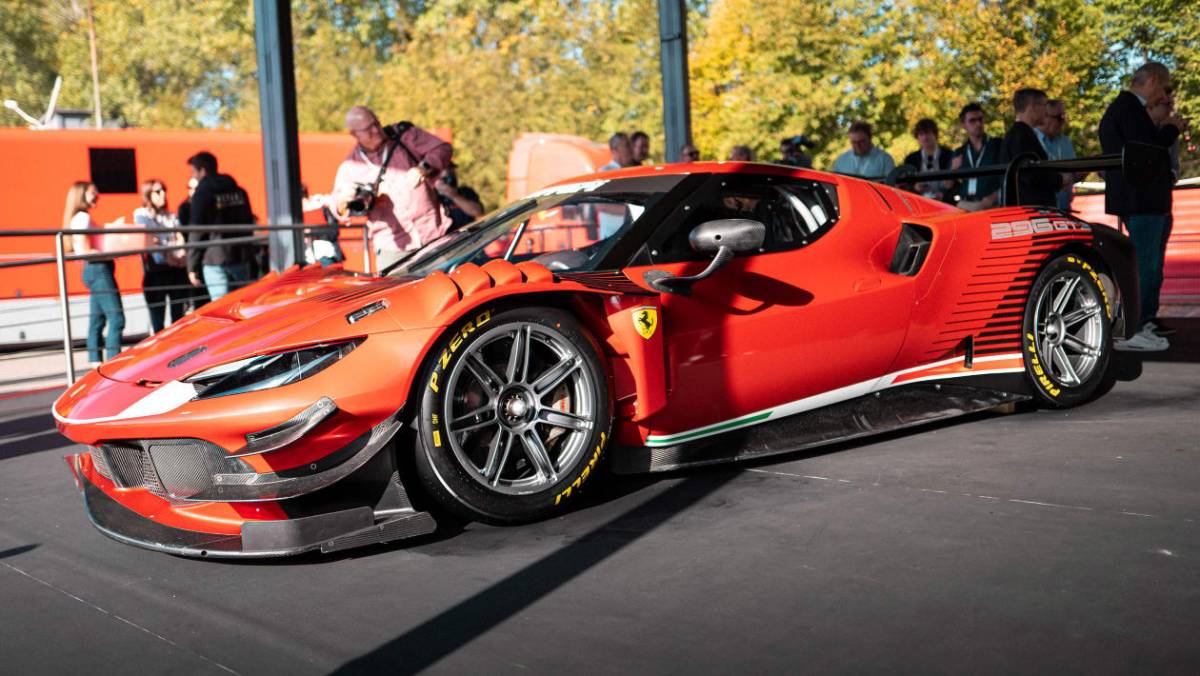 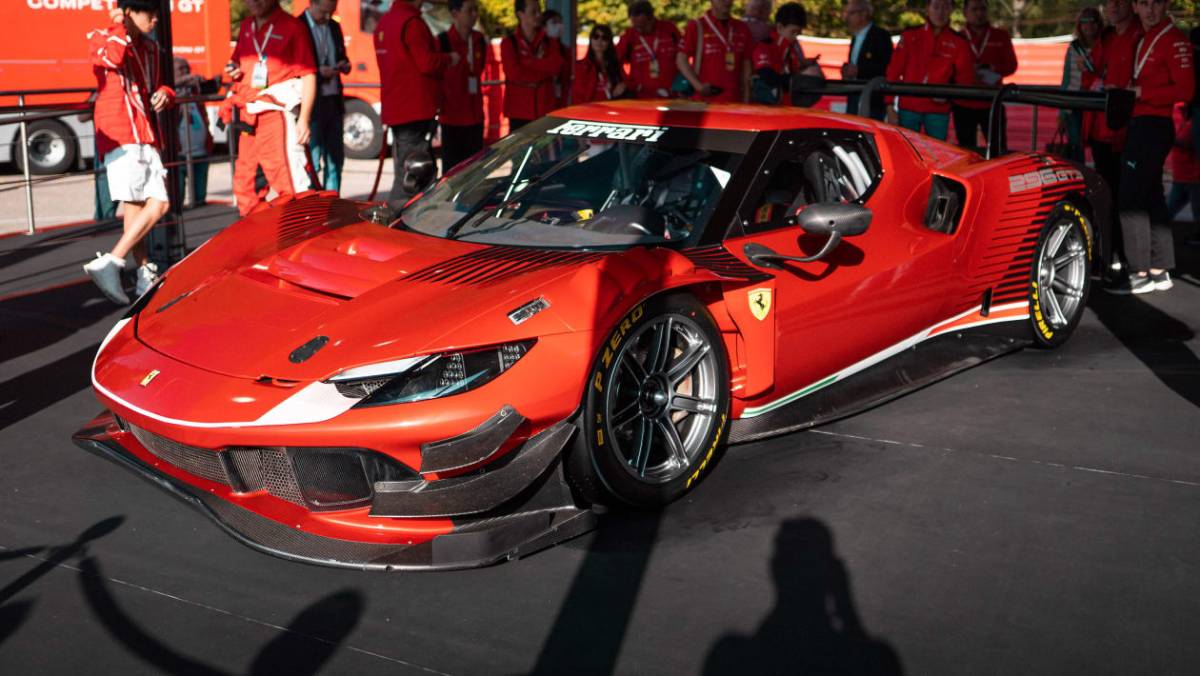 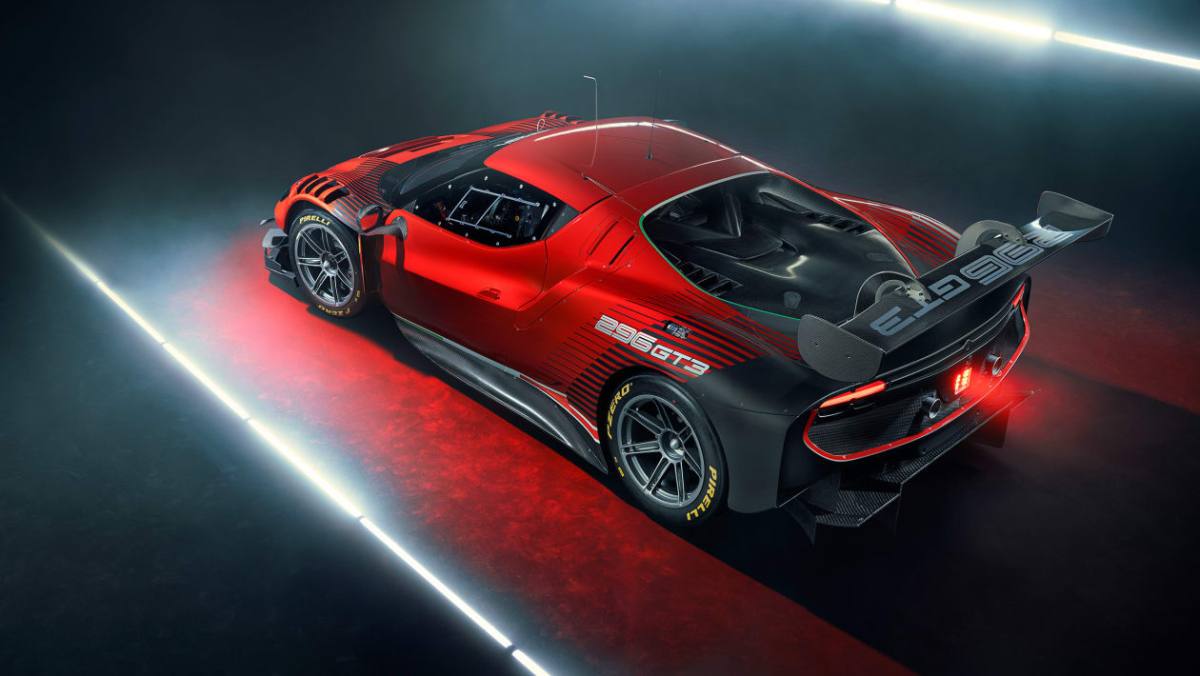 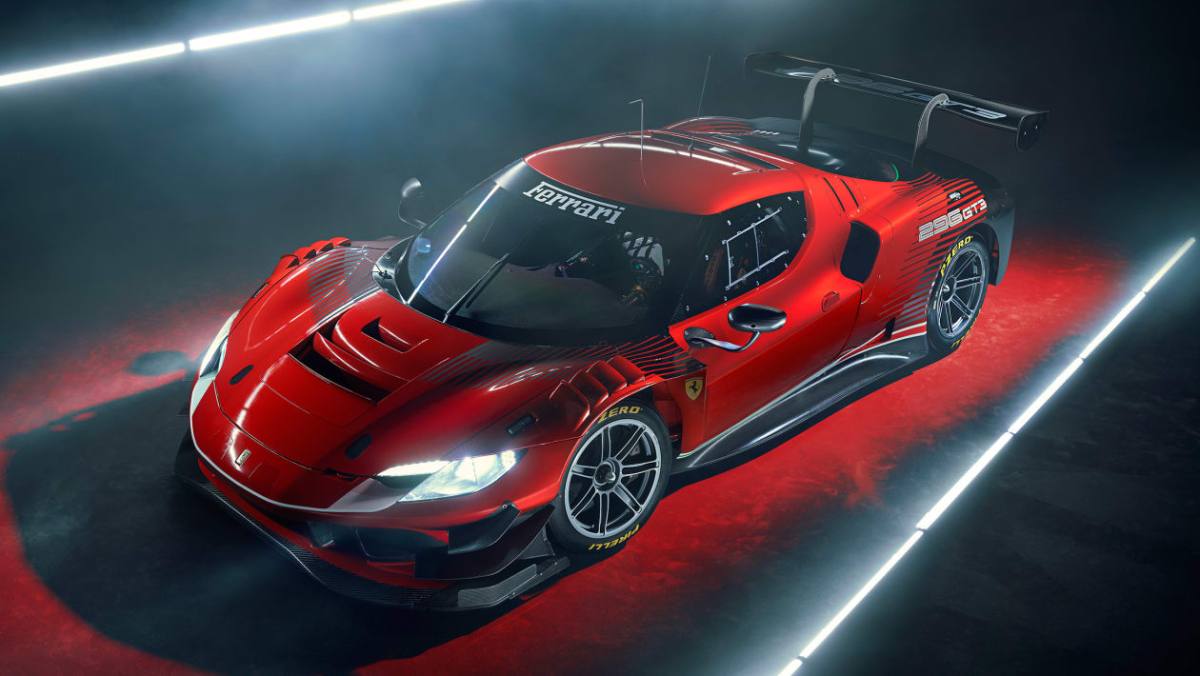 Hot on the heels of the reveal of its all-new 499P Le Mans Hypercar, Ferrari has offered a first look at its new 296 GT3 in the metal at the 2022 Finali Mondiali held at Imola Circuit. A GT racer that will go head-to-head with the likes of Porsche’s 911 GT3 R and the Audi R8 V10 LMS, it has been developed from the ground-up to offer the most for its drivers.

As with the road car, this is a totally new interpretation of the mid-engined Ferrari race car, with a new chassis, engine, transmission and aero package. The new 296 GT3 features Ferrari’s F163 120-degree turbocharged 2992cc V6 engine, but in accordance with the GT3’s current regulations, does without any hybrid assistance. Still, the new engine outperforms the current GT3 power and torque regulations, capped at a baseline 592bhp at 7250rpm, subject to the FIA’s Balance of Performance regulations. Torque is also strong at 523lb ft at 5500rpm, packing an inherent torque advantage over naturally aspirated rivals from Porsche and Audi.

The transmission is also new, sourced from XTrac. It’s a six-speed single-clutch ‘box that’s now mounted transversely to keep packaging as tight as possible around the rear axle, while the clutch is electronically actuated via the steering wheel, rather than a physical pedal in the pedal box as before. The alternator is now directly attached to the transmission, helping with access for technicians. Overall, the smaller and lighter powertrain, and its positioning both closer to the centre and lower down has made improvements to the overall centre of gravity, and has also helped with torsional rigidity, which is 10 percent greater than that of the previous 488 GT3.

The chassis is constructed from aluminium with an integrated roll cage, and features a 60mm extension to the wheelbase in comparison to the road car. This, together with an aggressive new aero package gives the 296 GT3 a 20 percent increase in downforce. There are double wishbones all-round, but the suspension is a totally new design, with bespoke geometry and, curiously, a slightly wider front track than rear at 1726mm/1710mm.

The 296 GT3’s dry weight is rated at 1250kg, but the final figure (like the power output) will be determined by the BoP requirements. Ferrari has upsized the brakes marginally, with 400mm front discs gripped by six piston calipers up front, with a 332mm and four-piston combo out back.

As well as competing in the usual GT3-regulation series from around the world, in accordance with new FIA WEC class changes in 2024, the 296 GT3 will also join the new Porsche 911 GT3 R and others in the new GT class at Le Mans from 2024. This means that alongside Porsche’s 963/911 GT3 R pairing in the two classes, so too will Ferrari be competing with its new 499P Le Mans Hypercar and the 296 GT3.

Times are complicated right now, but if you find solace watching cars go round and round a race track, things have never been so good. Le Mans 2024 – it’s going to be a wild ride.