I squeeze into the left-hand seat, which is tight and compact. My head brushes the ceiling and a laid-back seating position is demanded. The steering wheel feels thin by modern standards, with nothing so vulgar as an airbag tarnishing its famous yellow centre badge. The metal pedals are offset to the right, necessitating a shimmy of the backside to find the best position.

The 288 sports a dogleg gearbox, which means first is down and left. It engages with a classic rifle-bolt click of stick on metal gate, and I meekly indicate, hoping the busy traffic will let me out. Luckily, a black cab waves me on. I promptly stall the car, having erroneously expected a very stiff clutch but instead found one surprisingly easy on the left quad. A prod of the starter button fires up the V8 behind me once again, and off we go with a bark of cylinders. The cabby’s generosity proves an omen for the reaction one gets driving a 288 GTO in London – universal appreciation. Unlike a poster car such as the F40 or Enzo, the 288 GTO is relatively understated. But those that know what they’re looking at hang back in traffic. Out come the camera phones, and admiring comments filter through the open window. 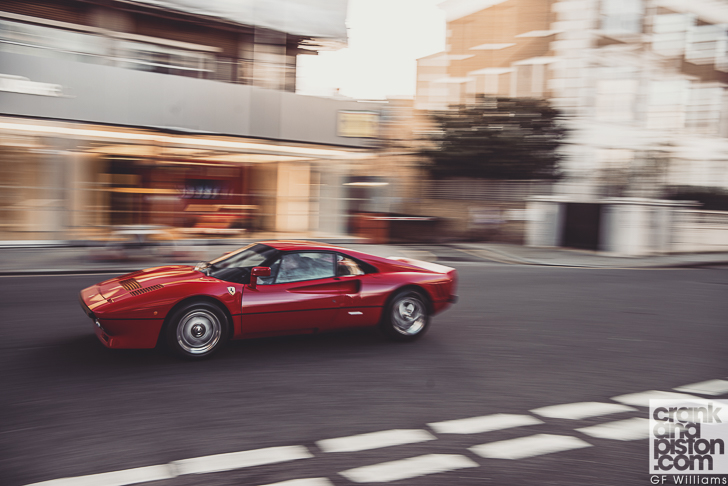 I’m terrified of dinking the flawless paintwork on a stray bus, but as we find traffic-free sections of road I pluck up the courage to open the throttle. The surprising sedateness of the car’s lower revs disappears when the twin turbos whoosh, sending 400 horsepower to the chunky rear tyres. The exhausts sound a metallic fanfare, the rear tyres squirm and the acceleration pushes me back into the new black leather. The power figure seems mediocre by modern standards, but thanks to its low weight the 288 was and still is a very rapid machine. It feels like it would bite if pushed, but I correctly assume that Owen doesn’t want me to get anywhere near a situation where I could find out. The brakes are strong, although with more give in the pedal than I’m used to from supercars of today.

“I meekly indicate, hoping the busy traffic will let me out. Luckily, a black cab waves me on. I promptly stall”

Also different is the steering. The Ferrari’s feel is beefy and heavy and textured feedback pours into the cabin through the wheel, the seats and the air that whistles around my ears. It’s a tactile, exhilarating experience but not as daunting and difficult as expected; at slow speeds, it’s well behaved and comfortable, save for the shoulder strength needed to heft the wheel around. 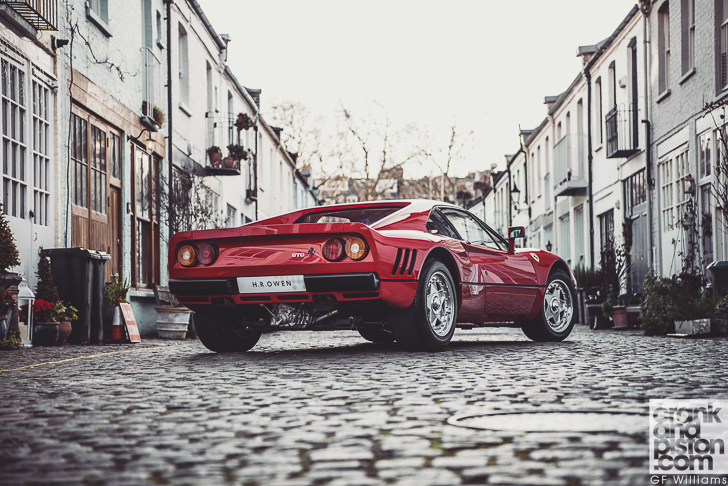 After what seems like no time at all, but is probably around half an hour, Owen suggests that we head back. What to make of this underappreciated jewel in Ferrari’s crown? Well, it’s impossible to get a full understanding of what the 288 GTO can do in this short time. But I’ve had a flavour, and I like the taste. The mid-‘80s were a time when before the digitalisation of cars, when the analogue era was reaching an apex. The feedback, texture and sensations provided by the GTO are all pure and non-simulated. There’s a feeling of mechanical involvement that modern cars can’t recreate, no matter how sophisticated their software.

It seems unlikely I’ll get a chance to drive a 288 GTO again. Such is their rarity and their soaring values that collectors will be increasingly keen to keep their investments tucked away, rather than allow their potential future earnings to be revved away with each added kilometre. But to experience just a small fraction of what being in charge of a 288 GTO is like is a privilege; a frustrating one, given the constrained circumstances, but a privilege nonetheless. I fervently hope that I’m wrong about my chances, and that fate brings us together again.