Kimi Raikkonen has every reason to feel confident heading into the Malaysian Grand Prix. Not only is it one race on from his victory in Melbourne – his second Formula 1 success with Lotus following his win in Abu Dhabi last season – but it was also the scene for his debut F1 win in 2003. 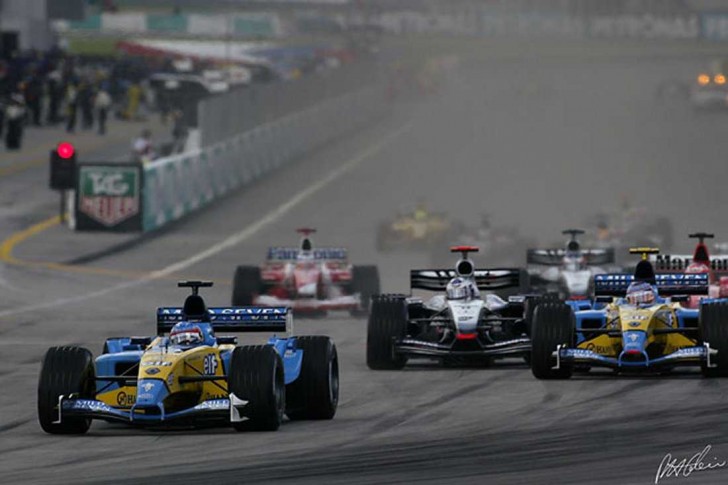 Fernando Alonso had already made history in the unbelievably humid conditions at Sepang when he became the youngest polesitter in F1 history. One day later he would also become the youngest driver to lead a Grand Prix, a record held since 1959 by Bruce McLaren. His fellow front-row starter, Renault teammate Jarno Trulli, however was less lucky, a clout from Ferrari’s Michaal Schumacher sending him to the tail of the field. A tangle between the Jaguar of Antonio Pizzonia and Juan Pablo Montoya saw the Williams pit for a new rear wing.

David Coulthard, fresh from (what would turn out to be) the final Grand Prix of his career, would retire early with electrical issues. Great pit stops and one or two scything passes through the midpack would lead to Kimi Raikkonen grabbing the lead before half distance and holding station to the chequered flag. Slick pitwork from the Ferrari team would see Ferrari’s Rubens Barrichello leapfrog Alonso in the latter stages, whilst Schumacher – having served a drive through penalty for his earlier collision with Trulli – would only just hold off a charging Jenson Button in the BAR to take seventh.

Only cruel circumstance had denied the Finn victory at the 2002 French Grand Prix (when rogue oil dropped by the Toyota’ Allan McNish allowed Messer Schumacher to sweep by), but finally Raikkonen got his day in the incredibly hot sun.