May 23, 2018 Kevin Hackett
We cannot display this gallery

While these cars are built in the UK factory at Gaydon in Warwickshire, the V12 engine is crafted in the same Cologne plant that’s been used by Aston for years. It’s basically the same unit as was fitted in the DB9 and the other V12s, the Rapide and Vanquish, but its cylinder stroke has been shortened and its capacity reduced to 5204cc. It’s the addition of two turbochargers, then, that elevates the DB11 to supercar performance levels, with peak torque of 516lb ft coming in at just 1500rpm. You might scoff at such an engine producing ‘just’ 600bhp with a couple of blowers strapped to it, while the Italians and even Americans now are liberating much more. But you have to remember this is, first and foremost, a GT car. The V12 is capable of significantly more power and rumour has it that the next Vanquish will prove just how much when it’s unleashed in a year or so.

It’s more than four years since the announcement that Aston Martin had signed a business agreement with Mercedes-AMG for a significant technical partnership, and the 4.0-litre V8 engine in the latest DB11 is the most obvious result yet from this relationship. It’s the same unit as you’ll find pressed into active service in Merc’s AMG C63 S, however it has been ‘Astonised’. If nothing else, the thunderous below the hot Mercs are famous for is a bit uncouth for such a glamorous machine, so Aston’s engineers have worked hard to give it its own, distinct character in both sound and power delivery, with new air intakes, a different exhaust system and a modified ECU.

Losing four cylinders means the V8 weighs 115kg less sprung weight, which can only be a good thing, especially as the smaller motor benefits weight distribution. Having a smaller engine could well make the entire car feel more sprightly and, indeed, its top speed has been deliberately limited so as not to steal any more of the V12’s considerable thunder. Apart from this, there’s very little difference in their on-paper statistics – in fact its 0-100kph sprint time of 4.0 seconds is officially just a tenth slower than the V12. When comparing them on paper, there’s not much of a case to be made for the full fat version, is there?

And it’s the V12 I experience first. I’ve driven one before now and was blown away by its slingshot performance, which made the DB9 appear rather sluggish in comparison. It sounded fabulous, too, with the turbos doing little, if anything, to impede the noise that only a V12 can generate. But more than anything else the way it handled was a revelation, whether on a tight country road or technical racetrack. Matt Becker, the man in charge of its development, is a former chassis guru at Lotus, and his team’s work on making the DB11 feel far lighter than it actually is has been the car’s greatest trump card. 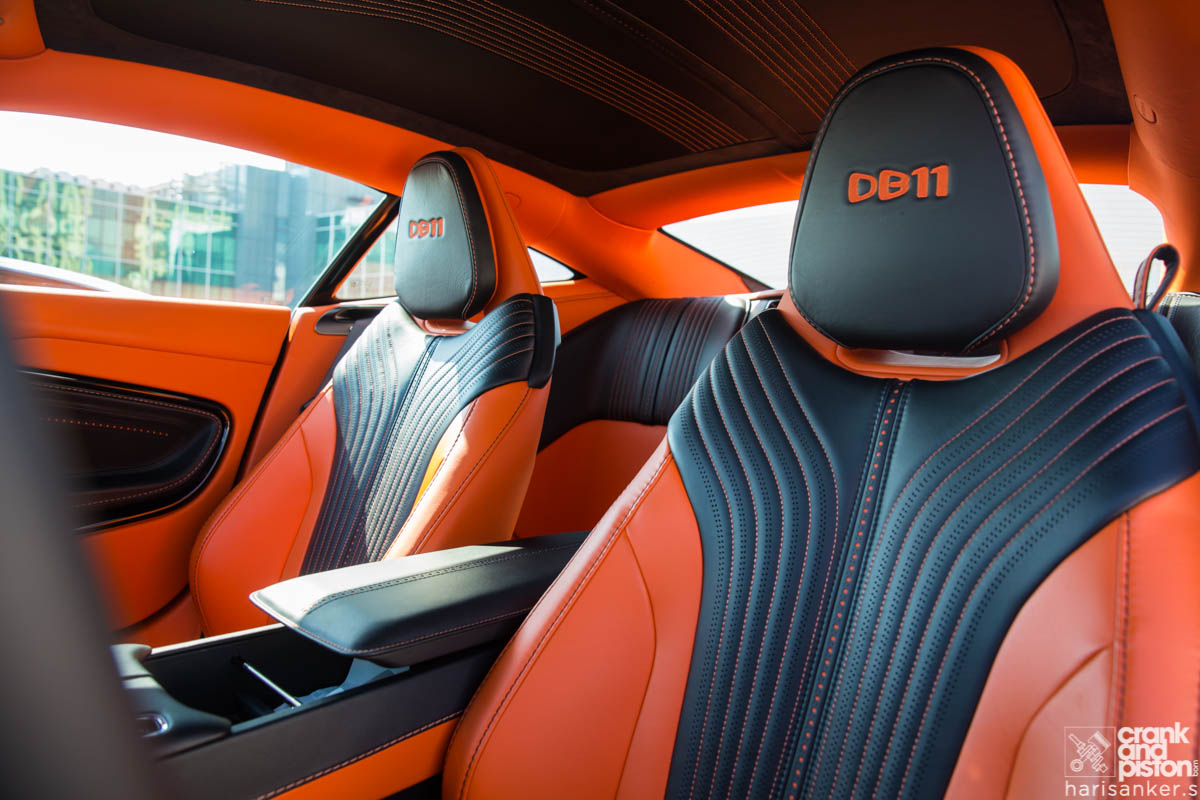 Those memories come flooding back as the roads around Wadi Shawka Park open up. This region, between Sharjah and Fujeirah, is paradise for driving enthusiasts – the mountains are jagged and the twisting roads that run beneath them are mostly perfectly surfaced. The air is clear and there’s hardly anyone else here, meaning there’s lots of scope for digging deep into the performance envelopes of both cars.

In V12 guise it’s the most powerful model ever to wear the DB moniker and it feels it, too. The surge is relentless, effortless, unspoiled by lag. It’s a huge departure from its predecessors but there is, on reflection, less in the way of audio theatrics than big Astons of yore. Get it past 3,000rpm and the noise is uniquely V12 but it doesn’t seem to offer the same full orchestral range as the normally aspirated ones. It sounds delicious, don’t get me wrong, it’s just there are fewer layers now, to what was one of the truly great motoring soundtracks. When that storming Vanquish replacement comes along, things may well be different.

With the suspension and drive modes in S+, the engine note definitely becomes more dominant and this is when the car shows how much it just grips and goes. Throw it into a bend and it corners with flatness and confidence, while the more responsive throttle and gear changes make for indecently rapid progress as you dive in slow and emerge onto the straights with huge pace. Snap the steering, get on the throttle and the rear end will come out to play, although this kind of behaviour seems almost unbecoming for such a civilised machine. It’s a brute in a suit.

The ZF automatic gearbox is shared by both models here and is extremely smooth in its shifts, while the brakes pull it up from outrageous speeds with complete composure. The adaptive suspension is wonderful, too, offering refined comfort on rougher roads and sure-footed cornering when you go for the stiffer settings. It’s huge fun, this thing, which as lovely as the DB9 was, it rarely made you want to give it some stick. You can’t help the feeling that this new car is made of sterner stuff, though, and can take anything you throw its way. It corners flat and true, despite its undeniable heft, and the electromechanical steering, while light and devoid of meaningful feel, is remarkably responsive.

There’s very little to complain about in any aspect of the V12. In fact editor Kronfli, who has spent a couple of days getting to know the V8, hits the nail squarely on the head when he remarks that the DB11 is the first Aston that a sensible person might consider owning. It feels better made than any that’s gone before it. 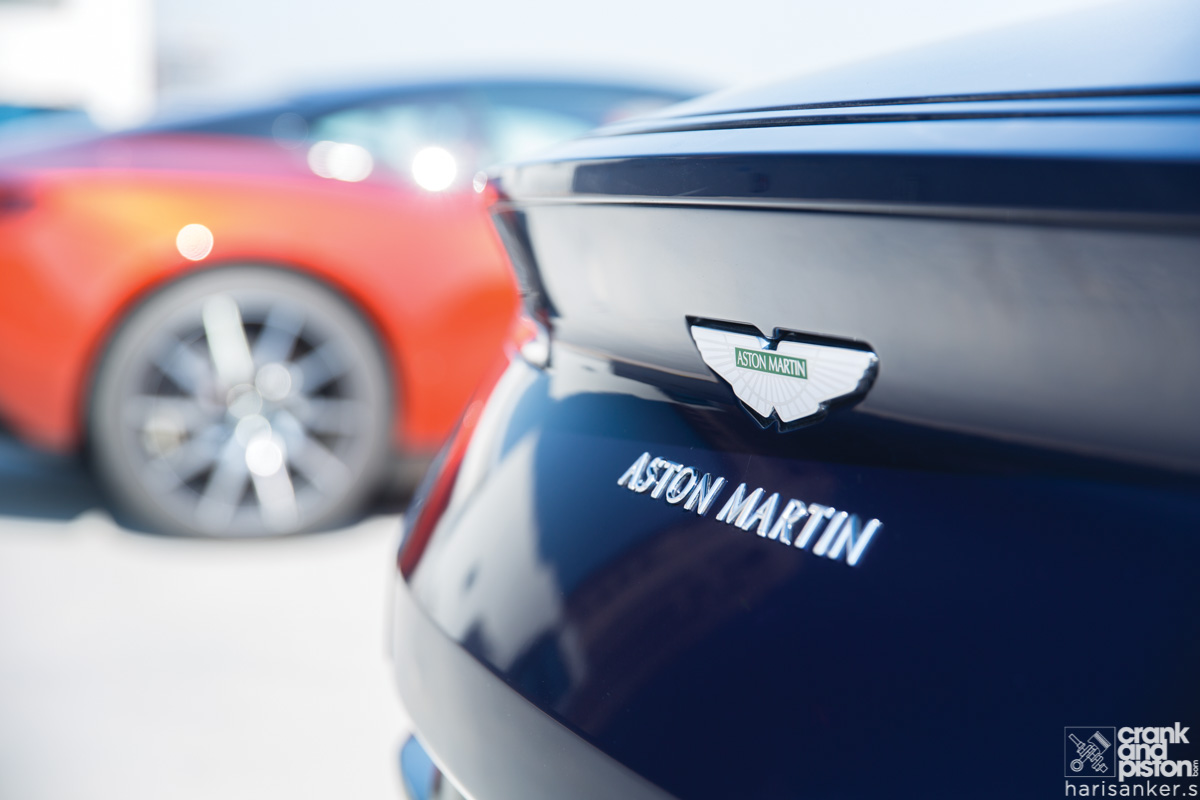 As I swap seats for the smaller engined car, I run my fingers over its cabin surfaces – a very worthwhile exercise, as the wood, leather and metal come together to provide a sensory experience that shows how much Aston Martin has upped its game. It’s a wonderful environment, especially with the more restrained colour scheme. On start-up it’s obviously a more refined motor than those found in AMG’s products, although its origins can’t be fully disguised. A dab and lift of the throttle gets the exhaust crackling. Lovely.

After the turbine-like grace and pace of the V12, powering off in the V8 still feels startlingly quick and it’s immediately apparent that the car is more fleet-footed, that reduced weight over the front wheels, as is the case in Bentley’s smaller capacity models, making a marked difference in driving dynamics. The sound is pleasingly raucous and entertaining, too, and peak torque comes on song at 2000rpm, at which point it lunges forward with alarming enthusiasm. Mid-range response is incredible and it’s only at the top end of the rev range that I can feel this engine is having to work hard for a living. The effortlessness of the V12 is absent but that’s not to say this feels any less enjoyable – in many respects, apart from the exhaust notes, there’s little to tell them apart.

While either DB11 is undoubtedly a “grand tourer” in the best tradition, this twin-turbo V8 mill does seem to magnify the car’s sporting side, lending it a lightness of touch that’s more playful. It still comes across as a car in which you could easily cross entire continents, but there’s a youthfulness to its persona that will appeal to a different kind of customer base. It’s eager to please, almost as though it’s aware it has a lot to live up to, and feels extremely tight while remaining utterly civilised when you’re taking it easy. 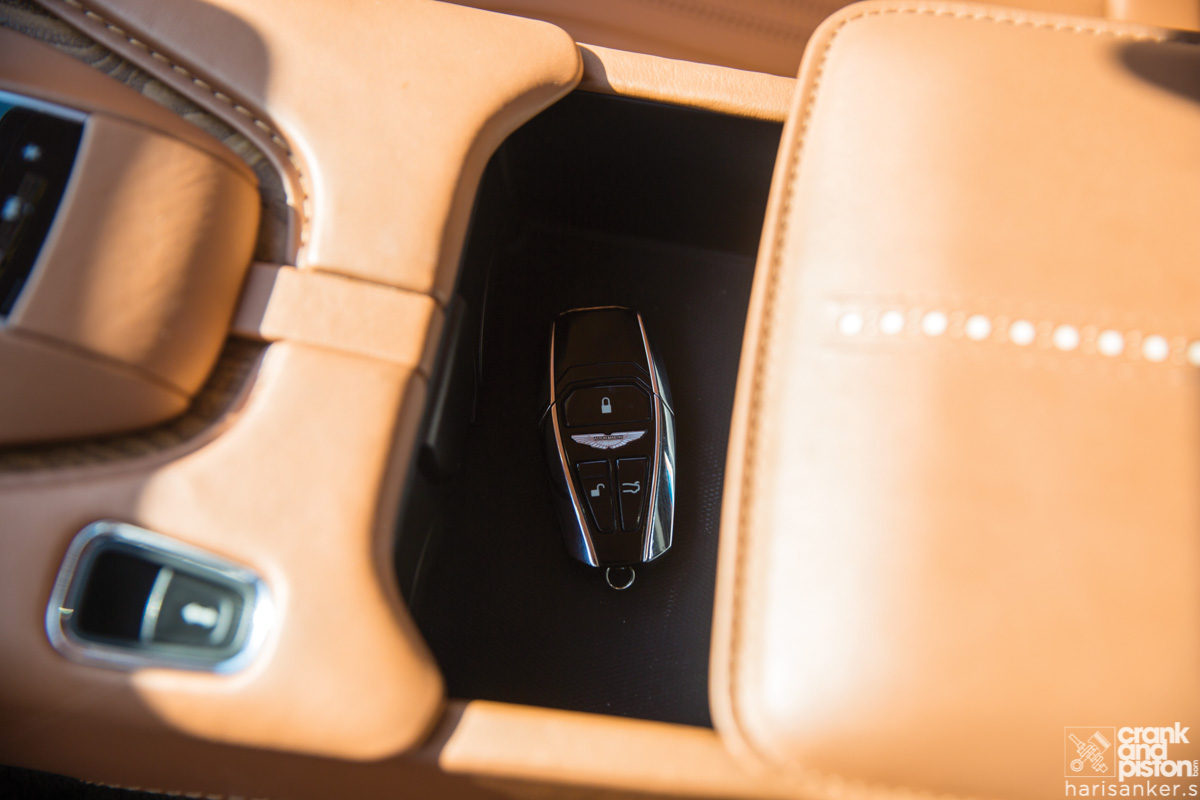 This is not the first V8 DB model, in fact that was the DBS V8 of 1969, which evolved into the bruising Oscar India V8 and V8 Vantage models of the 1970s and 80s, the latter being for many years the fastest accelerating production car on the planet. So there’s a heritage there that should allay any fears that, by opting for the smaller engine, you’re accepting less of an Aston. This thing does the badge no disservice whatsoever.

The more I change between these two Aston Martins, the more subtleties I discover in their characters, especially with the sounds they emit. I can’t resist constantly lifting off the throttle in the V8, just to hear those fireworks go off in the pipes. And in the V12 I revel in the top end of the rev range, where there appears to be a boundless energy source that gives it a dominant personality, one of refined and absolute power, of finesse and charismatic brute force. That they appear so similar physically and both offer extraordinary performance repertoires makes choosing between them almost futile.

It’s a test that, ultimately, features no victor. There are those for whom the idea of accepting ‘second best’ will simply not do and, for them, only the V12 will suffice – Bentley has found this out and sales of the bigger engine models continue to be strong. Yet reducing the cylinder count by 25 percent does nothing to undermine the V8’s ability to put a smile on its driver’s face, it’s a remarkably accomplished automobile. Either way, if it’s your money on the table you’ll end up owning one of the world’s very finest GT cars – the DB11 in either guise really is that good.