After finishing the cosmetic mods, the next stage for our new project car – a Jeep Wrangler Sport – was the one we’d been looking forward to most: mechanical and performance modifications at Ramy 4×4 in Dubai.

We were confident the Jeep was in good hands. Specialising in modifying SUVs – and Wranglers in particular – the team has been a regional staple for 36 years and draws on experience from even further back than that: to ensure top quality work, the guys even modify their own cars so they can test each piece of equipment in the field. It’s all in the name of good customer service, and it’s no real surprise that Ramy 4×4 is the dealer for nearly two dozen well-known brand names, including KingShocks, AEV, Teraflex, Artec and Bestop among others.

We met up with deputy managing director Marwan Semaan, who gave us a better idea of the mechanical mods we should be concentrating on, and even recommended some of his personal favourites. First up were changes to the tyres and suspension. After much deliberation we chose a progressive spring suspension system from American Expedition Vehicles and KING shocks.

“These progressive springs are amazing.” Marwan mentioned. “They’re very soft by nature, but as soon as there’s load on the car or if it’s going off-road, they get stiff right away. That makes driving to and from the desert a pleasant experience and not a tough one”

The KING adjustable shocks meanwhile are bolt-on – no welding or cutting required – and can be easily removed should we change our mind further down the line. Teraflex short arms were installed where you can allow custom pinion and caster angles for proper alignment. That just left a decision on tyres, and given the work already done to the heavy duty suspension, we grabbed ourselves a set of 35in BF Goodrich KM2, known as the best on the market thanks to great traction, limited road noise and high off-road capability.

With new suspension and tyres now fitted to the Jeep, Ramy 4×4’s team had to re-enforce the front live axle (either that or risk snapping it entirely with the heavier suspension components and huge tyres). A full reinforcement truss kit by Artec was welded onto the front axle to cover the knuckles. Alongside this were new Teraflex inner sleeves, which were fitted to reinforce the factory axle tubing, and a strong Alloy USA 4.56 ratio ring and pinion gear set to strengthen the differential (a process taken on by workshop manager Rafiq, whose help proved invaluable throughout the entire process). KING bump stops have also been installed to help us attack the dunes at almost any angle without losing traction. Their alternates at the back however are SumoSprings bump stops, which are made of polyurethane and thus make the rear much smoother at cruise. 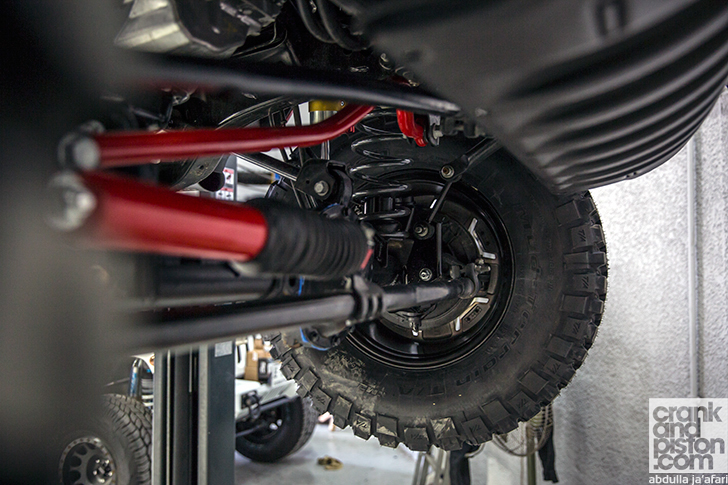 Phew! Okay, that’s the suspension mods accounted for. Next up was the engine.

First up was an Airraid cold air intake system to improve airflow. A Gibson exhaust has also been installed in black ceramic finish, which both boosts the performance of the car and also gives it a much better appearance from the rear (it also sounds completely different). Finally, an AOR speedbooster has also been installed to control throttle response and get immediate acceleration gains when needed: lag through an automatic gearbox is not exactly what you’re looking for off-road.

Finishing touches at Ramy 4×4 included an on-board ExtremeAire Magnum air compressor to inflate and deflate those massive new tyres (which have been mounted on black Rockstar wheels for a meaner look), a lightweight aluminium Teraflex tyre carrier, a rear view camera by AEV, an AEV hood for better engine breathing, and – for that all-important old-school look – some Vision-X round LED lights in place of light bars.

As you can probably tell, the amount of effort put in by Marwan and his boys has been incredible. There’s not long to go now before our project car is finally ready for its debut reveal, but before that, we’ll be heading for some cleaning treatment ahead of the final photoshoot. Stay tuned. 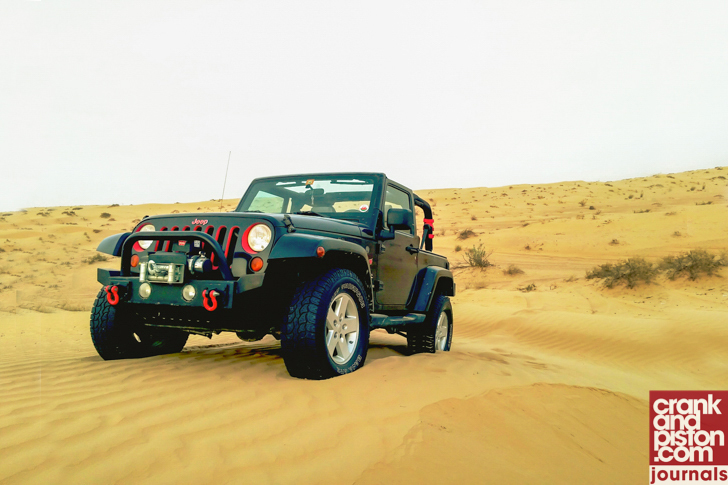