Have you ever tried driving a Caterham in rush hour traffic? Turns out it’s terrifying.

Granted, by its very nature and despite company claims that the Spartan Seven finds ‘a perfect balance between road and race car’, the British sports car has been an advocate of ‘accessible fun’ – and mostly on-track to boot – since its debut in 1973 (or ’57 if you count the original Lotus Seven). And little has changed in the intervening four decades. Our test model today is the new 360, which made its global debut in March and landed recently at new UAE distributor Al-Futtaim Motors. It epitomises the super lightweight principle heralded by forefather Colin Chapman. There are two seats, limited boot space, lightweight materials in the build, the same basic four-cylinder found in a Formula Ford car, and only a smattering of carbon fibre. It’s a design born, and basically left untouched for, the track. Still, a boy’s got to get to the office somehow… 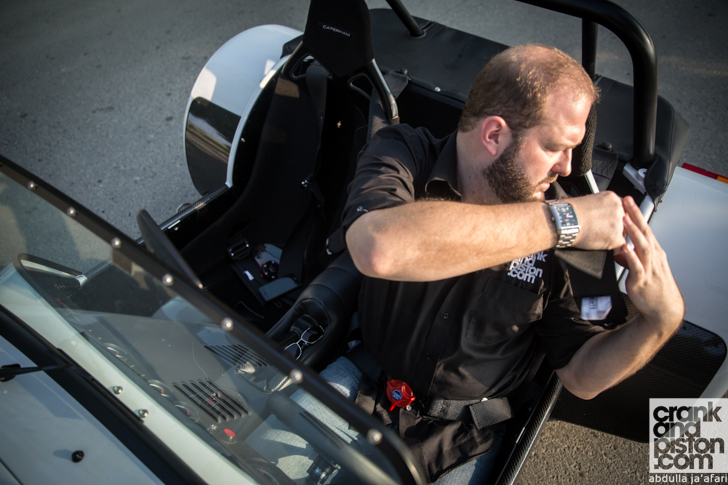 The first step is getting in…

It’s a process that requires removing the cockpit cover, finding the ignition switch (skillfully hidden as it is beneath the dashboard), and attaching the petite Momo steering wheel. Should take no more than, oh, ten minutes. Our 360 test model comes complete with ‘R’ package options, which includes a carbon fibre dashboard, composite bucket seats and 15in Orcus alloys among other things to up the bad-assery levels. You’ll find performance though, save added stability from the anti-roll bar and better road holding from the sports suspension, is largely the same. It also adds $8K to the $49,000 base price and marks a significant change to the more road-focused ‘S’ spec, which offers full leather seats as well as carpet. Plus a standard seatbelt, but with practice, the four-point racing harness in the ‘R’ should take less than 10 minutes to connect. Reach across, manually adjust the mirrors, and we’re off.

That 2-litre Duratec is the same engine that powers Caterham’s top-tier R300 racing car, though its 180bhp and 143lb ft of torque means the 360R sits in the middle of the range, but with a 530kg kerb weight, you still have a sizeable 321bhp/ton power-to-weight ratio. This thing is far from slow…. 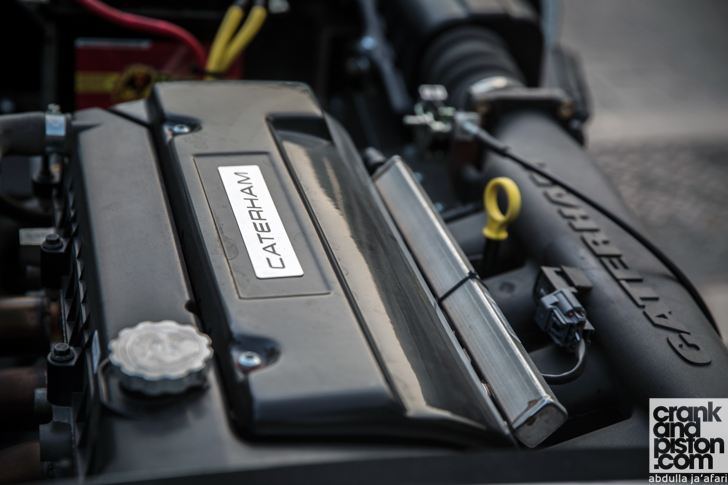 Is it difficult to drive in traffic?

Kind of. The bite point on the clutch is high and the throttle sensitive to input, so bunny hopping at the first go seems inevitable (don’t stall, don’t stall, don’t stall…argh, stalled…). Saying that, the engine notes of the un-insulated four-cylinder at idle makes it difficult not to get into the spirit. Try to hold back a smile and you’ll fail. Miserably.

I would regale you with power delivery impressions, but since my morning drive puts me immediately onto the highway, I’m too aware of the 18-wheelers and SUVs that could pile into me completely unsighted: my eyes are at exhaust level, and if I misjudge my lane placement, I’ll be completely lost in their blind spot. There’s no roof so all-round visibility is excellent, but the mirrors vibrate so alarmingly as I pick up speed that spatial awareness to the car behind me is pure guesswork. Added to that, I’m already starting to feel the cabin’s ‘R’-factor after just a couple of kilometres. The sports suspension, as you would expect, has been tuned for performance rather than comfort, every undulation on the road burying itself into my lower spine. There is no dead pedal, and therefore no place to rest my left foot when required, and since there’s limited room in the footwell, I also can’t bend my knee without tearing the steering wheel off as I do: there’s nothing but tension in my left calf as I try to avoid riding the clutch. I’ve started second guessing lane changes I would normally make without hesitation when I’m encased in metal, I feel very exposed in the Caterham and abandon the highway as quickly as possible. 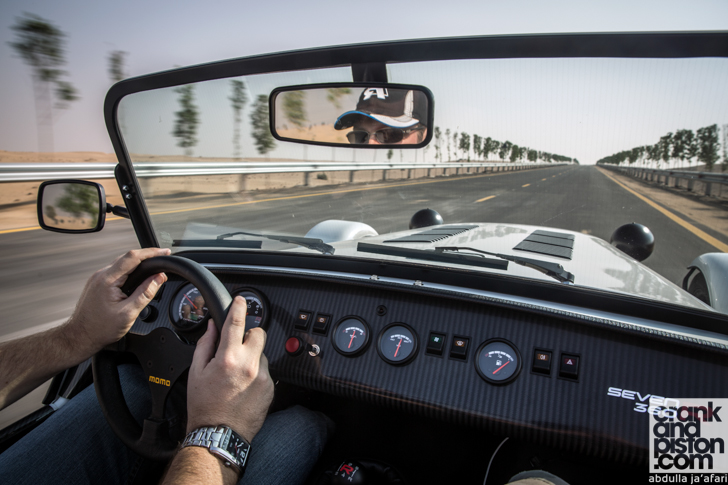 It’s on the winding back roads though that I start putting our Lamborghini Ice White test model through its paces. On upshifts, power seems to kick the small of my back as 180bhp hurtles to the rear wheels. The grippy R15 Avons means there’s little slip, acceleration is absolute and almost violent on the way to the 7000rpm redline. Granted, a lot of this could be down to the rush of wind hitting me in the face and the four-cylinder getting louder as speed increases, the sensation of 100kph feels more like 200kph from where I’m sitting. Not that I mind too much: it’s a sensation that’s absolutely addictive now that I’m out of traffic. Just let me re-adjust the mirror again…

With no power-assist at all, steering at low speeds is ridiculously heavy, but on the more winding stretches of road, it’s superbly direct despite the very small wheel. The front end locks onto line as I take a brave pill and load up the Avons with even more acceleration through sweeping turns. Sitting effectively on the rear axle, it’s an odd sensation watching the suspension components in my peripheral vision working over the bumps, the long bonnet stretching way out in front of me. Even despite the superbly low centre of gravity, how can the weight distribution be balanced like this? Of course I needn’t worry, for although the rear end can get a little lively when I’m too amorous with the throttle, the grip at the front is absolute, the feedback from the steering akin to a go-kart offering just as much precision. This is a design after all that’s remained largely unchanged by Caterham for more than 40 years. 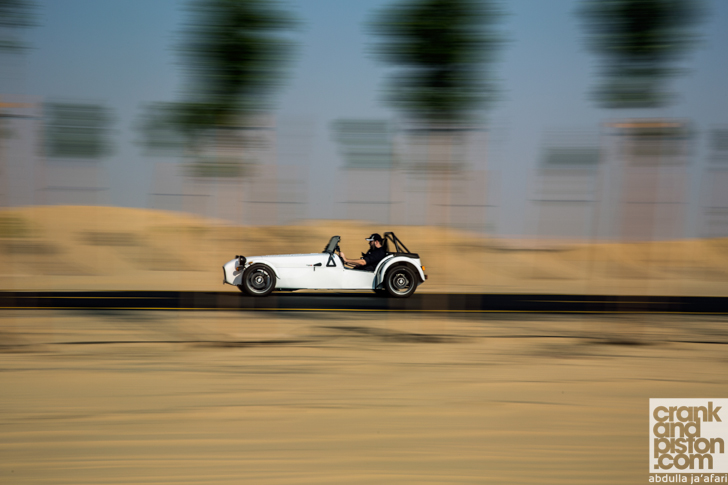 If there is one thing alarming me slightly, it’s the stiffness of the brake pedal: press lightly and the 360 doesn’t slow at all; press harder and the discs will snatch. It’s a balance I spend all day trying to find but never quite nail. This, plus the loss of feeling in my left leg and the effort required through my shoulders for the steering emphasise just how physical the Caterham is. When I finally roll into the office car park, my back is stiff, feeling below my knees is missing, most of the hairs on my left arm have been sand blasted off, my shirt is about 75 per cent sweat, and the key refuses to come out of the ignition. As a road car, the 360R struggles to find ‘the perfect balance’.

But I don’t care. I really, really don’t. Because as an advocate of ‘accessible fun’, this thing is absolutely magnificent. 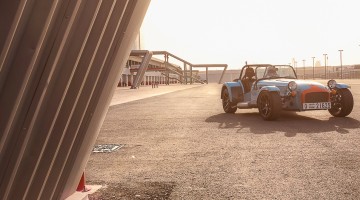