Caparo T1. Anyone for T?

In a regional exclusive, crankandpiston.com drives the Caparo T1, THE weapon of choice on-track

If you shy away from articles that start off with the day, date, time and attributes relating to insignificant elements such as the weather, and what that particular author was wearing that exact moment in time, I apologise in advance. For the time was in fact 10.45am on a Monday (23rd June as it happens) with a South Easterly hit of 47-degrees and a humidity of 26 per cent. The day, by all accounts, was clear with good visibility at 16km. And as for me, so it happens, I was wearing a pair of blue jeans, a red Nike t-shirt and a brown fedora hat.

I sympathise, truly I do, as I am not entirely the world’s number one subscriber to articles that begin so emphatically either, but in the case of the Caparo T1 I trust you’ll extend the courtesy of forgiveness and patience, as every millisecond of a day such as this has to be documented in fear of genuinely missing something insanely important out of the remarkably exclusive moment. Watching the GulfSport Racing transporter roll along the service road that morning, up to the pit garages where we are all sat, was eerie. The Renault truck could have been filled full of nothing more than bubble wrap, as far as most people were concerned, but we knew damn well what was harnessed down inside. And it was the knowing that got the goosebumps slip sliding up and down the arms and all the way around to the nape of the neck.

The usual conduct at any given photoshoot is (I must admit) that of schoolboy humour and mindless pranks. There is usually a lot of junk food and beverages on hand too – and just as much time is spent ribbing anyone present about anything and everything for a giggle, than the nitty gritty of road testing. Today was not one of those days. The usual suspects were on hand today, but the stern task in hand had brought out a rather stern demeanour among the team. Even crankandpiston Journals contributor Luca Cima was tight-lipped, and incredibly sensitive to the seriousness that was duly required. It is time again to apologise for the inane level of detail I am subjecting you to, but may I just say that watching the cargo hold of the car transporter swing open wide to bestow the sight of two manic man-eaters on wheels (one wild orange, the other white) could only be bettered I guess by a drawn-out tiebreaker between Sania Mirza and Maria Sharapova, nude. But only just. 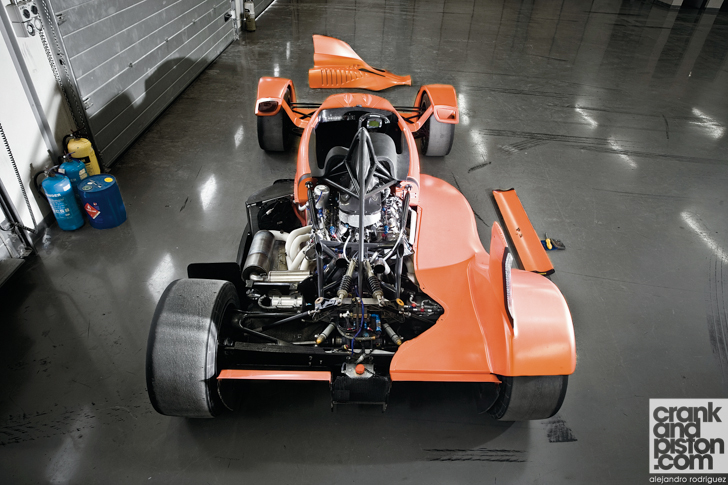 The inner child was desperately trying to break free, with an urge to impersonate a Harrier Fighter Jump Jet as the loading bay lowered the fully-loaded, fully running and frigging scary looking 75.1 inch wide T1 to ground zero. I thankfully contained myself. Nervous jokes of where you’d mount the number plates and a baby seat would fall on deaf ears today, anyway, as the awe booms around the pit garage. Bloody hell, does anyone here have the foggiest idea what we’ve just let ourselves in for? Thing is we didn’t have to badger or blag anyone to get this gig, as a matter of fact the exact opposite.

The agent for this remarkable machine is GulfSport Racing, in Dubai, who sell everything worth having motorsport wise, as well as marketing and maintaining Radical race cars, and Bassam Kronfli happens to be one of their finest drivers. Bassam (for those of you have been living under the same rock as me for the last year or so) is also a force to be reckoned with on the race track once he’s strapped into his carbonfibre Radical SR3, so in a nutshell Mr. Kronfli couldn’t be better qualified to drive the T1 if he tried.

I know for a fact – qualified or not – Bassam was beginning to feel the weight of the test on the big day though. I was sweating marrows and I was only here as a spectator. And making random comments about the Caparo being just a road car didn’t do a cat’s whisker to calm the atmosphere, or settle Bassam’s nerves either. After all, there are road cars that have an appearance of a race car. And then there’s a smattering of race cars that can just about get by on the public highways. This thing, well this thing is completely and utterly bonkers. Bonkers as a sketch, bonkers once built and bonkers now sat parked surrounded by a circle of flashing camera phones in one of the air-conditioned pit garages of the Dubai Autodrome. 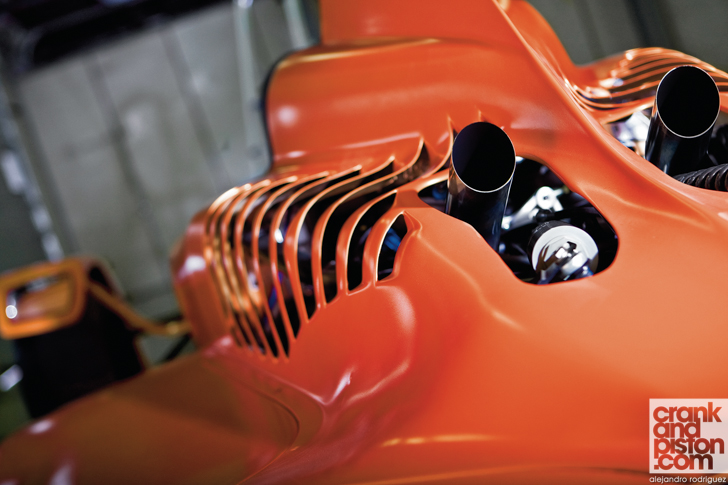 You’d have to be bonkers to even take up the suggestion that the T1 could and can be used on the open road. No doubt, this is a race car that even racing car drivers need to respect, with its mind-boggling 1075bhp per tonne; the highest power-to-weight ratio of any road-legal car to date, achieved by advanced carbon composites and – of course – 575bhp. The last of the long line of La La Land figures comes courtesy of a 3.5-litre Menard-designed V8 bolted directly to the carbon tub encased in an aerospace grade steel tubular spaceframe at the rear, a unit that was initially intended for Indy car racing. Once the bench project was concluded, so the story goes, the V8 was left redundant – so up stepped Caparo after recognizing the engine’s capabilities, later calibrating the horsepower figure at 10,500 rpm, along with 310lb ft of torque at 9000rpm.

Bolt this into an ultra lightweight carbon and aluminium honeycomb monocoque and you’re rewarded with a 0-to-100kph time of just 2.5 seconds, the same standstill but this time to 160kph in 5 seconds, which is faster than a base jumper in free-fall, so say’s the T1 brochure. Not that Bassam would know anything about that, fearing the first rung of a stepladder for goodness sake. But he doesn’t seem not too bothered about belting up in a hand-built fire-breathing rear-wheel drive Formula 1 car (or more accurately a GP2 car)  for the road, a car that happens to be built by a company specializing in composites and not (as it goes) cars, generally speaking. Crazy I tell you.

Crazier still is that the T1’s aero package generates enough downforce under high-speed cornering and braking to register 3.5g. For the record that is the level of force aerobatic pilots experience. I mention this because pilots undergo rigorous training, treat their bodies as a temple and live off health itself. Bassam – today’s figurative aerobatic pilot – loves shawarma, cheese and chive crisps and the speed dial button for 800-PIZZA. What’s more, the man only gets four hours of sleep a night at best and struggles to walk any great distance. This could be disastrous. But thankfully there is a separate impact-absorbing carbon composite structure attached to the front of the monocque, if the worst becomes us today. It is a tad dusty out on the track this fine Monday, after all. 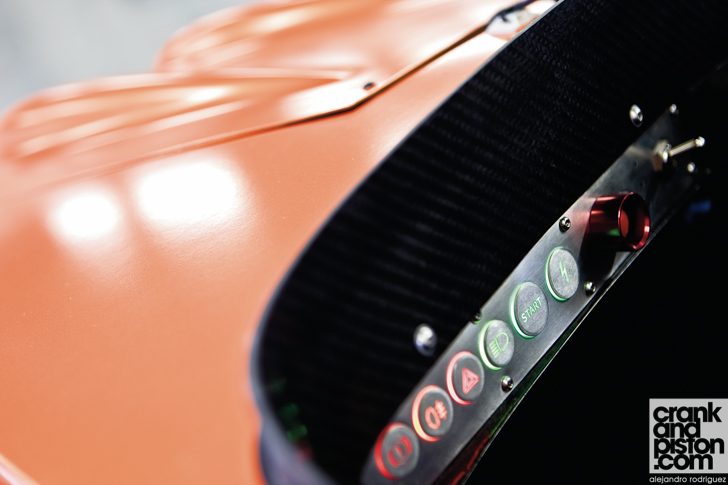 So while Bassam pops to the loo, to change into his superman outfit, gloves and helmet, I pop my head into the narrow cabin again – eyeing up the cockpit-adjustable brake bias and subtly checking the expiry dates of the six-point harnesses lacing their way through the narrow two-passenger cockpit – to note exactly where his last days on planet earth might be spent. I however would not be spending any time in the T1 this day (not even as a passenger) and as dictated by the War & Peace contract Bassam had to sign before being allowed to press the big brave starter button.

I have however read oodles of reports on the Caparo T1, watched an equal measure of reviews online too and the one thing everyone agrees on is the manner in which you have to juggle 575bhp and 310lb ft of torque off the line without embarrassment, or need for fresh rubber. By the looks of it Bassam has done his homework too, as he raises the counter to somewhere above 3000rpm. I am only able to unclench my fists once he makes a clean exit and is barking his way down the pit lane towards the track, away from the many eyes that have been glued to the glaringly flat matt orange supersonic hyper car from the second it arrived. It is now just Bassam and the T1, and as good a time as any to have a serious dig at the 2.6 kilometre Club circuit track record held by Bassam himself, in his carbon Radical. I guess all that there is left to say now, is take it away… and God speed.