Caterham F1 Team by the numbers

Little known facts you might not know about the recently sold Caterham F1 Team.

It’s no secret that the Tony Fernandes’ reign as team principal has now come to an end, the Queens Park Rangers owner having finalised a deal this week to sell the Caterham F1 Team to a conglomerate of Swiss and Middle Eastern companies. Former HRT managing director Dr Colin Kolles is expected to take up the mantel of team boss, whilst former Midland driver Christijan Albers will run day-to-day activities.

Here’s where things get complicated though. Although now no longer affiliated with the Caterham Group, the team will continue to run under its current name at least until the end of the 2014 season (and one does wonder if we’ll be seeing a Team Middle East next year when the Caterham name, presumably, disappears). For now then, we have a Caterham that is no longer Caterham, a team that at one stage was Lotus Racing/Team Lotus but which wasn’t actually Lotus. Not even slightly confusing then…

So, with (we assume) just 11 Grand Prix remaining of the ‘Caterham F1 Team’, we thought we’d take a closer look at the team, by the numbers: 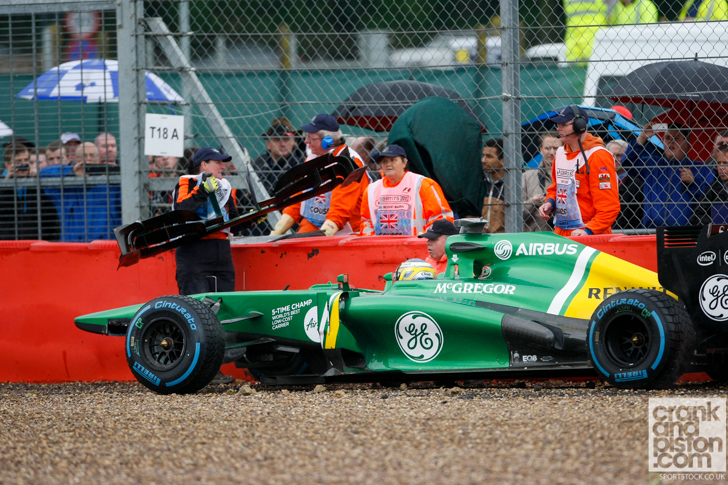 0: The number of points scored during Tony Fernandes’ reign as team owners, not just during the Caterham F1 Team era but also during its tenure as Lotus Racing (and Team Lotus). The fact that Caterham brought neither (0) of its cars home in its first race as the Caterham F1 Team (2012, Australia) may well have been a sign of things to come.

1: The number of former Grand Prix winners to have driven for Caterham in Formula 1, courtesy of ’12 driver Heikki Kovalainen’s victory in the ’08 Hungarian Grand Prix during his time with McLaren.

2: impressively, double retirements during a race weekend have struck Caterham only four times during its two and a half years of competition, oil pressure and hydraulics proving the CT05’s main Achilles heel. That and accidents like this… 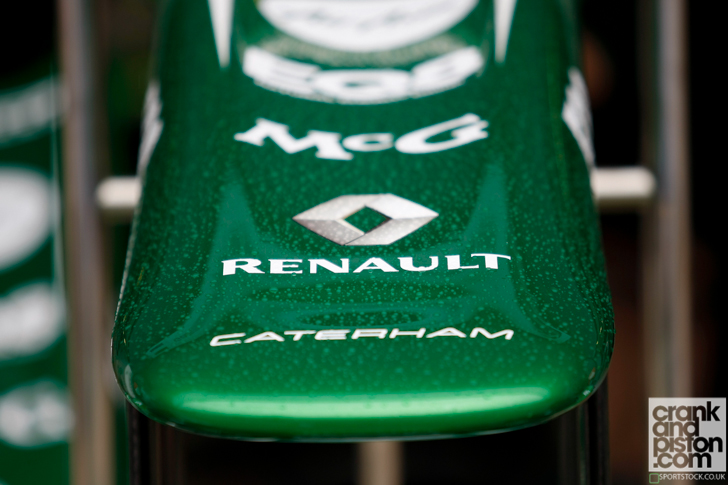 3: The number of years Alexander Rossi has been a Caterham reserve driver. The 22-year old American has been a GP2 driver with the company for the past two years having moved up the ladder after three years in the junior Formula Renault 3.5 category, where he competed against Daniel Ricciardo (Red Bull Racing), Jean-Eric Vergne (Toro Rosso), Kevin Magnussen (McLaren) and Brendon Hartley (WEC, Porsche LMP1).

4: the number of years the Caterham/Lotus outfit has used Renault engines, from 2.4-litre V8s to 1.6-litre turbocharged V6s. Indeed, Caterham last year signed a deal to maintain its relationship with the French engine company until the end of 2016 at least, but with Renault’s poor form compared to Mercedes this year – plus the news that Renault Sport F1 president and managing director Jean-Michel Jalinier has stepped down owing the performance issues on-track, the team may begin reconsidering its position.

CT05: The derivation of the 2014’s Caterham F1 singer seater, despite the fact the team has only been competing for three years. The team’s first car in 2012 – the CT01 – then led to the CT03 in 2013, the CT-02 being skipped owing to a clash with Caterham Cars’ road project by the same name. Similarly, the CT04 name was omitted for 2014 as this was the concept name for Aero Seven launched last September 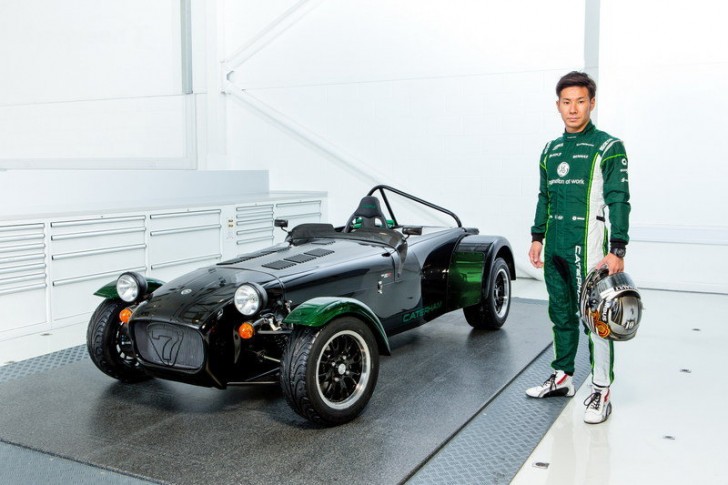 6: The number of drivers to have driven for Caterham F1 in the last three years, which amounts to a brand new driver line-up every year. Bizarrely, as well as six different drivers, Caterham’s drivers have also had six different nationalities, from Heikki Kovalainen (Finland) and Vitaly Petrov (Russia) in 2012, Charles Pic (France) and Giedo van de Garde (Netherlands) in 2013, and Marcus Erikson (Sweden) and Kamui Kobayashi (Japanese) this season.

7: Caterham’s most famous road-going model, and thus the most frequent model for special edition treatment. Recently the Group presented the new Caterham Seven Kamui Kobayashi Special Edition (complete with a while lot of carbon fibre) to further enhance Caterham’s standing in Japan. Ahead of the British Grand Prix, the Japanese’ teammate Marcus Ericcson took a 485 – the fastest ever road going Caterham – for a spin around the Northamptonshire circuit.

8: The 2012 Bahrain Grand Prix holds a special place in Caterham F1 history, when Heikki Kovalainen outqualified eight other competitors at the Sakhir International Circuit, a team record. Not only did the Finn outqalify both Toro Rossos, both Marussias and both HRTs, he even managed to pip Mercedes’s Michael Schumacher after the German hit problems. 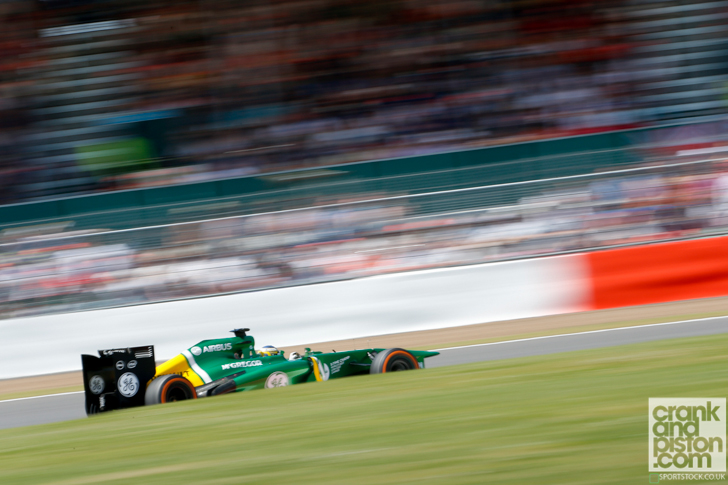 9: Marcus Erikson’s driver number for the 2014 season, the lowest number to ever appear on a Caterham F1 car (just pipping teammate Kovalainen’s #10)

10: The team’s best result in the Constructor’s Championship, achieved in its ‘debut’ season. Bested by Marussia in 2013, Caterham looks set to maintain its position at the bottom of the team’s pile (barring a massive upswing in form) following Jules Bianchi’s 9th place finish for Marussia at this year’s Monaco Grand Prix.

11: The best result so far for the Caterham F1 Team outfit, including the team’s two-year tenure as Lotus (’10-’11). At the Monaco Grand Prix, Marcus Ericcson brought his CT05 home in 11th place, equalling Vitaly Petrov’s position at the 2012 Brazilian Grand Prix, a non-points paying position that nonetheless secured Caterham tenth in that year’s Constructor’s Championship. 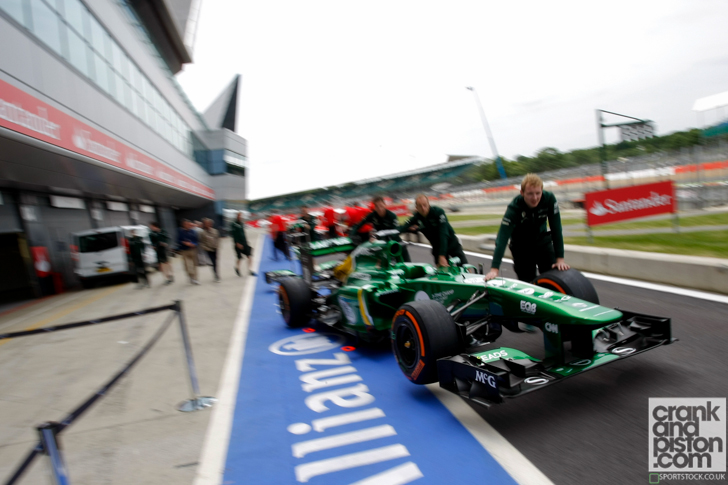 47: the number of Grand Prix in which a Caterham single seater has competed in an F1 race ahead of this weekend’s British Grand Prix

304: the combined total of Grand Prix starts for all six of Caterham’s drivers across their respective careers (ahead of this weekend’s British Grand Prix). Most experienced of the bunch is Heikki Kovalainen with 112 starts for Renault, McLaren, Caterham and Lotus. Having missed the 2013 season, Kamui Kobayashi has some catching up to do with 68 starts for Toyota, Sauber and Caterham. Rookie Marcus Ericcson will start his 9th F1 race at Silverstone.

3313.128: the total number of testing kilometres for Caterham ahead of the 2014 Formula 1 season, the seventh most of the F1 grid

Previous ArticleCaparo T1. Anyone for T?
Next Article Audi A5 Sportback. Behind the scenes at crankandpiston