1998 saw one of the most bizarre Grand Prix finishes in history, with Michael Schumacher taking the chequered flag in the pit lane. 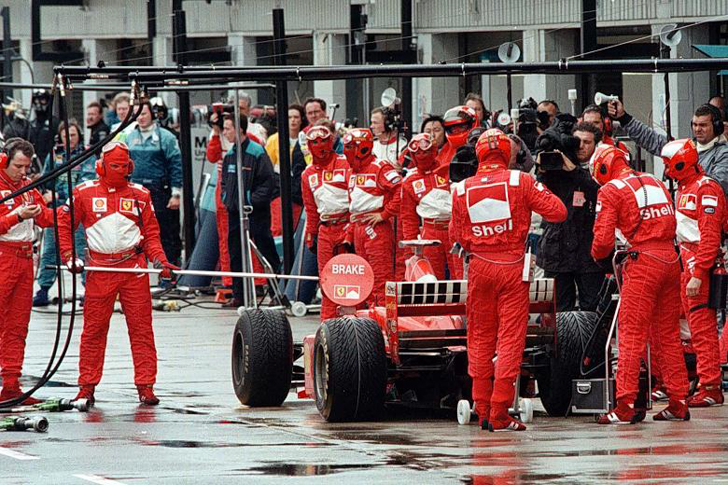 Ahead of this weekend’s British Grand Prix, Ferrari will be looking for an upturn in form, given Kimi Raikkonen’s recent announcement that his 2015 season with the Scuderia may well be his last. And on paper, Silverstone is as good a track as any to kickstart Ferrari’s season, the team having won in 2011 with Fernando Alonso and coming agonisingly close to a repeat victory one year later. The team’s victory in 1998 though with seven-time Formula 1 world champion Michael Schumacher remains one of the strangest finishes F1 has ever seen.

After a dry qualifying session that saw McLaren’s Mika Hakkinen grab pole by just under half a second, heavy rain hit the Northamptonshire-based Grand Prix circuit, eliciting a mad rush for intermediate tyres. Tricky conditions not withstanding, Hakkinen quickly disappeared into the distance, but worsening conditions, an impromptu 360 spin that damaged his front wing and the deployment of the safety car demolished the Finn’s 49s lead. Another off just two laps later gifted Ferrari’s Michael Schumacher the lead.

Schumacher was home and dry neither literally nor figuratively though when, with just two laps to the finish, the German was issued a stop-go penalty for passing Alexander Wurz’ Benetton under safety car conditions. To the amazement of all, Schumacher served his penalty on the final lap after crossing the finish line on pitroad. A bemused Hakkinen came home second some 20 seconds later, wondering no doubt what might have been.

The 1998 race – as well as being a steward’s nightmare – marked Schumacher’s first F1 victory in Britain was only the second time since 1979 that the Scuderia took the British Grand Prix.

Source – 780 Motorsports and The Times

Previous ArticleAwesome images from 2014 Goodwood Festival of Speed
Next Article Caparo T1. Anyone for T?